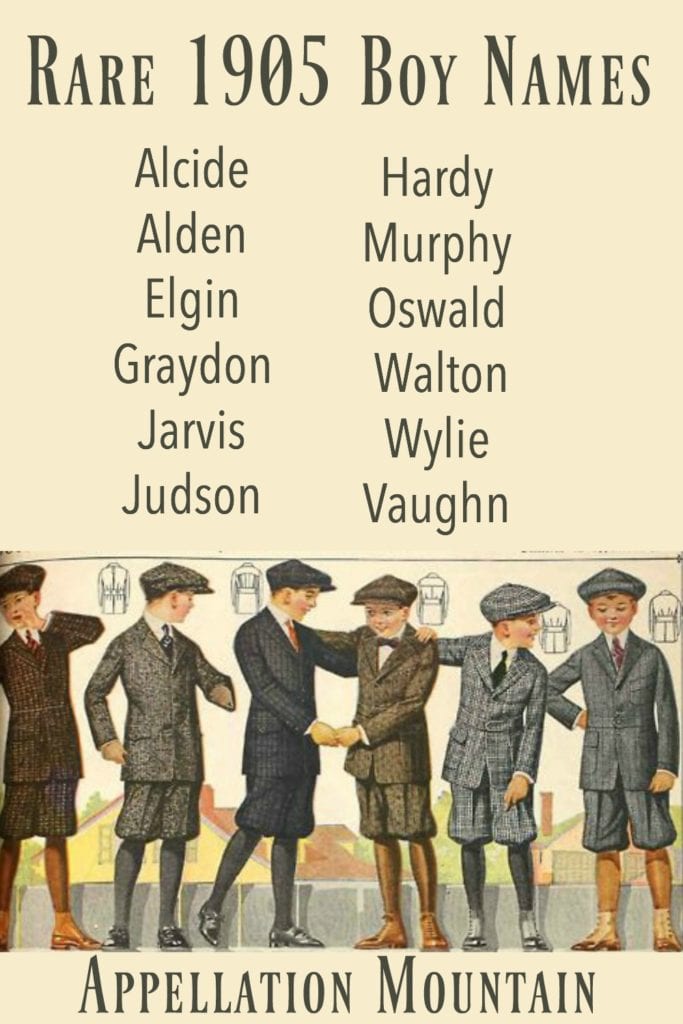 Rare 1905 boy names range from the curious – were the 10 boys named Finis really their parents’ last children? – to the surprisingly modern, like the 8 boys called Brooks.

In between the oddities and the names that we love today, some great choices await. Some names feel vaguely familiar, but many are all-but forgotten. A few of these might feel too antique or obscure for a comeback, but many seem surprisingly on-trend.

In 1905, nearly 20% of all boys received one of the Top 5 names: John, William, James, George, or Charles. By 2015, even the Top 25 names combined don’t account for 20% of all boys named that year. In other words: these names felt really rare back in the day, when names were far less diverse.

If you’re looking for a name with a history of use, but relatively uncommon today, these rare 1905 boy names might be for you.

This post is the fourth in a series. Read the others here:

Or just skip ahead, for a dozen of the best rare 1905 boy names.

Alcide – Alcide comes from Greek myth. The hero Herakles – better known by the Roman form, Hercules – also answered to Alkeides, derived from alke – strength. Alkeides became Alcides in Latin and Alcide in Italian. Today it looks vaguely French, thanks to Alcide Herveaux from True Blood. Despite the pop culture boost, the name is all-but extinct today. Just 8 boys were named Alcide in 2015. In 1905, Alcide ranked #837.

Alden – Maybe Alden will skyrocket this year. Young actor Alden Ehrenreich could boost the name. And it’s already at #720 today. But Alden has plodded along, never wildly popular, never completely fading from use. In 1905, it came in at #526. The name comes from surname borrowed from an Old English given name, Ealdwine. Ealdwine means old friend.

Elgin – Elgin ranked a comfortable #715 in 1905, but was given to just 25 boys in 2015. Most modern parents won’t recognize Elgin as a possible child’s name, and yet, it’s seen some use. Former NBA star Elgin Baylor comes to mind, and it also appears as a place name in Scotland, and other places named for the original. Today the sound is unexpected, but nearly any two-syllable, ends-in-n name for a boy will feel wearable.

Graydon – Given the popularity of Jayden and Grayson, you’d expect Graydon to be a fast favorite in 2017. Not so! In fact, Graydon is a one-hit wonder, appearing in the US Top 1000 only once, in 1905. 87 boys received the name in 2015, still far too few to make it back into the rankings. Proof that rare 1905 boy names can feel perfectly on-trend and nicely underused today!

Jarvis – Jarvis doesn’t appear in the current US Top 1000, but everyone knows the name. It’s Iron Man’s butler-turned-brilliant computer a character throughout the Marvel universe. Jarvis belongs on lists of hipster baby names, but that’s not necessarily a bad thing. It comes from an old saint’s name, derived from the Germanic element ger – spear. Back in 1905, Jarvis ranked #876.

Judson – We love Hudson and Jude, so why not Judson? Back in the day, it ranked #818. It probably comes from the given name Jordan via nickname Jud. Seldom heard today, Judson could fit right in with so many two-syllable, ends-in-n names for boys.

Hardy – With names like Brady, Riley, and Bentley in vogue, why not Hardy? Back in 1905, it ranked #960. That’s pretty rare, but today it feels even less common. Just 43 boys were given the name. Not only does Hardy feel like the surnames parents favor today, it also has a great meaning. Synonyms include healthy and strong. Another bonus? Thomas Hardy lends the name some literary sheen.

Murphy – Murphy feels friendly, an upbeat Irish choice that we don’t hear nearly as often as you might expect. Back in 1905 it ranked #583. Today Murphy fails to crack the Top 1000. Still, 148 boys were given the name in 2015, a respectable number. This name might especially appeal to parents who love the ocean: it means sea warrior.

Oswald – Back in the day, Oswald ranked #692. That puts it among the rare 1905 boy names. Time has faded Oswald even more, with just 26 boys receiving the name in 2015. Still, lately Ozzie has a sort of cool factor, a little bit rock and roll, a little bit retro name with a zippy twist. That could make all Os/Oz names feel a little more wearable. And, of course, Disney fanatics will know that Walt first created Oswald the Rabbit – the lesser-known forebear of Mickey Mouse.

Walton – We love two-syllable, ends-in-n names for boys, and W surname names like Walker have fared well. So why not Walton? Long associated with wholesome family television series The Waltons, it feels like a gentle name with plenty of substance. Walton ranked #663 in 2015, but has failed to chart in the US for years. Just 22 boys received the name last year. Fun fact: Indiana Jones’ real name was Henry Walton Jones. Why Walton? Creator George Lucas happens to share that middle name, too.

Wylie – Does Wylie belong with the rare 1905 boy names? I’m torn. After all, Wiley ranked in the Top 300 during the year. Wylie came in at a chilly #614. Today Wylie remains less common, though neither spellings appears in the current Top 1000. To be wily is to be tricky or clever; that’s one possible source of the surname name. Given the popularity of Riley, it’s surprising that Wylie never caught on.

Vaughn – Vaughn seems like a natural name for 2017. And, indeed, it ranks in the current Top 1000. Of course, Vaughn stands at #886 today and ranked #612 then, so it’s never attained household name status. If you love Graham and Grant and Reese and Bryce, Vaughn might appeal, too. The Welsh surname originally meant “little,” though the most famous of the modern Vaughns – Vince – is famous for being quite tall. It’s also the surname of an Alias character.

Would you consider bringing back any of these rare 1905 boy names?