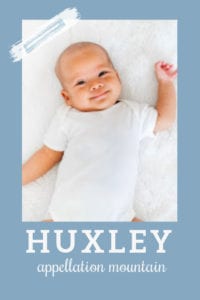 The baby name Huxley fits in perfectly with current trends, but it offers up more history than you might expect, too.

Thanks to K for suggesting our Baby Name of the Day.

Writer Aldous Huxley, of Brave New World fame, might be the best-known member of the famous English family.

But he’s not the only one. His grandfather, biologist Thomas Huxley, promoted Darwin’s theory of evolution when it was still new and controversial. Craters on both the moon and Mars are named in his honor.

The -ley is that familiar wood, shared with Ashley and dozens of other names.

But the first element seems to come from Hucc, an Old English given name. It might mean “to taunt.”

Maybe there’s a story there, but it’s lost to time.

A tiny village in Cheshire still bears the name, as do several other places throughout the English-speaking world.

While the baby name Huxley’s meaning remains obscure, we know why parents appreciate it.

But H also draws parents in, particularly when it comes to surname names. Hudson and Hunter lead the pack, but Hayes, Holden, Harrison, and Hendrix all rank in the Top 500, too.

The baby name Huxley combines the best of both trends.

In 1985, Tom Robbins gave the name to a female character in Jitterbug Perfume. While the book remains widely-read, it didn’t make an impact at the time.

Instead, back in 2002, seven boys received the name, putting in in the US Social Security data for the very first time.

One more reason this name feels so appealing? Built-in nicknames Huck and Hux.

Huck, of course, puts this name in the company of Americana literary figure Huckleberry – Huck – Finn. A handful of parents have used Huckleberry in full. (Think Bear Grylls, as well as Brad Paisley’s William Huckleberry.) Huck might even be an unconventional nickname for Henry – it’s two steps removed from Hank – or Charles, just drop the C in Chuck.

But Huxley will appeal to parents who want something more direct, but also less conventional.

Star Wars fans might also think of Domnhall Gleason as General Hux in the most recent trilogy. With Kylo and Anakin dipping in to the US Top 1000, any name from that galaxy far, far away seem more plausible than ever.

The baby name Huxley has gone from obscurity to near-mainstream success in just over a decade.

It’s no novel invention, but it shares all the sounds that parents love today in names like Jaxton, while claiming roots, just like so many successful surname names.

Chances are we’ll hear much more of this appealing name in the coming years.

Would you consider the baby name Huxley? 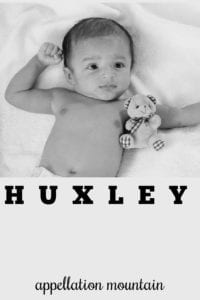