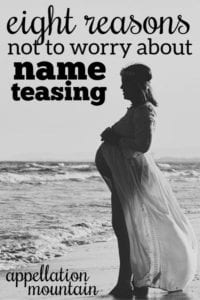 We love to worry about name teasing.

Strangers and our closest friends alike warn us not to use this name or that one, because it rhymes with something or brings to mind a fictional character or reality star. Or it sounds too much like an unpleasant slang term or obscure medical reference. Maybe it’s plain weird, or other undesirable.

These comments are almost inevitably couched in genuine concern. Some of them come from a good place.

And yet, over the years, I’ve come to hear all of the many comments like this:

I don’t care for that name.

Because fears of name teasing? A handful might be worth pondering. But the vast majority can be safely ignored. Here’s why.

YOU MIGHT BE THE ONLY ONE WHO HEARS THE NAME TEASING

So often someone will comment, “don’t use that name because …”

And I think that never in a month of Sundays would I have imagined that Winnie is too witchy or John sounds like unfortunate slang. Is Alexia a brain disorder? Yes. Is that my first thought? Not even close.

If you worry that someone will spell Annalee with one N, or can’t un-hear that unfortunate rhyme? Then yes, feel free to skip the name. But the overwhelming majority of threats of name teasing? They’re based on something that might never come up again.

About eight years ago, a former colleague named his son Cullen. “But what about Twilight?” I asked, more than a little horrified. “Never read it,” he replied. “And who’s gonna think we named our kid after a vampire romance in another twenty years?” At the time, I thought he might be over-confident. But turns out he was right. I hear Cullen and think nice Irish surname, not Edward and Bella.

Now that my oldest is in high school, I have a built-in test for whether something is still culturally relevant. It turns out that a huge amount of trivia that rattles around in my brain, forming automatic associations, is lost on my kid’s generation.

So when your mom tells you that Vera is a ditzy diner waitress or Beau is stuck in Hazzard County? Reboots happen, but know that there’s a good chance that your children will never get the reference.

Often we insist that a kid will be teased for having a name that’s different. Too old-fashioned, too new, too foreign, too obscure. But some kids fare just fine as Rocket or Amalswintha.

There are plenty of reasons I think unusual names aren’t a problem, but it really comes down to this: plenty of people have unusual names, and they report all sorts of feelings about them. The same is true for kids with very popular names. They love ’em, hate ’em, or maybe don’t think much about them. Since you cannot possibly imagine your child’s preferences – they won’t be known for years – you might as well trust your instincts.

Of course, plenty of names we warn others about are really The Next Big Thing. I did this for years with Maverick, but really? It’s in the current US Top 100 now, and seems pretty darn ordinary to me these days.

Or back when I was in my late teens, Henry was still a fusty, dusty name in style limbo. Until I met the cutest soccer player with the name – curly hair, even a dimple. Swoon! Henry was instantly transformed for me.

Name teasing imposes our tastes, preferences, and histories on everyone else – never a good idea.

WE SURVIVE AWKWARD SURNAMES, TOO

Related to the point above: rarely do I hear others insist that handing down a family surname is cruel. Though they can be every bit as tongue-twisting and cumbersome as many an obscure given name – more, really. We’ve all come across surnames that sound like body parts or swear words. Remember that Saturday Night Live sketch where Nicolas Cage plays Mr. Ahz-wee-pay?

And yet, we assume that family surnames have value that outweighs any potential awkwardness.

STORIES BEHIND A CHOICE CAN OFFSET FEARS OF NAME TEASING

Have you ever dismissed a stranger’s name choice as downright awful … and then heard the story, and realized it was anything but? Gertrude sounds hopelessly old-fashioned, but when it honors a truly amazing great-grandmother, everything changes. Or I’ll never forget hearing Pharrell explain why he named his firstborn Rocket.

When the reasons are so very rock solid, it can make any worries about name teasing fade into the background.

ALL NAMES ARE SUBJECT TO SOME KIND OF TEASING …

The thing about name teasing is that it’s everywhere. I’ve heard ugly plays on Elizabeth and Joseph, mean comments about Margaret and William. If the most bedrock choices of the last few centuries are subject to such barbs, then really, why bother trying to avoid it?

THE PROBLEM IS THE TEASING. NOT THE NAME.

Because here’s the thing – and this is really, really important.

It’s not the name. It’s the teasing.

Name teasing is a problem for the same reasons it’s flat-out awful to mock someone for the color of their hair, for an overbite or a limp, for their religious beliefs or the language they speak. Add whatever you like to the list … name teasing is teasing. And while I suppose there’s playful teasing, when it crosses the line to cruelty and bullying, it is unacceptable.

Because it’s not about names. It’s about strength and power and authority and all sorts of other complicated things.

It’s no surprise that name teasing often attacks choices that belong to marginalized people – we say that “black” names will never get a callback for a job interview, that foreign names are “too hard” to pronounce. We argue for “normal” names, supposedly as a kindness to the child. And maybe there’s a kernel of truth to that. It might be easier to go through life as Ava instead of Shifrah or Inayah.

But … so what? We don’t insist our children abandon the things that make them special. We don’t blindly buy them “what everyone else is wearing” or insist they give up basketball for snowboarding, because it’s what’s popular now.

We wouldn’t accept our children being teased for their clothing or their religion or … well, anything. Names are just another example.

Your turn: how do you feel about name teasing? Do you worry about it when choosing names? 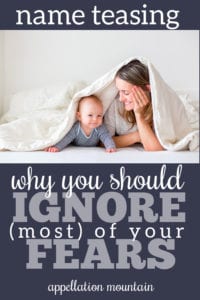 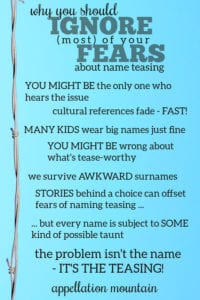