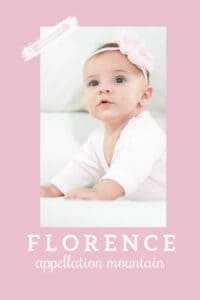 The baby name Florence is a vintage favorite making a comeback.

The baby name Florence sounds botanical, but there’s more to the story.

It comes from the Latin florens – flourishing. The term implies prosperity and success. Florere means to flower or to bloom. That makes it part-nature name, part-virtue. And, of course, an ecovintage pick, too.

Back in the ancient world, Florentia was the feminine form of the Roman name Florentius, with saints aplenty answering to the names and related forms. Florian comes from the same roots, but outside of Harry Potter, where Florean Fortescue owned the Diagon Alley ice cream parlor, it’s fairly obscure today. Florencia is another feminine form.

There’s the masculine Florent, Florens, and Florenz, too, as well as Flora, Florabel, and lots of other sometimes-heard Flor- names. But the -ence ending feels especially well-established.

Early days, Florence served as a masculine name. Several Counts of Holland and their descendants were known as Florence – or Floris – in the Middle Ages. The name remained masculine in Ireland for even longer, mostly because Florence substituted for several Irish language names. The seventeenth century archbishop and theologian Florence Conroy was born Flaithrí Ó Maolchonaire, to name just one.

Plenty of us hear the name and immediately think of Italy.

None other than Julius Caesar founded the famous city all the way back in 59 BC.

During the Middle Ages, the city served as a trading center. By the Renaissance, it was a hotspot for the arts. The powerful Medici family called Florence home, and it even briefly served as the capital of the third iteration of the Kingdom of Italy.

Over two thousand years after its founding, it remains a favorite destination. Places galore have been named after the Italian original.

In the nineteenth century, the city of Florence welcomed the well-to-do Nightingale family – William, Fanny and daughter Frances Parthenope. Parthenope was named after her birth place, and when the Nightingales welcomed a second daughter, she became – naturally – Florence.

Despite her family’s objections, the younger Miss Nightingale grew up to pursue a career in nursing during the Crimean war, revolutionizing health care and saving countless lives. She established the first professional school of nursing, authored the first textbook in the field, and made practical innovations that changed hospitals forever.

The pioneer of modern nursing makes this name nothing short of heroic.

Her fame also boosted the name into wider use, thanks to the popularity of the  Lady with the Lamp.

While it is sometimes heard as a surname (think celebrity chef Tyler Florence), most of the time it evokes Nightingale’s courage, the romance of the Italian city, or a botanical flair.

Back in the nineteenth century, it became one of the most popular picks for parents. From 1887 through 1906, the name ranked in the US Top Ten. It remained in the Top 20 through 1924, falling slowly afterwards. By 1982, it had left the rankings entirely.

Still, at its heights it was powerfully popular, and that meant nicknames galore. There’s Florrie, of course, but also Flossie.

The Bobbsey Twins series appeared between 1904 and 1979, featuring two sets of twins. Nan and Bert were the elder siblings, with Flossie and Freddie the younger. I’m not clear if the series ever gave any of the four a formal name, but it seems likely that a Flossie born early in the twentieth century would really have been a Florence.

During the name’s heyday, plenty of famous Florences were born, including:

By the 70s, television featured two sassy Florences: The Jefferson’s fictional maid, and Alice’s fellow waitress at Mel’s Diner, Flo. There’s also Little Britain’s Florence Rose from the early 2000s. None of them make Florence feel quite like a baby’s name.

FLORENCE and the MACHINE

Florence Welch is the lead singer of indie rock band Florence + the Machine. They’ve been together since 2009. They’re bigger in Britain than the US.

That might be true for the baby name Florence in general.

And the baby name Florence started rising in use early in the twenty-first century in the UK.

The American revival followed, rising gradually in use around 2010 and returning to the US Top 1000 in 2017.

With names like Charlotte, Abigail, and Eleanor in the US Top 100, it’s easy to imagine Florence fitting right in.

From heroine Florence Nightingale to indie rock’s Florence + the Machine, this name feels strong and determined.

But there’s a lightness to Florence, too. Maybe it’s all of the nicknames, from Flossie and Florrie to Fee and Flo. Or, speaking of Flo, the upbeat Progressive salesperson has made this a household name again. The character debuted in 2008.

While the baby name Florence remains nicely unexpected in the US, it might just be the next vintage girl’s name revival to race up the popularity charts.

What do you think of the baby name Florence? 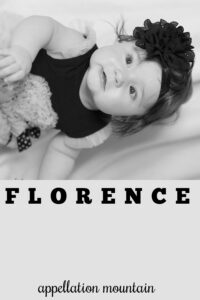 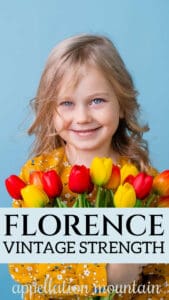