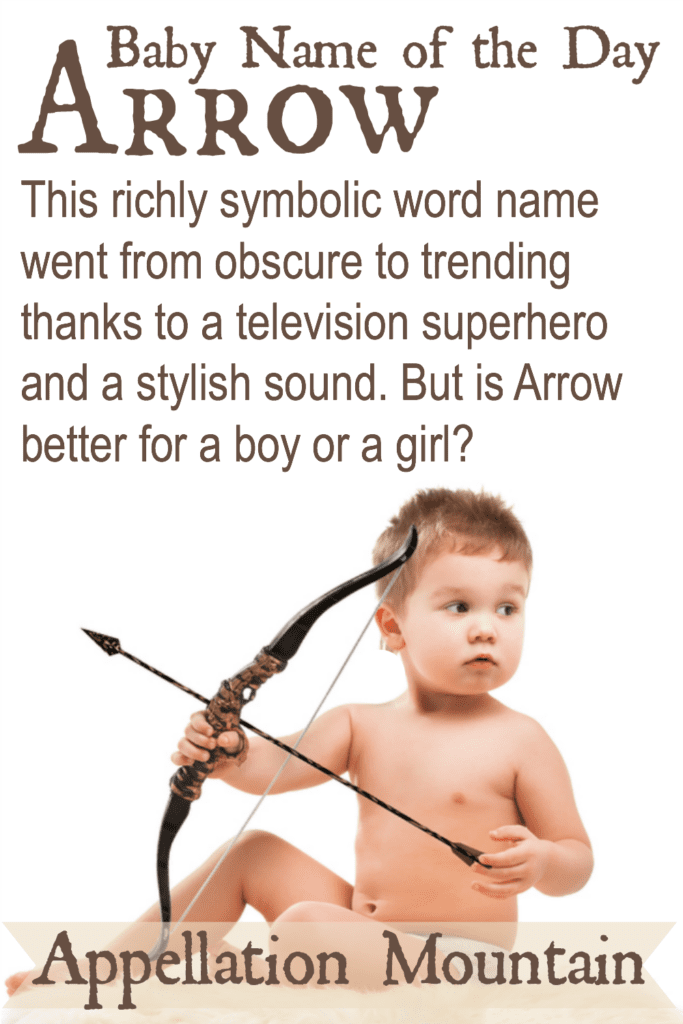 A new celebrity birth announcement inspired our Baby Name of the Day.

We’ve been shooting with bows since before written history. Think Upper Paleolithic before. They feature in mythology – Artemis, of course, but she’s not the only one – and remained a major force in warfare through the medieval era.

The word, however, appeared relatively recently. Up until the 1300s, we called them flos or staels in English.

Around the time we adopted our current word, the weapons were becoming obsolete in warfare.

Unusual given names sometimes start out as surnames. In the case of Arrow, it was sometimes heard as a place name, likely from a Celtic word meaning stream, though other origins are possible.

Other surnames related to archery abound, including:

Arrow: By the Numbers

We can find Archers and Fletchers in the nineteenth century. But Arrow? Not so much. The name is virtually unknown until recent years.

The name has been used for ships and automobiles, missiles and musicians. But most bearers of the name fall into a specific category: superheroes.

Or even just plain romantic heroes. Robert Louis Stevenson created a knight known as the Black Arrow for an 1888 historical novel.

Since then, there’s been:

But mostly it’s all about Green.

Billionaire businessman Oliver Queen debuted as a DC Comics crimefighter back in 1941. Like any comic book character, Queen endured revisions and reboots. His son briefly replaced him. And unlike many characters, Queen rarely appeared in adaptations.

Remember the year this name really caught on?

2012 marked the debut of The CW’s Arrow. Oliver Queen appeared in Smallville briefly, but this time the DC Comics series made him the star. Stephen Arnell plays Queen.

The series has succeeded, lasting for five seasons and counting. It has also inspired a list of spin-offs in the same universe.

Drama abounds for the playboy turned vigilante, and danger, too. As the show has flourished, Queen’s alter ego has caught on as a given name.

The name offers more than just a superhero tie-in.

Arrows indicate direction and finding your way. They convey an appealing, near-virtue meaning, too – hitting your target, achieving your goals. Others suggest that they symbolize protection, courage, or friendship.

They bring to mind famous archers, too. There’s Robin Hood, known for stealing from the rich and giving to the poor. The huntress, Artemis in Greek and Diana in Roman myth, takes the name in another direction. Other female archers of renown include Disney’s Merida and The Hunger Games‘ Katniss Everdeen. On the masculine side, add William Tell, Legolas, and Hawkeye of The Avengers.

And, of course, Cupid shoots them to deliver true love.

Lastly, there’s the name’s stylish sound to consider. With boy names ending in ‘o’ like Milo and Arlo, this name fits right in.

But that’s equally true for Margot and Marlowe.

Overall, Arrow makes a bold choice. Richly symbolic, there’a bravery about this name. But it’s more wearable than you might think.

Now that Jensen Ackles has given the name to his newborn daughter, it might be just the push needed to tip this name into the Top 1000.

What do you think of Arrow? Better for a boy or a girl?