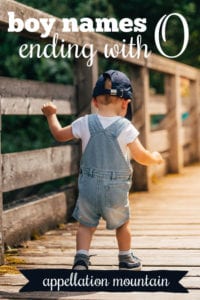 Once rare – at least for native English speakers – they’ve gone mainstream. From king of the jungle Leo to romance language staple Diego to modern possibilities like Cairo, plenty of o-enders dot the US Top 1000, in a style to suit every namer.

Of course, rarities exist beyond the Top 1000. Our openness to boy names ending in o means that some of these could wear very well, indeed.

It feels like part of a bigger trend, a sea change in how we name our sons. Vowel endings once were rare, but now our most popular names include Noah and Elijah, Levi and Eli.

Whether you prefer to stick to mainstream favorites or are looking for something really daring, some of the boy names ending in o will almost certainly appeal to you.

Alex names have had a good run in the last few decades, so no surprise that Alejandro is popular, too. It’s the Spanish form. Meanwhile, Italian Alessandro ranks much lower on the list, but also benefits from the o-ending sound.

Actors and athletes have made this romance language form of classic Anthony broadly familiar, and very wearable.

Beau means handsome in French, and you might hear it used to refer to a boyfriend. Bo might have Swedish roots – or Chinese! And longer forms of both spellings abound, from modern Bowen to gentlemanly Beauregard.

Speaking of James, Diego is another Spanish form. (Drop the San from Santiago, and you can almost hear it.) We all recognize it, thanks to San Diego, artist Diego Rivera, and Dora’s cousin. Thiago and Tiago belong to the same family, with Thiago ranking in the US Top 200, not for behind Diego.

Em- names have long topped the charts for girls. Emilio and Emiliano offer the same sound for our sons, but with a romance language spin.

Does good ol’ Joe belong on this list? We consider Joseph among the most classic of boy names. And while just Joe (and Joey) regularly appear in the US Top 1000, we don’t necessarily think of them as separate names. And yet, Joe feels friendly and approachable. It’s an upbeat name, one that I trust to fix my car, do my taxes, or care for my children.

The lion rules the jungle, and Leo comes up near the top of the boy names ending in o list. So do lots of longer Leo names, including Leonardo. Hollywood A-Lister Leonardo DiCaprio put his long, romantic first name on our radar. Long before he boarded The Titanic, the name belonged to the legendary Leonardo da Vinci … and his Ninja Turtle namesake.

Back in the 1980s, Milo felt edgy and obscure. Want proof? Punk band the Descendants were fronted by Milo Aukerman, and their album Milo Goes to College is a classic of the genre. Then we all fell in love with Miles, plus lots of boy names ending in o. Now Milo sounds like the (little) boy next door again.

Santiago means Saint James in Spanish. Confusing, right? Remember that James and Jacob share the same roots. In Biblical Latin, the name was Iacobus … which became Iago in Spanish. It’s wildly popular across the Spanish-speaking world right now, including in the US.

More parents prefer Theodore in full, but Theo isn’t too far behind. There are plenty of good reasons to skip the formal name, so no surprise o-ending Theo is trending.

Any Doctor Who fans out there? The Tenth doctor, David Tennant, famously cried “Allons-y, Alonzo” in an episode. That translates to “Let’s go, Alonzo!” But most parents are probably thinking of figures like basketball great Alonzo Mourning. Both spellings are from Alfonso; removing the ‘f’ modernizes the name nicely.

Brad Pitt made Aldo a tough guy name in the 2009’s Inglorious Basterds. Despite the ‘o’ ending, this name is actually falling in use.

Take the Old Norse Alvar, add an ‘o’ and you’ll arrive at the Italian and Spanish Alvaro Verdi used it in an opera, based on a Spanish drama. It’s a globe-trotting name benefiting from the ‘o’ and the ‘v’ sounds.

Odds are you know an Angelo – or three – but masculine forms Angel and Angelo have never been quite as popular. Surname form DeAngelo is another.

A name borrowed from a Greek god, Apollo was boosted by singer Gwen Stefani when she gave the name a son in 2014.

Arlo is an up-and-comer, likely to join Milo and Leo near the top of the charts soon. It carries a certain indie spirit thanks to folk singer Arlo Guthrie. And there’s a Disney-Pixar connection, too.

Take Herman, send it through the romance language-izer, and sophisticated Armando emerges. Fun fact: it’s the given name of Miami-born megastar Pitbull.

Parents love Ben names, from Benjamin to Bennett to Benedict. Benicio shares roots with that last one, both derived from the Latin benedictus – blessed.

Once reserved for the heavy in gangster movies, Bruno now carries all the charm and sophistication of Bruno Mars.

Place names are fair game, from Hudson to Savannah. The Egyptian capital is spelled with a C, but parents preferred the K spelling for their sons in 2018.

Basketball star Carmelo Anthony put this unusual name on the map when he was a first-round draft pick in 2003. His long and successful career continues, as does his influence on boy names ending with o.

Another name from the world of sports, Cristiano Ronaldo is a Portuguse footballer widely regarded as one of the best players of all time.

We love Elijah and Elias. Eliseo belongs to the same family, a name that feels modern, but claims Old Testament roots.

It’s tough to see this name and not break into the ABBA song. It’s cousin to the classic Ferdinand, and shortens to nickname Nando.

If Diego fits, wtih ties to a California city and a popular saint, then Fransicso must, too. Lin-Manuel Miranda gave the name to their second son in 2018.

It could be short for any of the Italian Gio names, from Giovanni to Giorgio. And Geo might even serve as an unexpected George nickname.

Jairo is the Spanish form of the Old Testament name Jair. It’s got a great meaning – he shines.

Take the Italian Enzo, add a K, and suddenly you’ll have the Japanese Kenzo. Designer Kenzo Takada used the name for his luxury brand.

It sounds like Kylo-with-an-o, which could be an appealing sound. Star Wars fans know that Kylo Ren is the villain for much of the latest installment in the series.

Leander comes from Greek myth, a name formed from “lion” and “man.” It’s Leandro in romance languages – possibly even fiercer than the original.

Long and elaborate Luciano turns Luke, Lucas, Luca, and even Lucian up to eleven. As for Luco, it feels like a twist on Luca, inspired by Nico.

Hugo has been big in the UK, as well as Sweden, France, and Spain in recent years. It’s a true culture-spanning choice.

Marcel is seldom heard, but add an ‘o’ and the name changes. It’s derived from Roman name Marcus, the same source for Marco. Marco appears in not one, but two, Dr. Seuss stories.

Unisex Nico belongs to the Nick name family, one of the most vibrant and modern of the group.

A Germanic name that feels antique and quirky-cool.

Rocco made headlines when Madonna and Guy Ritchie gave this saintly, Italian heritage choice to their son way back in 2000.

It’s not just the Beckhams naming their son Romeo. This Shakespearean name takes a little something from Roman, and a lot from boy names ending in o.

Sergius is the Latin, Sergei the Russian, and Serge the English – though we’re never embraced the latter. Sergio fits right in with so many romance language boy names.

Aero refers to flight – think aeronautics and aerospace. Eero is the Finnish form of Eric. Neither is often heard as a given name in the US, but they could work.

A seventh century saint’s name, Braulio might mean sword. Or possibly it means bright. Either way, it’s a rarity that fits in with tough guy o-enders like Rocco and Bruno.

To play con brio indicates that musicians should play in a lively fashion. After generations of boys named Brian and Bryce, Brio isn’t a stretch.

The name of an ancient Roman statesman, Cato means wise. It took on a different sheen when the OJ Simpson trial propelled Kato Kaelin to reality star-status. But the next generation might see it as more of an ancient name, thanks to its use in The Hunger Games.

The Spanish word for sky as well as heaven, Cielo feels a little bit nature-name, and a little bit spiritual, too.

Change a few letters, and the entire vibe of a name is transformed. Corrado is the Italian form of Conrad. The latter feels buttoned-up and traditional; on the other hand, Corrado sounds more like a romantic hero.

The Spanish and Italian form of Cyrus, Ciro could fit right in with Mateo and Luca.

Another Hollywood-inspired surname, DeNiro is all Robert.

One of Zoe Saldana’s sons is Bowie Ezio. The middle name means eagle. If you’re worried that Enzo feels too common, Ezio could substitute nicely.

Stargazers, look no further for your son’s name! Worried that being named for world-changing astronomer Galileo Galilei is too much? It shortens to Leo.

Romance language smoosh names could inspired their own list. Gianfranco, Joseantonio, and more occur sometimes in English – and far more regularly in languages like Spanish and Italian.

Hornblower. Alger. There’s something jaunty about Horatio, a name that feels big and bold.

An Old Testament name, Jethro has a great meaning – abundance. To some, it’s probably stuck on the Beverly Hillbillies, but it could also read as a bold, homespun choice, an alternative to rising choices like Arlo.

Laszlo is the Hungarian form of Vladislav, via the Latinized form, Ladislas. The spelling is confusing; doubtless that’s why we’ve seen Lazslo and Lazlo in the US, too. Though they’re all quite rare.

The Spanish form of New Testament name Lazarus might make an intriguing choice.

Most likely a cousin to Mateo, Maceo offers a long and impressive history. But despite Halle Berry choosing the name for a son in 2013, Maceo has yet to catch on.

Another Renaissance Artist/Teenage Mutant Ninja Turtle name, and another romance language smoosh, Michelangelo comes in at a dramatic five syllables.

Neo means new, but it also means Keanu Reeves’ character in 1999’s The Matrix, plus all the sequels that followed.

Machiavelli and Paganini answered to this first name, a romance language spin on traditional Nicholas.

Oswald feels antique, possibly too much. But Osvaldo’s v and o combination might put it on the same track as Alvaro.

Royal names have been big, from Kingston to Reign. Why not Pharaoh?

Pedro is the Spanish, while Piero and Pietro are Italian forms of classic Peter. If you know your Avengers, Pietro is the given name of Quicksilver.

The Jolie-Pitts gave this name to a daughter, but they weren’t the first to use it. A Biblical place name, as well as the site of a Civil War battle, Shiloh has seen sparing use for years. It offers a great meaning: tranquil.

The name of a famous Danish astronomer, stands-out Tycho shortens to fits-in Ty.

Once relatively common, Roscoe has become rare, but might qualify as a neglected gem.

What are your favorite boy names ending in o? 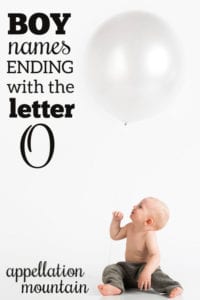 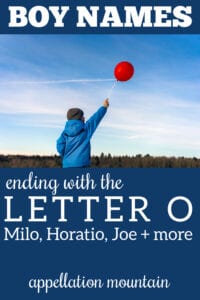