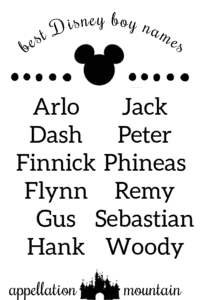 Sure, we tend to focus on all those girls named after princesses. Jasmine and Ariel, I’m looking at you. But the boys get names every bit as daring and creative and yes, influential, too.

A bonus with Disney boy names? They tend to fly under the radar. We love Elsa, but the character – and her “Let It Go” anthem – stamp the name with the royal seal of Arendelle. None of these dozen choices feels nearly as wedded to the character – even though a few clearly succeeded thanks to a generous sprinkling of pixie dust. In fact, the only boys’ name that seems too tied to Disney might be Mickey himself.

This list draws from Disney and Pixar flicks, but I’ve not touched the extensive Marvel Avengers universe, and Star Wars? Well, you can find my favorite picks from a galaxy far, far away right here.

Now, on to my picks for a dozen of the best Disney boy names.

The Good Dinosaur isn’t the best known movie. The 2015 Disney-Pixar release imagined what-if a friendly apatosaurus could team up with a caveboy, thanks to an alternate timeline where the extinction-causing meteor swept right past our planet. The caveboy answered to Spot, and the dinosaur? He was called Arlo. But even if it the movie wasn’t a smash sensation, it definitely helped boost Arlo. The name stood at #500 in 2015, and has since reached #271. It fits with Leo and Milo and so many o-ending boy names we love right now, so no surprise a little bit of Disney magic helped make it more popular.

The Incredibles debuted in 2004, and then, fourteen long years later, the sequel came along. In between, American parents took to naming their boys Cash, Nash, and Dash – just like the only son of Mr. and Mrs. Incredible, Dashiell Robert Parr, known for his super-speed. The first two names were influenced by music and television, but Dash seems to owe its rise to the Disney-Pixar movies. Only a handful of boys were named Dash prior to the first movie. In 2005, we welcomed 35 newborn Dashes. And by 2014, the name had cracked the US Top 1000, where it remains today. While long form Dashiell has never quite caught on, Dash feels like an almost mainstream favorite today.

This name brings to mind the Hunger Games trilogy’s handsome and heroic Finnick Odair. But Zootopia gave us Finnick, the fennec fox. He’s a tiny con artist, partner to Nick Wilde, at the beginning of the movie. But not everything is what it seems in the early scenes, and Finnick – along with Nick – ultimately redeem themselves. American parents are all in for Finn, with Finnegan and Finley and just Finn rising in recent years. But Finnick remains relatively rare, despite rising dramatically in use since the 2016 release of Zootopia.

Flynn Rider sounds quite dashing, the kind of name you’d expect on a romantic hero in a Disney princess flick. And we do meet the character in 2010’s take on the Rapunzel story, Tangled. But the movie is full of surprises. Flynn’s real name is Eugene. And the princess? She mostly saves herself. And Flynn/Eugene, too. While Flynn owes something to the success of Finn, Tangled played a big part, too. In 2010, just 81 boys were named Flynn. By 2011, that number rocketed to 212 births, and 339 in 2012. The name peaked in 2015, and has fallen slightly since, but remains a Top 1000 go-to. One more factor? Orlando Bloom, star of so many Disney Pirates movies, named his son with Miranda Kerr Flynn in January 2011.

So far, all of our Disney boy names have come from twenty-first century productions. But Gus takes us all the way back to 1950. Kind and loving Cinderella has always had mouse companions, pressed into service as stallions to pull her pumpkin coach by the fairy godmother. But the House of Mouse gave them names: Jaq and Gus-Gus. (Fun fact: their formal names are Jackson Checkers and Octavius!) The mouse didn’t boost his given name back then, but with so many August names rising in use, Gus seems more fashionable than ever. The 2015 live action Cinderella might have helped, too.

Let’s head to Monterey, where our favorite blue tang fish makes her way in 2016’s Finding Dory. She meets all sorts of sea creatures in captivity. There’s a whale shark named Destiny and a concussed beluga called Bailey. But much of the action involves a cranky, seven-tentacled octopus called Hank. It’s an unconventional source of inspiration for a baby name. And Hank was clearly trending upwards in use long before we traveled the ocean blue with our forgetful friend. But in 2014, just 448 boys received the name. By 2016, that number was 632. Formal name Henry also gained in use, so there might be even more Hanks.

Sparrow and Skellington put this name on the list, but there are other Jacks in various Disney universes, too, like the youngest son in The Incredibles and Cinderella’s mousey friend, mentioned with Gus. It’s a traditional choice for a son, with an all-boy vibe, the name of fictional action heroes and men of accomplishment alike. And if a Disney fan names his son Jack, he’ll have costume choices galore, from pirate to pumpkin king and beyond. Because of all this, it’s tough to say that Disney has bolstered the name, but Jack now stands at #19. So it certainly hasn’t hurt!

Like Jack, Peter doesn’t immediately bring to mind all things Disney. But Peter Pan has been a key part of the media empire, ever since Disney adapted JM Barrie’s enduring 1904 novel into a 1953 animated classic. We’ve been off to Neverland ever since. Peter is the boy who won’t grow up, but does mature – at least a little. Disney had also adapted the folk talk Peter and the Wolf as an animated short in 1946. It’s a classic name that feels boyish, but wears nicely on a grown man, too. With a live action remake titled Peter Pan and Wendy in the works, this name could get a big screen boost in the coming years.

Factor in the Disney Channel, and we find even more influential name choices. But this list includes just one: Phineas, of long-running animated series Phineas and Ferb. The stepbrothers embark on all sorts of projects during their endless summer vacation. There’s also jealous sister Candace, and a pet platypus named Perry … who doubles as a secret agent. The show ran for an epic 222 episodes, a fan favorite that made it into the Disney parks in Epcot’s World Showcase, and have had meet-and-greets, too. Before the show debuted, Phineas was given to just 66 boys in 2006. Then the first episode premiered in 2007. By 2010, 141 boys received the name. While it’s yet to break into the US Top 1000, it seems like the adventurous animated boy did inspire some real life families.

Ratatouille starred a Parisian rat who loved to cook. Improbable? It’s Disney. Actually Disney-Pixar. The movie debuted in 2007, and Remy doubled in use between 2006 and 2008. By 2009, it entered the US Top 1000. Our new love of surname name Remington helped push Remy into the spotlight; so did the X-Men universe. Remy LeBeau, aka Gambit, debuted on screen in 2009’s X-Men Origins: Wolverine. Rumors of a Gambit-centered movie starring Channing Tatum circled for years, but the movie never made it to production. Still, between the comic book character and the cuisine-obsessed murine, Remy has risen to a modern favorite. Plus, X-Men are now part of the Disney universe, so who knows? Like Jack and Peter, there may one day be multiple Remys represented in Disney boy names. One more reason to keep an eye on Remy: the rat will soon feature in an attraction at Disney World, based on a successful ride that first debuted in (of course!) Paris.

When it comes to spectacular names, The Little Mermaid’s Horatio Thelonius Ignatius Crustaceus Sebastian takes the prize. The royal court composer to King Triton under the sea, he’s a constant companion and advisor to Ariel, the mermaid at the center of the action. The crab was part of the 1989 smash hit movie, the first of the Disney Renaissance. Sebastian sings the lead on “Under the Sea,” the film’s Academy Award-winning anthem. In 1988, Sebastian sat at a familiar, but chilly #455. By 1990, it ranked #320. Sebastian entered the US Top 100 in 2000, and has climbed steadily since, a long-neglected traditional embraced by parents for this generation. With a live action remake of the classic film expected shortly – and Daveed Diggs stepping into Sebastian’s claws – could this name climb even higher?

The hero of all four Toy Story movies makes this name effortlessly Disney. He’s all over the theme parks, too. But there’s a second Woody – actor Harrelson, part of the Star Wars universe as Beckett in the Han Solo prequel. The actor’s given name is Woodrow, and in many ways, that name could work today. But just Woody belongs with the best Disney boy names. As casual as Jack or Hank, Woody feels like a folk hero. Before we met the sheriff, there was singer Woody Guthrie, among others. One drawback: controversial filmmaker Woody Allen might give some parents pause. But the average kid thinks of the Disney-Pixar character first and foremost – and, since the original Toy Story movie came out way back in 1995, that’s true for a new generation of parents, too.

What are your favorite Disney boy names? 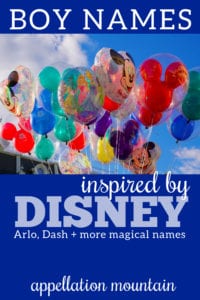 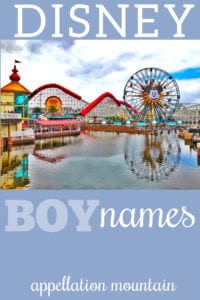