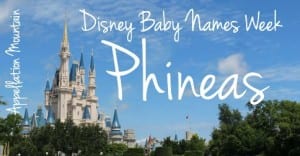 Disney put this fictional kid on a permanent summer vacation, and parents responded by giving the name to their real-life kids.

Thanks to Kathleen for suggesting Phineas as our Disney Baby Name of the Day.

The name might refer to someone from Nubia, via an Egyptian name. Others suggest it has Hebrew roots.

Either way, the Biblical character was a zealous priest credited with stopping a plague. How, you ask? He executed an Israelite man who was having an affair with a non-believer. It was enough to have Phinehas appointed High Priest of Israel. It’s a heavy story, one that might not feel quite right to modern parents. And yet, we do love our Biblical boy names. Always have.

Politicians, inventors, and religious leaders have worn the name. It’s the P in P.T. Barnum.

And yet, this name remained on the fringes – even after Julia Roberts named her son Phinneaus in 2004.

But that’s changing for two reasons. First, we’ve embraced Finn, along with many formal name possibilities.

But the second one? Pure Disney.

The Disney Channel debuted Phineas and Ferb back in 2007. It aired regularly beginning in 2008.

Phineas Flynn is American. Ferb Fletcher is his English stepbrother. The Flynn-Fletcher family also includes Candace Flynn, who is not a fan of her brothers’ experiments.

The boys’ goal: to make the most out of their summer vacation. They build a roller coaster, discover the lost city of Atlantis, and help out an alien called Meap.

The family also includes pet platypus Perry, who wanders off a lot. That’s because Perry is also a secret agent charged with defeating the bumbling and evil(ish) Dr. Doofenshmirtz.

No matter how outlandish the boys’ adventures, they’re never caught by the Flynn-Fletcher parents. Big sister Candace sees everything, and her attempts to “bust” the boys is a major part of many an episode.

The show has just wrapped up a long and successful run, with an hour-long episode in June 2015 titled Phineas and Ferb: Last Day of Summer

Phineas: By the Numbers

I would have guessed that Julia Roberts got credit for the name’s revival, though her 2004-born son is Phinneaus, called Finn.

But the numbers give this one to television:

Every spelling of the name has been more popular since the animated character debuted.

Disney can’t take all of the credit, though. This name also succeeds thanks to:

Disney’s biggest service may have been to help us choose a dominant spelling for the name. Phineas has always been a little more common; now it’s the spelling that springs to mind for many a Disney Channel viewer.

And yet, no spelling of the name has ever cracked the US Top 1000.

With Atticus embroiled in controversy, Phineas might emerge as an alternative. It’s rare, on trend, and associated with a smart, generous, and downright fun character from pop culture.

How would you spell Phineas?