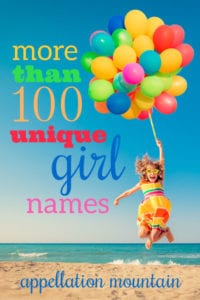 Unique means one of a kind. When it comes to names, that sets the bar pretty high. Just ask the 123 parents who named their children Unique last year. (Can you imagine going through kindergarten as Unique H.?)

Finding a truly one-of-one name would mean opting for something that might not be very name-like at all. Draxlee, maybe. Or Porcelain.

Instead, most parents try to strike a balance between the often-heard and the less familiar. If that’s your mission, moving beyond the most popular 1000 names in the US might be enough to satisfy your craving for the uncommon.

And so unique girl names won’t belong to only one girl in all the world … but there’s a very good chance that your daughter will be the only one in her class, and possibly in your circle of family, friends, and acquaintances, should you choose from this list.

Some of these might be wildly popular elsewhere in the world, but for American children? They’re distinctive enough to merit the title unique girl names.

Acacia – A tree name that shares a little bit with Cecilia and Amelia.

Adira – With the meaning strong, this Hebrew name feels confident.

Afton – A river name immortalized in poetry by Robert Burns.

Alba – The Spanish and Italian word for dawn, with lots of other possible meanings, too.

Agnes – An antique name with a powerful meaning – holy – and a spiritual vibe. Don’t believe it works in 2019? I direct you to the Despicable Me sisters.

Amethyst – A gemstone name associated with February, but name-like enough to work for any time of the year.

Artemis – An ancient goddess of the hunt, and a strong name for a daughter born today.

Arwen – Borrowed from Lord of the Rings, with the meaning noble maiden.

Aveline – Another word for hazelnut, and a cousin to Ava and company, too.

Aviva – Lively in sound and meaning, it’s the Hebrew word for spring.

Avril – We’ve all heard of April, but the French twist on the month name is even more intriguing.

Billie – Willa and Willow are the go-to William-adjacent names for girls, but Billie feels like a retro, edgy, and upbeat option.

Blythe – An archaic word with a timeless meaning: happy.

Bree – Oscar winner Brie Larson puts this mini name on the list, no matter how you spell it.

Calista – A Greek name meaning most beautiful. Callisto is an even rarer option.

Calla – As in the lily, an alternative to chart-toppers like Ella and Stella.

Carina – As much a night sky name as Luna or Stella, this constellation resembles the keel of a ship.

Carys – From a Welsh word meaning love, though Karis is the slightly more common spelling.

Cecily – The medieval form of Cecilia, far rarer in the twenty-first century.

Cielo – The Spanish word for sky – and heaven. The similar French Ciel might be another choice, though perhaps the pronunciation is a little less clear.

Cleo – A regal name straight out of Egypt, with a twenty-first century -o ending. Clio is an even rarer spelling.

Clover – A nature name with a lucky streak.

Coralie – From the word for coral, making this French import a nature name.

Cordelia – Romantic, Shakespearean, and a cousin to fast-rising Cora.

Cosette – A name straight out of Les Mis, but very wearable today.

Damaris – A New Testament name, delicate and distinctive at once.

Darby – This surname claims Old Norse origins but an English feel, and while it leans unisex, it’s quite rare for any child today.

Echo – A nymph from Greek myth, and a haunting word name.

Edie – As sweet as Sadie or Molly, but far rarer.

Eisley – A surname with a great meaning: iron strong.

Eleni – Yet another cousin to Helen and Elena, this one Greek in origin and downright fun to say.

Emerald – Glittering Emerald is rarer than Ruby or even Pearl, but still shimmers.

Evolet – Invented for a fading movie, it’s derived from the phrase “the love.”

Flora – A pan-botanical sharing the sounds of fast favorites Nora, Cora, and Aurora.

Geneva – A gorgeous Swiss city associated with peace, thanks to a number of international treaties. It sounds quite a bit like Genevieve and other girl names, too.

Georgette – A feminine form of George, far less often heard than place name Georgia, and also a type of fabric, named for an innovative French dressmaker.

Guinevere – The tragic queen of Arthurian legend, and a cousin to former mega-hit Jennifer.

Harriet – We all recognize Harriet, but rarely choose it for our daughters.

Hermione – A Harry Potter heroine worthy of emulation, and a name associated with the messenger of the Greek pantheon.

Hollis – A surname name related to holly, but with a modern, unisex vibe.

Honor – Take our favorite virtue names, like Grace and Hope, and Honor fits right in.

Ida – In our age of Ava and Mia, Ida remains surprisingly neglected.

Indigo – A unisex name in the hue of blue.

Isadora – As dramatic early twentieth century dance legend Isadora Duncan, with some of Isabella’s appeal, too.

Italy – Place names continue to gain in use, so why not Italy? Sicily and Ravenna come to mind, too.

Justine – Slightly more subtle than Justice, and not nearly as time-stamped to the 1980s as Justin.

Kinsey – A surname that’s teetered on the edge of the Top 1000 for years. Possibly a future Kelsey.

Lake – A strong word name every bit as appealing as other nature-inspired choices.

Larissa – An ancient city, a Greek nymph, and a pretty sound that’s quite rare. Larisa is even less common.

Lavender – A Harry Potter character, and a great alternative to Violet.

Linden – Another tree name, and an update to mid-century favorite Lynn/e.

Lotus – Among the more exotic of the floral possibilities.

Lourdes – A French place name associated with the Virgin Mary. Also, the name of pop legend Madonna’s now grown-up firstborn, which lends it a certain edge.

Lula – A vintage Louise nickname that might work independently today.

Lux – The Latin word for light, pronounced both lukes and luxe. Short, unisex, and powerful in sound.

Maple – A tree name that brings to mind Canada, and the rich colors of autumn.

Maribel – A lovely smoosh of Maria and Isabel.

Mariella – Mary remains the classic, but Maria elaboration Mariella has promise as one of the unique girl names of our time.

Marigold – Originally a flower name, marigolds come from the phrase Mary’s Gold, which lends this name a spiritual vibe.

Marjorie – A mix of medieval Margery and the spice marjoram.

Marlowe – A sleek surname with an upbeat o ending.

Millicent – Sweet, innocent, and traditional, with the energetic nickname Millie.

Navy – A color name that succeeds thanks to sound, as well as ties to the military branch.

Noelia – Like Noelle, a Christmas-inspired name for a daughter, but one that belongs with unique girl names.

Novella – Sure, it’s a type of short novel. But the -ella ending makes it feel feminine, and Nova is among the newest of white hot choices.

Ocean – River ranks in the Top 1000 for boys and girls alike, making this water name a natural possibility.

Odette – A rare borrowing from ballet.

Persephone – In Greek myth, she’s the bride of Hades, ruler of the underworld. Her return to earth brings back the spring, and her departure gives us winter.

Petra – A feminine spin on Peter, as well as the name of an ancient city.

Pippa – Pippa Middleton may have been the world’s most famous bridesmaid’s, but the royal relation has yet to see her name spike in use – at least in the US.

Primrose – A twist on classic Rose that feels fresh and springlike.

Ridley – A little edgier than Riley.

Salome – A Biblical bad guy, but a gorgeous name.

Sahara – The world’s largest desert, and a captivating sound.

Sakura – The Japanese name for cherry blossoms, richly symbolic and harbingers of spring.

Soleil – The French word for sun, pronounced so-LAY. Made more familiar by the famous Cirque de.

Susanna – All Susan names are out of favor, but Susanna and Susannah feel like on-trend options.

Sybil – From Downton Abbey to Vampire Diaries, pop culture keeps pushing this name into the public view. Parents haven’t embraced it … yet.

Tabitha – A New Testament name with a bewitching backstory.

Talitha – An Aramaic name heard in the New Testament.

Tallulah – A rarity with roots in Gaelic and Choctaw.

Valencia – A Spanish city and a famous orange.

Vita – From the Latin word for life. Vida is a related option.

Verity – An underused virtue name with universal appeal. It comes from the Latin verus – truth.

Zella – Ella with a Z, but also a name with several possible meanings, including happy, zealous, and shadow.

Zia – A New Mexico heritage name that fits perfectly with Mia, Lia, and Gia, as well as our affection for high value Scrabble letters.

Zinnia – Another seldom-heard botanical possibility, at least as wearable as the more popular Azalea. And the flower symbolizes some lovely ideas: constancy, lasting love, and remembrance of fond memories.

I could go on – and on! Unique girl names make for a fascinating list. What are your favorites? And what have I missed? 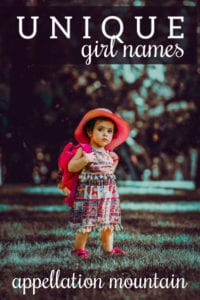