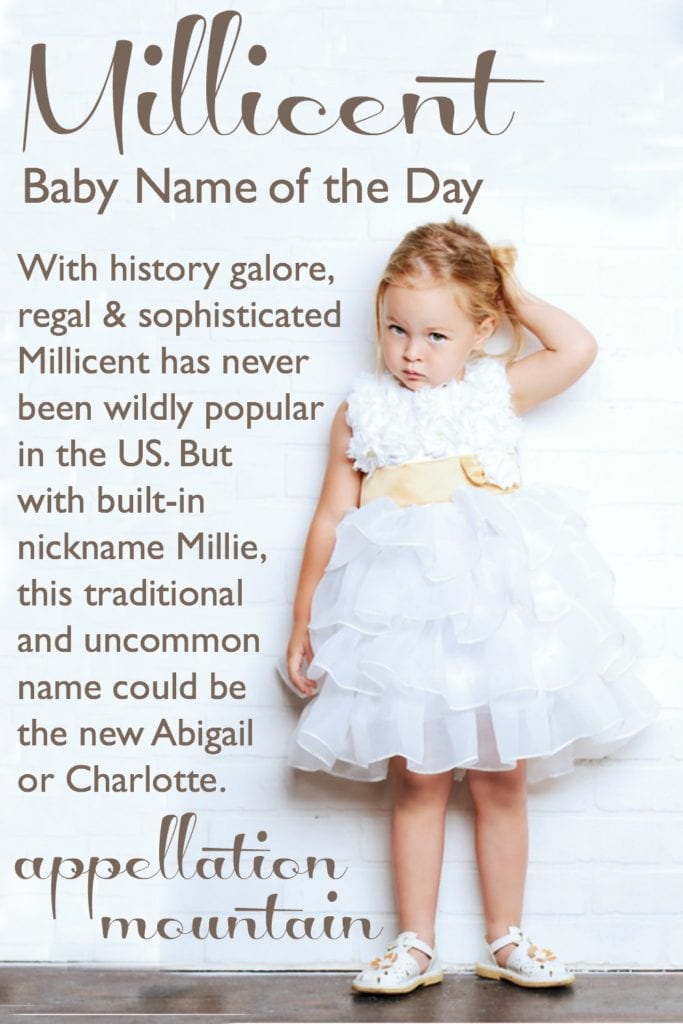 Millicent has languished in style limbo for too long. With Amelia and Evelyn in the current US Top 20, why not this sweetly vintage name?

Thanks to Katharine for suggesting today’s Baby Name of the Day.

Millie fared slightly better. Around the year 1900, it hovered around #200.

Only Millie ranks in the US Top 500 today, while Mildred teeters on the edge of extinction. American parents do adore Mila, though, so perhaps the Mil- names are on the upswing.

The Germanic name Amalswintha was transformed into the Frankish Malasintha and the French Melisende over the centuries. The Dictionary of Medieval Names from European Sources lists two queens and a princess who wore some form of the name.

At least one of them was quite formidable. Amalaswintha, daughter of Theodoric the Great, served as regent of the Ostrogoths in the 520s and 30s. The princess was described as learned and wise, an excellent diplomat and ally of Justinian I, Byzantine emperor. She ruled the kingdom for her 10 year old son. When she was assassinated, Justinian took it as signal to invade.

Amalswintha comes from amal – work or bravery – and a second element, meaning strong.

Melisende and Melisent came to England with the Normans. From 1131 to 1153, Melisende reigned as Queen of Jerusalem.

In England, the name continued to evolve, eventually reaching the current form.

Thoroughly Modern Millie took place in the 1920s, but was actually a product of the 1950s and 60s. In fact, the movie came out in 1967, and the Broadway musical version debuted in 2002. Modern, indeed.

The tale tells of a small-town Kansas girl who moved to Manhattan, bobbed her hair, and donned a flapper dress in search of love and money.

You might also think of a very famous doll. Barbie’s full name is listed as Barbara Millicent Roberts.

More recently, Lisa Yee gave us Millicent Min, Girl Genius, the heroine of a 2003 children’s novel. Factor in two minor Harry Potter characters, and the Millicent Bystander references from 2006 animated movie Flushed Away, and a generation of kids is growing up with the name.

Of course, the English love their nickname names: Charlie and Alfie, Evie and Elsie. While plenty of informal choices are gaining in the US, too, many parents still prefer a formal name.

This opens the question: will Millie take off, following Ellie up the charts? If so, does that leave Millicent neglected, or will it slowly catch on, too?

If you adore Charlotte and Abigail and so many buttoned-up girls’ names that rank in the current US Top 100, Millicent seems like a logical substitute. Millie fits right in with Maddie and Molly and Ellie, while Millicent remains distinctively different.

Can you imagine this name catching on today?

This post was published originally on July 20, 2008. Following substantial revision, it was re-posted on March 22, 2017.