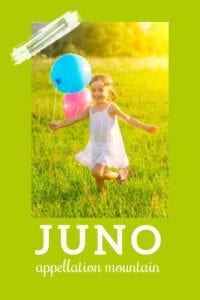 The baby name Juno combines a high energy sound with all the appeal of an ancient goddess.

Thanks to Kae for suggesting our Baby Name of the Day.

As with many mythological names, there have always been a few girls called Andromeda and Hera, Pax and Juno.

Even now, with ancient names very much in favor, few goddesses have left the heights of Olympus to appear in the US Top 1000.

That includes the baby name Juno.

And yet we instantly recognize it.

The name comes from the same roots as the Latin juvenis – young.

In the Roman pantheon, she’s wife to Jupiter. Theirs is not exactly a happy marriage, and too many tales of Juno focus on her husband’s philandering. Virgil’s Aeneid makes her quite cruel.

And yet, Juno is queen of the gods. Her portfolio is diverse. She dresses for battle, unlike her Greek counterpart Hera. Many of her roles involve protecting her people, particularly women.

That’s a thumbnail sketch of a complex figure, but suffice to say that the baby name Juno offers quite a legacy.

The goddess also lent her name to the month of June.

If the baby name Juno remains relatively rare, June is comparatively common. From 1915 through the 1930s, it appeared in the US Top 100. From Leave it to Beaver’s homemaker extraordinaire mom, June Cleaver, in the late 1950s to the early 2000s Disney Channel’s adventure, art and classical-music loving Little Einsteins, the name has remained in steady use.

Other June names – like Junia and Juniper – also have potential.

But it’s Juno’s bright ‘o’ ending that makes this name sound so full of energy.

You might also think of Juno as a place name.

First there’s Juno Beach, a real town in Florida. It was also a designation the Allies gave to part of the D-Day landing site at Normandy during World War II.

But Juneau is most familiar on the map.

The capital city of Alaska was named for settler Joe Juneau. It’s said Joe bought drinks for those who assembled to cast a vote for the new city’s name.

But as it happens, Juneau also traces its roots back to a word meaning young, so Juno and Juneau not only sound exactly the same, but they’re cousins, too.

Almost no one was choosing the baby name Juno for their daughters. Not until the late 1990s, when a handful of girls received the name.

1924 drama Juno and the Paycock was written by Irish playwright Sean O’Casey. It could’ve influenced a few parents, but the numbers don’t suggest that it did – at least not in the US.

Instead, it took an indie movie titled Juno to generate more interest in the name. No goddesses involved. Actor Elliot Page played a regular teenager, facing regular teenage challenges – until an unplanned pregnancy makes things even more complicated. Page earned an Oscar nomination for as the would-be teen mom.

A small but steady number of boys also received the name. Credit to Junot, as in the Dominican-American writer Junot Díaz. The ‘t’ is silent.

Many a ship, a few celestial objects, the Canadian music awards, and an old school Honda scooter have answered to the name Juno. Musician Will Champion, of Coldplay, named a daughter Juno. And British director Julien Temple named his daughter Juno. She’s now a successful actor in her own right.

That’s an interesting number – so few that the baby name Juno remains obscure. But it’s also enough that it feels increasingly familiar.

Overall, the baby name Juno presents an intriguing choice for a daughter. It’s edgy and cool, a thoroughly modern name. But it’s ancient, too, a name borrowed from history and literature, with a handful of namesakes across the ages. If you’re after something just outside the mainstream for a daughter, this name might belong on your list.

What do you think of the baby name Juno? 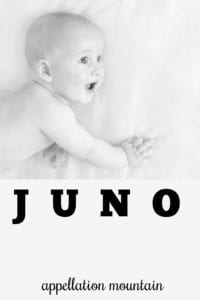