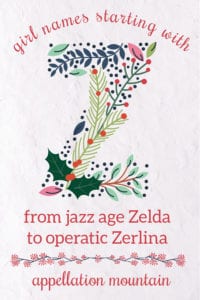 Girl names starting with Z sit at the end of the alphabet, but they’ve become style stars in the last few decades.

From mini Zoe – no matter how you spell it – to elaborate Zariyah and Zaniyah, more girl names starting with Z appear in today’s Top 1000 than nearly any year prior.

That hasn’t always been the case. In some years, zero names beginning with Z appear on the girls’ charts.

But now, the final letter of the alphabet comes in a respectable eighteenth place in terms of popular first initials – even ahead of the letter T.

Maybe it’s because we love our high-value Scrabble letter names these days. After all, along with Q, Z offers a whopping ten points. Name your twin girls Zoey and Quinn, and their names would add up fast.

But there are some plain great Z names, inspired by a mix of foreign imports, creative inventions, and names that just sound a little zippier when they begin with the letter Z.

Nickelodeon series Zoey 101 prompted us to add a ‘y’ to Zoey, just like Joey.

This mini Greek import comes with a big meaning: life.

Sarah is down-to-earth and classic, but Zara? Zara sparkles.

Zariah might be Arabic in origin. Or possibly Hebrew. What’s certain is that Zariah is on the rise.

A name meaning happy, Zelda is forever associated with the jazz age thanks to Mrs. F. Scott Fitzgerald, a novelist in her own right.

An Arabic name with a great meaning – bright.

A cousin to Hailey and Kaylee, but maybe with a nod to the saintly Zelie, too.

A third spelling in the Zaria/Zariah category.

Possibly borrowed from Zaniah, the traditional Arabic name for a star.

A Slavic word meaning dawn, and a slightly more daring alternative to Nora, Cora, and Aurora.

A Slavic spin on popular Zoe.

Popular at the turn of the twentieth century in the US, this name’s origins are unclear. But it fits in perfectly with girl names beginning with Z today.

An Arabic name possibly meaning beauty. Thanks to a significant figure in Islam, it’s been embraced by Muslim families across the world, in multiple spellings.

A Shona name meaning thankful, Zendaya makes the charts thanks to a talented young actor.

Another spelling of rising favorite Zuri.

An Arabic name with two possible meanings: shining, or helper.

Possibly short for Suzanne, or maybe a feminine form of John.

A Spanish surname with an intriguing sound. It’s the middle name of one of Matt Damon’s daughters, Gia.

In French, Zazie is short for Isabelle or Frances, a sparky short name put on the map by actor Zazie Beetz.

Either a cousin to Adelaide or a French form of Azalea, Zelie is on parents’ radar thanks to Saint Zelie Martin, canonized by Pope Francis in 2015.

An ancient Greek name related to the god Zeus, Zenaida is also a genus of doves. They’re named for Napoleon’s niece, Zénaïde.

Another take on Zenaida, Zenobia was the name of an ancient queen. Nathaniel Hawthorne used it for a character in his 1852 novel The Blithedale Romance.

A creative spin on Mia, a short form of names ending with the right sound, or maybe from the Zia sun symbol, featured on the flag of New Mexico.

An unusual flower name with a zippy Z.

It might be short for many names ending with the right sound, but there’s also a thirteenth century Saint Zita.

From a Hebrew name meaning radiant.

A Spanish take on Zoe.

An Arabic name, Zoraida is most famous as a character in Cervantes’ Don Quixote.

In Polish, Sophia becomes Zofia, and Zosia is the nickname. Actor Zosia Mamet rhymes her name with Sasha.

A rare name used in Persian literature from the Middle Ages onward, usually associated with Potiphar’s wife, a minor – and previously nameless – character from the Book of Genesis, as well as the Quran.

A nickname for Susan and related names, Zuzu is forever famous as the youngest daughter of George Bailey in Christmas classic It’s a Wonderful Life.

What are your favorite Z names for girls? What would you add to this list? 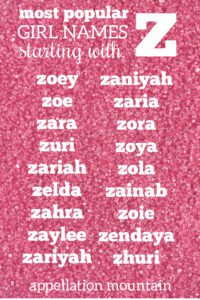 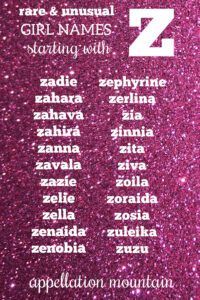 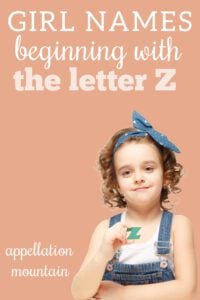