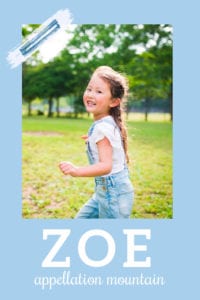 The baby name Zoe fits right in with twenty-first century favorites, like Ava and Ivy. But it comes with ancient and storied roots, a name with history to spare.

Thanks to Julia for suggesting our Baby Name of the Day.

We all know Eve, the first woman in the Book of Genesis.

It means, roughly, breath or life. (Which feels like almost the same idea, right?)

When Alexander the Great conquered much of the ancient world in the fourth century BC, he spread Greek culture throughout the ancient world. In the newly Hellenized areas, the Hebrew Eve became the Greek Zoe – also meaning life.

It’s been a given name ever since.

In the third century, Saint Zoe of Rome perished under the Diocletian persecutions. Word is that she prayed by the tomb of Saint Peter.

There’s an earlier saint by the name, too, who also suffered martyrdom. She’s particularly revered in the Orthodox Church, along with her husband Hesperus, and their two sons.

Saints often explain why certain names endure, and this may be the reason we hear the baby name Zoe over the centuries in the ancient world.

In 978, Zoe was born, daughter of the Byzantine Emperor. Naturally, her father arranged an advantageous marriage. She almost wed the Holy Roman Emperor, except he died while she was aboard a ship, sailing for their wedding. Instead, she returned home and married a Byzantine aristocrat.

The rest of her story rivals a soap opera for plot twists.

Zoe threw over her husband for a servant, who became the emperor upon their marriage. She lost a power struggle that ended with her new husband’s nephew taking the crown – but the public objected. After years of feuding with her sister, Theodora, the pair briefly reigned as co-empresses. There’s (so much) more, but suffice to say that all of these twisting tales cemented the name in the history books.

The baby name Zoe remained in use, at least in the east. In the late 1400s, another Byzantine princess, Zoe Palaiologina, married Grand Prince Ivan III of Moscow – where she became known as Sophia.

By 1806, the baby name Zoe surfaced in France. That’s the year Zoe Labouré was born in Burgundy. She was a farmer’s daughter, not a Byzantine princess. But her birthday fell on the feast day of the original Saint Zoe, wife of Hesperus, and so she was baptized accordingly.

Her family mostly called her Catherine, her baptismal name, and that’s the name by which she’s known.

As a young woman, she joined the Sisters of Charity. After a series of visions, Catherine introduced the Miraculous Medal, a symbol exalting Mary. It remains significant today.

Given Saint Catherine’s universal use of her baptismal name, it’s tough to imagine that she caused an uptick in the use of the baby name Zoe.

But here’s something that might’ve made a difference.

In 1859, Irish-born playwright Dion Boucicault debuted a play in New York that would become a smash hit. Titled The Octoroon, it told the story of forbidden love between a Southern plantation owner and a woman who is an octoroon – 1/8 black. Her name? Zoe.

In the British production, the couple ends happily, with wedding bells. In the American version, Zoe dies.

The story was set in Louisiana, so the name Zoe clearly read as French. The play was based on a novel written by Thomas Mayne Reid, a writer who had spent time in New Orleans.

Before the baby name Zoe takes off in the US, there’s a detour.

Author JD Salinger introduced us to the Glass Family in the 1950s. They featured in multiple stories published in The New Yorker, and later, in novels. The seven Glass children included youngest daughter Franny, and youngest son Zachary – known as Zooey.

Despite the widely read stories, Zooey never took off as a given name – not until Zoe’s rise.

We know that the baby name Zoe was steadily used in small numbers – two or three dozen – from 1880 onward. The numbers increased slowly, but remained modest. Still, it ranked in the US Top 1000 nearly every year.

Zoe started to gain in the 1970s. A handful of minor figures cold explain the rise.

Other celebrities followed. Henry Winkler named his daughter Zoe in 1980. Samuel L. Jackson did the same in 1982.

And then it just kept climbing.

At the time, Lisa Bonet had recently graduated from The Cosby Show to A Different World. She was a household name. So was her rocker husband, who would score a major hit with his debut album “Let Love Rule” in 1989. The young family were major celebrities in the era.

In 1991, Kravitz recorded the song “Flowers for Zoe,” which seems to coincide with another big jump in the name’s use.

A STEADY LINE OF ZOES

The name continued to be used for real-life girls and small-screen characters, too.

The West Wing gave the name to First Daughter Zoey Bartlet – played by a young Elisabeth Moss – in the early 2000s drama.

Zoe looks a little like Joe, so maybe it’s not surprising that the spelling Zoey caught on. Nickelodeon series Zoey 101 – starring Jamie Lynn Spears – debuted in 2005.

A few years later, Zoey surpassed Zoe as the most popular spelling.

Actor Zooey Deschanel puts one more option on the table. She was named for the Salinger character. But despite her professional success, from Elf to The New Girl, Zooey has yet to appear in the US Top 1000.

Today, actor Zoe Saldana is among the most famous bearers of the name.

Oh, and speaking of actors? Zoe Kravitz is all grown up, and playing roles from Big Little Lies to an upcoming Batman movie, where she’ll play Selina Kyle – aka Catwoman.

From the ancient world to nineteenth century France, from Sesame Street to The West Wing, there’s no shortage of stories for the baby name Zoe.

If you love your girl names short, sparky, and rich with meaning, the baby name Zoe might belong on your list.

Would you consider the baby name Zoe for a daughter? Which spelling do you prefer?