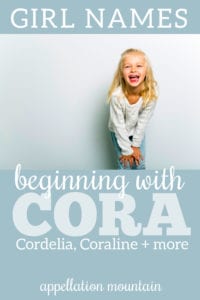 Cora names range from the short and sweet original to elaborate rarities, with plenty of choices in between.

Enough about why Cora has caught on. Let’s turn our attention to the just-slightly-different Cora names to consider.

Cora debuted in James Fenimore Cooper’s The Last of the Mohicans. Cooper probably based it on the Greek Kore, another name for Persephone, the goddess known for her annual retreat to the underworld, signaling winter, and triumphant return, ushering in spring. Today, many will think of the Countess of Grantham. True, the American-heiress-turned-aristocrat is a mother and grandmother. But she’s admirable, tough but loving. MTV gave the name to an adolescent werewolf on a recent incarnation of Teen Wolf, and a handful of other uses have kept this name on parents’ shortlists.

Coraline has some history as a given name tracing back centuries, but the name’s use in recent years is thanks to writer Neil Gaiman. His story Coraline was originally about a little girl named Caroline. He mistyped the name, and found that he preferred his error. The book was published in 2002; a movie adaptation followed in 2009. The name went from obscurity to the US Top 1000 following the movie’s release. Given our love of names like Adeline and Evangeline, Coraline fits.

Corinne fared well in the nineteenth and early twentieth centuries, and then made a modest comeback in the 1950s. Today it’s still heard in small but steady numbers. It shares the same Greek roots as Cora. There’s an ancient poet by the name, and it picks up even more literary sheen thanks to an 1807 novel authored by Madame de Staël. The latter tells of a romance between a Scottish lord and an Italian artist, and was wildly popular in its day. Tailored and feminine, Corinne feels at home with Alice and Harper alike.

In many cases, Kora simply stands as an alternate spelling of Cora. The Germans use a K, as in Karla and Katinka. But Kora takes this name in an imaginative and global direction. In West Africa, a kora is a 21-string harp. Add an ‘r’ and Korra is the hero of Nickelodeon’s The Legend of Korra, a sequel to Avatar: The Last Airbender. She’s tough and capable, and almost certainly explains a rise in girls named Korra in recent years.

Possible spellings for Kori and company abound, including 1980s boys’ favorites Corey and Cory. But it’s only Kori that ranks for girls currently. Some connect all of the Kori-Corey names to Old Norse, but chances are these names appeal more as modern innovations.

We love River and Kai, so why not the equally ocean-inspired Coral? Nemo’s mom in the Disney-Pixar classic answered to this name. Maybe the name’s similarity to Carol makes it seem slightly out-of-date; or maybe it’s simply yet to be re-discovered.

A pretty French spin on Coral, or possibly a form of Coralia, this rarity fits right in with Rosalie and so many other three-syllable, ends-with-y/ie names. Alice Hoffman chose it for her part-time mermaid in The Museum of Extraordinary Things.

There’s a minor saint by the name, dating back to fourth century Thrace. The name comes from the Greek word for coral, so it’s wrapped up with many of the other Cora names on this list. And yet, we’ve all but forgotten this one, even in an age when girls’ names ending with -lia are so in favor.  Corelia has been mentioned too, but I’m not sure if it’s another spelling for Coralia, or something else entirely.

Corazon boasts potential galore. It’s a word name, from the Spanish for heart, via the Latin cor. The name combines a tailored sound with that zippy Z. Maybe we still tie it to former president of the Philippines Corazon Aquino, the housewife-turned-politician following the assassination of her husband in the 1980s. That’s not a bad reference, though – history considers her a reform-minded and capable leader. For parents today, the name’s meaning might be a plus.

Lear’s loyal daughter has a lovely name, and one that is surprisingly seldom heard. With Juliet and Olivia in vogue, why not Cordelia?  Shakespeare based his character’s name on one used by Geoffrey of Monmouth, but updated the spelling from Cordeilla to Cordelia. Like many of Monmouth’s characters, she was more fiction than fact. But it remains an appealing literary choice, far rarer than you might expect.

A true rarity, Corella is a Cora nickname found in the Middle Ages. It could fit in nicely with so many -ella ending names, from Top Ten favorite Isabella to rising Antontella.

Coretta started out as an elaboration of Cora. Today it brings to mind Coretta Scott King, wife of Martin Luther King, Jr., and a civil rights leader who shared her husband’s work and continued it after his death. If we love Scarlett and Charlotte, is Coretta so different?

Way back around the sixth century BC, a poet answered to Corinna. (Though some place her work a few centuries later.) Appropriately, it’s poetry that has kept this name alive. Ovid used it circa 15 BC. And then Robert Herrick penned “Corinna’s going a-Maying” in the seventeenth century. And then Bob Dylan recorded a song in the 1960s by the name, and Corinna entered the US Top 1000 briefly, in the 1960s and 70s. Today it feels rare, but romantic and wearable.

From the ancient Greek city of Corinth, Corinthia might bring to mind St. Paul’s letters to the Corinthians from the New Testament. William Faulkner gave the name to a character in The Reivers, but she’s usually called Miss Corrie.

First recorded in a Spanish romance from the Middle Ages, Corisande probably comes from the Spanish word for heart – corazon, also on this list. A handful of uses in history, literature, and opera have kept the name in sparing use, but it is virtually unheard in the US.

It’s a little close to “care less” and yet, Corliss has plenty of appeal, too. It means joyful, and was originally a nickname given to a person seemingly without worries – free from cares. The name had a brief moment in the sun during the 1940s and 50s thanks to Meet Corliss Archer, a radio program about an upbeat teenage girl. It later became a comic book and a television series, too. Corliss could fit right in with names like Collins, Sutton, Harper, and Sloane today, but has yet to be re-discovered.

Famed Roman general Scipio came from the distinguished Cornelius family; that means his daughters both answered to Cornelia, Major and Minor. Cornelia Minor became especially well-known as a model of virtuous womanhood in the 200s BC – and an influential figure in her own right. It’s thought the family name comes from the Latin word cornu – horn, as in cornet.

Should you hear Courtney called out on a playground today, the name probably belongs to Ava or Mason’s mom. And yet, sounds make this one a cousin to all the Cora names, even if Courtney’s roots trace to a French place name.

What are your favorite Cora names? 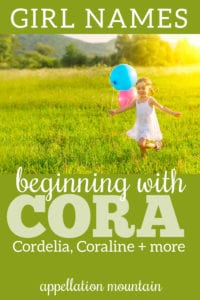 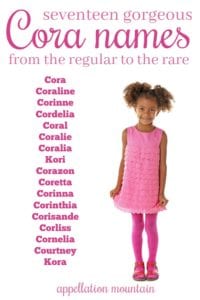