Every year, I dust off the ol’ crystal ball and try to imagine what the next twelve months have in store, baby name-wise.

And then twelve months later, I check in to see if I got it right.

Nameberry rolled out their 2015 Trend Report earlier this month.  Here’s my take on what the future holds.

From Neil Gaiman’s Coraline to Downton Abbey’s Countess of Grantham, fiction has given us plenty of Cora- names to consider.  And just like Lily names and Ellie names, it’s easy to imagine lots of Cor- and Cora- names catching on.  As of 2013:

The only Cor- names that haven’t fared well in recent years are Cory and Corey – two choices that seem way too tied to the 1980s to feel fresh today.

Of course, it possible that Cora names have already arrived, and maybe 2013 – the height of Downton Abbey obsession – marked the high water moment for the names.  It could be – especially since Coralie and Cordelia actually fared slightly better in 2012.  But I think that Cora and company still have lots of life left in them, and farther to climb. 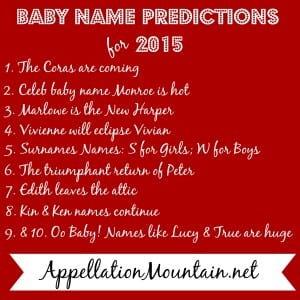 There are two things that can happen when a celebrity chooses a surprising baby name.

The first is lots of noise, but very little influence.

Mariah Carey and Nick Cannon welcomed twins in 2011.  File their son’s name – Moroccan, inspired by the room where Nick proposed – with Apple and Suri.

But their daughter’s name is another story.

Monroe arrived at exactly the right moment – parents were looking for fresh surname names for girls, something a little different than Madison, Addison, and Mackenzie.  And girls’ names ending in ‘o’ are also on the upswing.

Everly and Olive were widely influential, and Monroe seems to belong in their club.

Marlowe is catching on for the same reasons parents love Monroe.

Surname names continue to be stylish, but we’re always looking for something new.  Not so long ago, Harper was fresh and interesting.  Now that Harper has reached the US Top 20, boosted by everyone from the Beckhams to the Burtka-Harris family, we need something new.

Or is Marlowe the new Mackenzie?  There are at least three reasonable spellings:

Marlowe has all the makings of a fast-rising pick, and could follow Harper’s trajectory into the US Top 100.

Variant spellings can be controversial.

I prefer to think of dominant spellings – the spelling most common at any given point in time.  These change, for lots of reasons.  Kaitlyn replaced Caitlin.  Zoey eclipsed Zoe.  Zander is more popular than Xander.  Annabel was once most common, but today it’s Annabelle.

In recent years, I’ve been watching:

The lively Vivian, with roots in poetry and Arthurian legend, as well as ties to Latin and an early saint, has been on the upswing lately.  But which spelling will dominate?

Vivian is the most popular as of 2013.  But my guess is that the French Vivienne will surpass the -ian ending by 2015.

For girls, S is the letter to watch, with surname names Sutton, Sloane, and Sloan all climbing.  Sawyer is just outside the boys’ Top 100, but is also catching on for girls.  Spencer is falling for boys, but climbing slightly for girls.  And Scout – which feels more literary than surnamey – is definitely on the upswing.

For boys, surnames starting with the letter W seem to be having a moment.  There’s preppy hellraiser name extraordinaire, Wilder.  Walker keeps moving up.  All of the Wes- and West- names are in the middle of a good run.  Other stylish possibilities include Wells, Winslow, and maybe Walton, too.

Peter has been slipping since the 1950s.

Baby Name Predictions 2015: Girls Name Out of the Attic

Up until 2008, Edith was falling.  Edith was your grandmother, or maybe the sweet little old lady across the street.

But Edith just plain wasn’t a baby.  It was too fusty to consider.

That’s changed in the last few years.  Now all of Edith’s positive associations, from Edith Wharton to fictional characters in Despicable Me and Downton Abbey are boosting the name.  Short form Edie fits right in with Sadie and company.

Beginning in the 1990s, names including ‘ken’ and ‘kin’ were suddenly everywhere.  Mckenna and Mackenzie were huge, and gave rise to Kendall and Kennedy for both genders.

Conventional wisdom holds that trendy sounds don’t last, and there’s some truth to that.  But the sounds don’t rise and fall in the space of a year or two.  Instead, a sound can dominate for decades.  The long ‘a’ of Kaylee and Aiden has been wildly popular for three decades, from the 1980s Hayley and Caitlin to more recent successes like Grayson and Jayce.

Ken and kin are still going strong in names like:

Newer Ken and Kin names are joining them, and we’ll still be hearing the sound in 2015 in inventions like Kenzie and Kensley, as well as new discoveries like McKinley – as presidential as Kennedy, but relatively uncommon – until now.

Trends don’t exactly die.  They’re replaced as our tastes evolve.  And while the long ‘a’ sound remains in favor, I think it is rapidly giving way to the ‘oo’ sound.  Stylish up-and-comers like Luna and Jude could soon rival Ava and Mason.

In the US Top 100, there’s Julian, Lucas, and Luke for boys; Lucy and Ruby for girls.  The sound could help pull other names – think of June and Juniper for girls, Bruno for boys – into more mainstream use.

Speaking of that great oo sound, how ’bout True?

The presidential Truman is slipping, but reality television boosted Truely, and a few years ago, a short-lived Fox series gave us Tru as a girl’s name.

Because they’ve got the right vowel sound, and because American parents are all about virtue names, I do think we’ll hear more of True and company in 2015.  Keep an eye on:

Truett is a triple threat.  Not only is Truett a member of this fashionable cluster, Truett is also a stylish ends-in-et name.  And the recent passing of Chick-fil-A founder Truett Cathy means that plenty of people are familiar with the name, even if we’ve never heard met a Truett in real life. 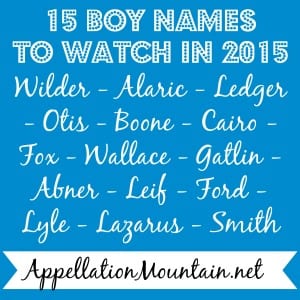 For boys, let’s keep an eye on: 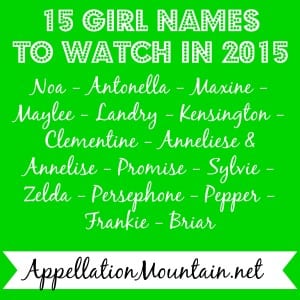 Since I chose fifteen names for boys, let’s find the same number of promising appellations for girls:

What do you think 2015 will hold for baby names?  Are there any names you think will rise next year?  What will the #1 names be for boys and girls?