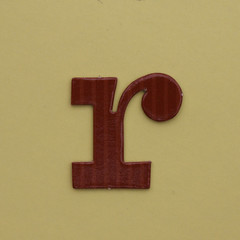 Devastated that Archer and Asher seem to be on everyone’s lists these days? Like the sound of Conor but can’t imagine your son sharing his name with Highlander? Ticked that Taylor has been borrowed by the girls? Here’s a list of fresh, ends-in-r alternatives that you might like instead. Only no guarantees that they won’t follow their style cousins up the charts!

Cedar – Free of Forrest’s preppy overtones and not as popular as River, Cedar is wild, but not too out there. Ideal for parents seeking a masculine nature name without going as far as Tiger.

Calder – Like Jackson, this one bridges the artistic/cowboy vibe. (Three Alexander Calders, grandfather, father and son, made sculptures, while Jackson Pollock flung paint.) He owes something to current favorite Carter, and a little bit to retro presidential pick Calvin, too.

Catcher – Remember the Ewan McGregor/Renee Zellweger rom-com Down With Love? McGregor played a caddish man-about-town called Catcher Block. He’s popped up on birth announcements a few times in recent years, a blend of sporting terminology and literary cachet, thanks to The Catcher in the Rye. Even though Salinger’s hero was, of course, named Holden. A similar option could be Booker, also a nineteenth century hero name thanks to Booker T. Washington.

Baxter, Chester – They’re antiques that might seem more appropriate for a pet than a person at first glance. But with Dexter white hot, why not these jazzy sound-alikes? Tom Hanks has a Chester, nicknamed Chet.

Grayer, Greyer – The privileged, poor little rich kid in 2002 bestseller was named Grayer. With Greyson and Grayson leaping up the popularity charts, this one seems poised to catch on, especially with rumors of a television adaptation coming soon. Bonus points: there’s little chance than Grayer will be confused with nouveau gender-ambiguous options like Graycen.

McGregor, MacGregor – He’s one of the few Mac- names that remains solidly masculine, thanks his association with Greg. A Scottish heritage choice, or possibly a

Roger – At home on the mid-century Mad Men set, but also rich with medieval associations. Nameberry called him one of the 12 Neglected Boys’ Classics. Another possible retro revival? Walter.

Slater – Chances are you grew up with Christian Slater, or maybe indie rockers Sleater–Kinney. Either way, this name sounds familiar. He’s softer than Slade, more masculine than Shea.

Thayer – The name that started it all, a less-common version of Taylor. I spotted it on a message board, the original post prompted by a character in ABC Family’s The Lying Game. Surname names aren’t for everyone, but if you love them, Thayer bears consideration, as does another starts-with-T choice: Thatcher.

Are there other ends-in-r choices for boys you would consider? What’s missing from this list?