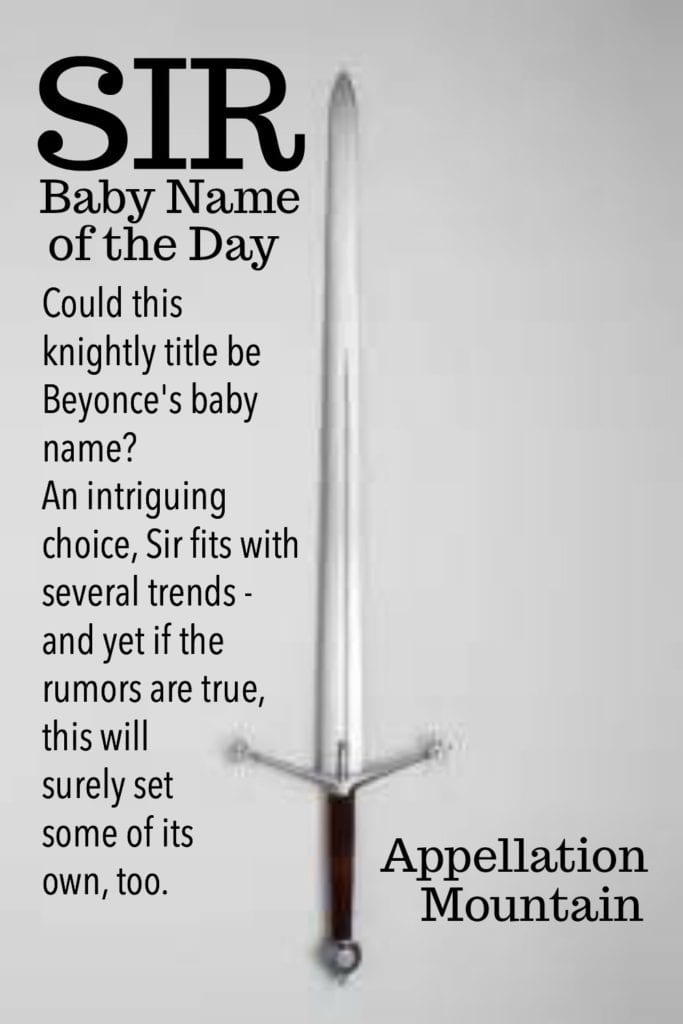 Sir doesn’t appear on any list of baby names, but that’s about to change.

Rumor has it that Beyonce and Jay Z have named their newborns Rumi and Sir, prompting our special Baby Name of the Day.

Looking for information on Rumi? Check out this post.

Back in the day, we addressed knights as Sire. As Latin evolved into new languages, the Latin roots of senior inspired many a new title, like the Italian signore and the Spanish señor. It might also refer to a father, and eventually came to mean “your majesty.”

Sir developed a little later. Today it serves as a general term of respect, while it remains a title bestowed on certain ranks.

We’ve written letters to this polite but generic title for centuries.

The image of a knight remains a powerful one, even though their armor and swords now live in museums, and the word can bring to mind Jedis as well as the Middle Ages.

It takes on the sheen of a modern virtue name when you consider the qualities associated with knighthood: honor, chivalry, bravery, honesty, and so on.

In 1967, Sidney Poitier played the title role in To Sir, with Love. Through a series of professional setbacks, Poitier’s character ends up teaching at a rough school in London. The teenagers are disruptive and disobedient. All ends happily, though – the reluctant teacher wins over his ragtag class, helping them find their gifts, and realizes he’s found his calling in the school.

Singer Lulu appeared in the movie, and scored a smash hit with the title track.

Sidney Poitier had already won an Oscar, for 1964’s Lilies of the Field. In an era when few African-Americans were represented in Hollywood, he became a major star and box office draw. His movies often took on issues of race relations, in the heat of the 1960s Civil Rights movement.

Poitier, incidentally, can claim the title Sir. Queen Elizabeth II knighted him in 1974.

Sir: By the Numbers

Here’s a twist: while this name appears brand new, boys have receive the name for ages.

50 boys were named Sir in 2016; the numbers have grown steadily over the last few decades.

First, it could simply be more of the trend for big, bold baby names. Messiah and King and Duke and Saint make Sir seem relatively understated.

Or perhaps the name picks up on another custom. I’ve read that African American parents sometimes gave their children titles as names, from the humble Mister to the loftier General. Why? Because, by custom, white adults were addressed as Mr. LastName or Mrs. LastName. But adults of color would forever be FirstName, regardless of age. There’s a memorable scene near the end of Hidden Figures, when Dorothy is finally promoted – and addressed as Mrs. Vaughan.

This puts Sir firmly in a cultural tradition, as well as current trends. And yet, it’s quite humble. Jay Z and Beyonce may be considered royalty, but they didn’t name their son Prince.

Chicago native William Stokes performs as hip hop artist Sir the Baptist. Stokes earned the nickname as part of the church choir, where his dad served as pastor. While he’s yet to release his first album, Stokes has already generated tons of buzz for his early work, like “Raise Hell.”

Back in October 2016, he even opened for Beyonce. That’s about nine months before the twins’ birth, if you’re counting.

One more factor makes Sir an intriguing possibility: the sound.

Celebrities have embraced names like Bear – short, distinctive word names. It’s no coincidence that both end with -r. From Asher to Carter to Valor, it feels fresher than more traditional names, and is slowly eclipsing all of those ends-in-n names for boys.

That puts this name in the middle of two trends: our affection for brisk, modern, short boy names and all of those -r enders.

Sir: The Next Trend?

Some celebrity baby names catch on in a big way. I’m looking at you, Maddox and Knox. Others never quite catch on. Hello, Apple and Suri.

So even if this rumor proves true, there’s no guarantee that we’ll meet dozens of new boys with the same name. But Sir fits nicely with current trends.

What do you think – crazy celebrity baby name or trendsetting pick?