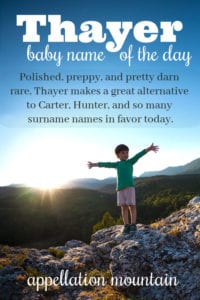 Thayer comes from the same family tree as former favorite Taylor. And yet it remains quite rare in the US – for now.

Thanks to Arianna for suggesting our Baby Name of the Day.

In Latin, taliare means to cut, and a taliator was the one who did the cutting.

Whisper it down the alley, thread it through French and carry it into English with the Normans, and it becomes Taylor and Thayer, too.

Once upon a time, it served as a surname for those who made clothing. And while the profession still exists, it’s generally spelled tailor. The most common form of the surname – and it’s among the most familiar in the English-speaking world – is nearly always spelled with a ‘y’ – Taylor.

We’re meeting plenty of children with names like Davis and Walker, Madison and Avery. So surnames make up a big part of the twenty-first century baby name pool.

But it’s not every surname, and it’s not necessarily the most common ones that rise to the top. When’s the last time you met a baby called Smith or Jones?

Thayer fits into this scene neatly. It’s not terribly common, but we all recognize the name.

It sounds like a twenty-first century boy name, too. Consider:

Maybe what this name lacks is a pop culture icon to cement it in our imaginations. After all, Taylor boasts female Swift and Lautner, along with earlier bearers from Planet of the Apes’ astronaut George Taylor – it was his last name, but he used it like a first – to 1980s dance-pop sensation Taylor Dayne.

There have been just a few that might come to mind:

You might also think of Thayer Academy, a Boston-area prep school named for its founder, General Sylvanus Thayer. He’s better known for another school he helped establish: the United States Military Academy at West Point.

California gives us Mount Thayer, in the Santa Cruz Mountains near San Francisco, and a few other places dot the map.

Thayer: By the Numbers

Like any surname, it’s been in sparing use over the years. As of 2017, 46 boys received the name, along with six girls.

That’s a drop in the bucket compared to Taylor.

But while Taylor sounds like a 90s name, Thayer sounds fresh and just slightly unexpected. It’s polished and upper-crust, probably thanks to some of those famous – and fictional – bearers. But in our age of preppy hellraiser names, like Wilder and Hayes, that’s not a deal-breaker.

If you’re after a fits-in/stands-out name for a son, and surnames are your thing? This one belongs on your list.

Would you consider Thayer for a son?