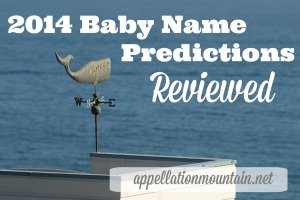 With just one month left in 2014, it seems like the perfect moment to look back at my baby name predictions for the year.

The only trouble?  It’s challenging to draw any kind of conclusions when data for 2014 when US data won’t be available until May 2015.  Sure, we’ll see lots of unofficial tallies and best-ofs, but they’re based on website user data.  Numbers from Nameberry or Baby Center can be bellwethers – but they’re just not the same as seeing the real deal from the Social Security Administration every spring.

Despite this deficit, how can I let December sail past without a look back?

I’ll take another look back mid-year, when the official data is available.  But for now, how did I do calling the best baby names of 2014?  (And if you’re super curious, here’s the review of baby name predictions from 2013, too!)

The new Maddie is … Lily

Last year, I confidently declared that Lily was everywhere, with an abundance of formal name options, from Lillian to Lillyana.  Instead, it looks like Lily had already peaked.  In 2013, Lily, Lillian, Liliana, Lilly, Lilian, Lillie, Lilyana, Lilianna, Lilith and Lilia all fell.  Only Lilliana and Lillianna bucked the trend.  Overall, this was an excellent prediction.  For 2011.

Winnie Fallon was my favorite celebrity birth announcement of 2013, a spunky choice in the key of Sadie.  105 girls were given the name in 2013, the most since 1952.  And yet, that’s not quite enough of a jump to declare this a hit.  Let’s keep watching.

Last year, I wrote Remember when Carter felt like a fresh, preppy possibility? Now he’s mainstream, but Ames and Keats have picked up the Brooks Brothers rep tie.

Variant spelling most likely to eclipse original … Jaxon over Jackson

Last year, I wrote: Variant spellings can be controversial … I prefer to think of dominant spellings – the spelling that is most popular at any given moment. In 2009, my prediction was Zoey over Zoe. That’s come to pass. Now I’m watching Sofia over Sophia, and as of this year, Jaxon instead of Jackson. And maybe Jaxson, too.

As of the 2012 data, Jackson ranked #22, a comfortable margin ahead of Jaxon, #66. But add in Jaxson, at #106, and the variant spellings catch up to the surname original.

Names Most Likely to Take the Top Spot … Mason and Liam

I’ve been calling the fall of Jacob for a few years, and let’s face it – eventually I was going to get it right.  Not rocket science.  But I totally didn’t see Noah coming!  My money was on Mason or Liam.  And – truthfully – I have hard time seeing Noah remaining on top for 2013.  So I’m still thinking either Mason or Liam might claim the crown in 2014 – but we’ll have to wait for May.

The new Atticus is … Huckleberry

Remember when Atticus was that quirky boy name that seemed to be everywhere, while grandparents shook their heads.  Now Atticus ranks #404, up from #410, and I’d bet that some edgier neighborhoods will have more than one Atticus in their kindergartens in few years.

I’m betting that Huckleberry is the new Atticus.  Except it is very hard to measure a name on the fringes until it actually starts to go mainstream.  Huckleberry was basically unknown ten years ago.  In 2008, 21 boys were named Huckleberry.  In 2013, that number was 14.  So it seems like a miss … except I’m hearing Huck as a nickname for Henry, and Huxley has climbed in recent years.  So I feel like the Huck-cluster still might follow the Finn-cluster … just not quite yet.

In my original 2014 baby name predictions post, I wrote:

Nearly any pontiff inspires baby names for the faithful, but Francis is different. He’s Time Magazine’s Person of the Year for 2013, and his message – of mercy, of healing, of non-judgment – is starkly different than his predecessors. There’s never been a Pope Francis before, and his name honors a saint known for his ministry to the poor.

But Nelson?  He made the list following the passing of activist-turned-President of South Africa Nelson Mandela, a towering figure – but one who hasn’t inspired parents to name their children in his honor.

Everly made the list thanks to Channing Tatum and Jenna Dewar’s daughter.  In the original post, I noted that the Dewar Tatum family wasn’t the first to use the name, but:

… Channing and wife Jenna Dewan welcomed their daughter just as Everly was ready to catch on. The name entered the US Top 1000 at #907 in 2012, and she strikes the right note – a three-syllable ends-in-y name, a longer name for Evie, a surname name that we haven’t heard everywhere. She’s less lacy than Evangeline, less expected than Evelyn, more elaborate than the spare Eve.

Plus, Channing has had a great run – he’s been a big screen action hero, People Magazine’s Sexiest Man Alive in of 2012, and has taken a crack at producing. Add it up, and Everly is poised to leap up the popularity charts in 2014.

Borrowed from the Big Screen … The Influence of Arrows

Credit the dystopian YA novels turned blockbuster film series.  Hunger Games names are an interesting bunch, and we’ve definitely heard more of Primrose, plus the odd Katniss, Finnick, and Rue.

But the real story is the influence of archery and arrows:

Individually, it’s tough to call any single name a hit, but tally them up, and there’s definitely a trendlet.

Names most likely to enter US Top 1000 … Elodie, Gray/Grey, Wren

Here’s what I wrote last year:

And here are the names and how they fared:

Now, for the girls:

Some of my predications are always a little softer and more difficult to grade. But I think these remain generally accurate.

Last year, I wrote: We’re less daring with boys’ names, as a general rule. That’s starting to change, but parents aren’t sure exactly how to change. So we’re heading in both directions at the same time … It’s a split, but if we’re lucky – and I think we might be – it means that we’re finally free to choose daring names for boys, whether your taste runs towards Percival or Gilbert or Arrow or Stone.

With names like Sebastian and Josiah in the Top 100, our fear of ‘soft’ names for boys is surely over.  But Ryker, Maverick, Jax, and King are on the rise, so there’s more than one trend at work.  Though I’m not sure those names are thuggish – maybe they’re 21st century cowboy names.

-et girls are the It Girls … and Boys

As I noted in 2013, there have always been a few ends with -et girls in the US Top 1000.  But they feel more appealing than ever, with names like Scarlett and Violet in the Top 100, as well as stylish boy choices like Emmett, Bennett, Everett, Beckett, Jett, and Elliott/Elliot.

We can definitely expect to keep hearing -et names for girls and boys in the upcoming years.

Overall, I’m pretty happy with my Baby Name Predictions for 2014.  What do you think?  Are any of these trends fading?  Any you especially like or dislike?