We’ve been talking Celebrity Baby Names 2014 all week.  Now it’s time to bring it all together, with a look back at the last twelve months.

In years past, I’ve done round-ups of my favorites and best-ofs.  (You can read 2013’s post here.) This year, let’s try something a little different.

I’ve chosen fourteen – oops, make that fifteen! – of the most notable names high profile parents gave to their new arrivals, the ones most deserving of recognition.  Sometimes the names are noteworthy for their tremendous style.  Other names … it’s a little harder to say what makes them so very interesting.

What we do know is that a high profile birth announcement can really boost a name.  Think of the Jolie-Pitt family, with their trend-setting x ending boy names.  Or Everly, the latest overnight sensation, given a mighty boost by leading man Channing Tatum when he and Jenna Dewar chose the name for their daughter.

Let’s take a look at the most exciting Celebrity Baby Names 2014! 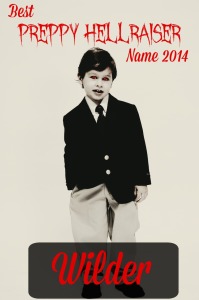 Is Wilder a literary name at home in a blue blazer?  Or is he, well, wild?

For a name that’s the best of both worlds, the 2014 Best Preppy Hellraiser Name award goes to Wilder, son of The Big Bang Theory’s Simon Helberg and wife Jocelyn Towne.  The couple are also parents to Adeline.

No word on why the parents chose Wilder, but it’s a name on trend: a W surname name for boys, and an ends-in-r choice, too.  The name is presently just outside of the US Top 1000 – but I suspect that will change in the next year or two. 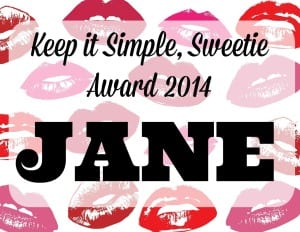 Let’s hear it for late night talk!  Last year, Jimmy Fallon wowed us with Winnie, and this year, Jimmy Kimmel kept it simple with Jane.

Yes, Jane.  A little bit Austen, a little bit retro.  She’s had her ups and downs, but how can Jane be called anything other than classic?

In a world of elaborate appellations like Isabella and Esmeralda, there’s something to be said for slim, trim names for girls – a category in which Jane reigns as queen. 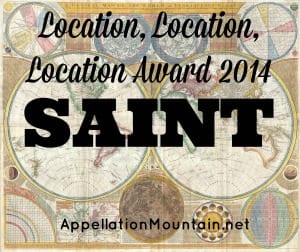 Remember when Selma Blair named her son Arthur Saint?  Now Dave Grohl has named his youngest daughter Ophelia Saint.  It’s a complicated name, interesting and even swoon-worthy in the middle spot – especially when combined with a romantic like Ophelia.  But promote Saint to the first place, like Pete Wentz and Meagan Camper’s son Saint Laszlo?  I think it’s too much.

The same name that feels sparky and daring in the middle spot can seem unwieldy, even outlandish as a given name.  Yes to Sweetheart and Saint and Swan and even Danger and Bunny in the middle.  But as first names?  Maybe not. 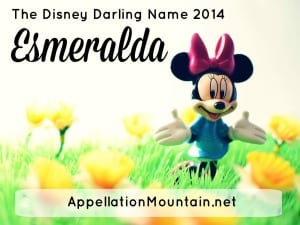 Sure, Hayden Christensen and Rachel Bilson named their daughter Briar Rose, a nature name straight out of Sleeping Beauty.  But Ryan Gosling and Eva Mendes made the much bigger splash with daughter Esmeralda’s name.

The couple kept her name mum for weeks, sharing only her nickname – Preciosa – in the press.  But Eva has recently revealed that she and Ryan chose Esmeralda after the Victor Hugo heroine.  In the novel, Esmeralda ends tragically.  But the Disney version gives us a much more appealing tale, complete with singing gargoyles and a happily-ever-after.

Esmeralda is not officially a Disney princess – it’s an exclusive club – but she could be the biggest Disney baby name since Ariel. 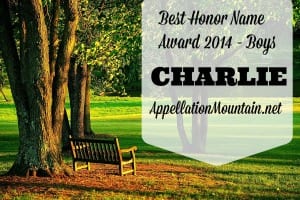 Don’t you love a great family name?  The only thing better than finding a great name on your family tree is finding inspiration from a loved one, inspiration that inspires a truly meaningful choice.

David Arquette has a history of doing just this.  He and ex-wife Courteney Cox named their daughter Coco, after mom’s nickname.  In 2014, David and Christina McLarty welcomed a son, Charlie West.

Charlie was inspired by David’s grandfather, Cliff Arquette.  The elder Arquette rose to fame as Charley Weaver, his comic alter-ego.  In the 1970s, he even appeared on Hollywood Squares in character.  One more connection: Cliff’s dad was born Charles Augustus Arquette, and Cliff’s full name was Clifford Charles.  A family name extraordinaire, and definitely one of the Celebrity Baby Names 2014 worthy of recognition! 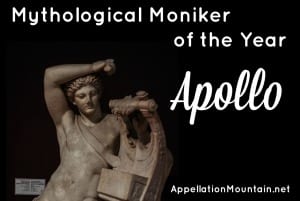 Mythological Moniker of the Year: Apollo

With boys called Kingston and Zuma, we knew Gwen Stefani and Gavin Rossdale wouldn’t play it safe when it came to naming baby #3.

The couple didn’t disappoint: Apollo Bowie Flynn arrived in February.  His name seems sure to be trend-setting.  Apollo was already on the rise in 2013, up to #967.  With his lyre and his laurel wreath, the Greek god was musical and athletic, a sun god associated with light, healing, and truth.

It’s a powerful pick for the high-profile couple, and odds are others will follow their lead. 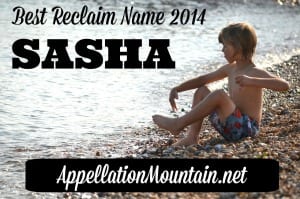 Parents sometimes worry that boys with girlish names will face problems on the playground.

But if your dad is Thor?  Maybe not so much.

Sasha is a originally Russian nickname for Aleksandr, and also Aleksandra – so no surprise it ranks in the girls’ Top 500 in the US.  Let’s hope that the arrival of the newest handsome Hemsworth will help push more parents to consider Sasha for their sons.

Honorable mention goes to Larkin Zouey, son of actors Mireille Enos and Alan Ruck.  Big sister is Vesper Vivienne.  Larkin is originally a diminutive form of Laurence, but is more popular for girls in recent decades. 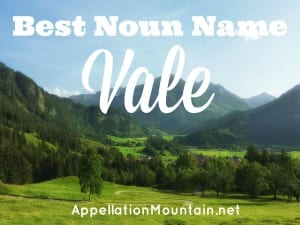 Today’s Savannah Guthrie got it exactly right when she and husband Michael Feldman chose the poetic, nature name Vale for her daughter earlier this year.

Savannah’s own name was wildly unusual back in the day – Ms. Guthrie was born in 1971, but Savannah failed to crack the US Top 1000 for given names until 1983.  Since then, it’s gone mainstream, charting in the US Top 100 every year since 1993.  Could Vale follow the same course?

Vale is an archaic word for valley, now found mostly in poetry.  But it matches well with mom’s name – the letter V, the place name and nature name associations.  The reaction to this unusual name choice was overwhelmingly positive, so here’s guessing that we’ll be meeting more Vales in the coming years.  In fact, just weeks after the first birth announcement, professional golfer Graeme McDowell and wife Kristin welcomed daughter Vale Esme. 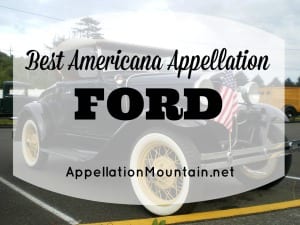 Move over, Levi!  The blue jean baby name once conjured up everything from the California Gold Rush to James Dean – as American as apple pie, even though his roots are pure Old Testament patriarch.

Now the newest red, white, and blue baby name has got to be Ford.  Chosen by Owen Wilson for his son with Jade Duell in 2011, Ford brings to mind the Motor City, and inventor-industrialist Henry Ford. 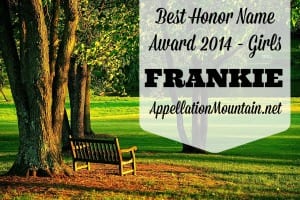 Drew Barrymore and Will Kopelman got high marks for their first daughter’s name: Olive, born in 2012.  So we were all waiting eagerly to learn what daughter #2 would be called.

Drew and Will didn’t disappoint.  Their daughter answers to Frankie, a sassy, retro name in the key of Sadie, as well as Winnie, a celebrity baby name favorite from 2013.

What makes this name even better?  Drew explained that it honors Will’s mom.  Her maiden name?  Franco.

With all of the Francis names on the rise for many reasons, do you think we’ll hear more of Frankie? 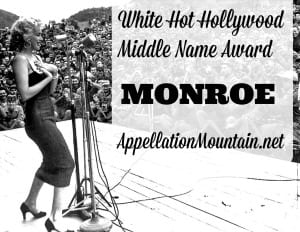 Quick, what do Tila Tequila – a reality star and racy model – and Rosie Pope – a proper, English maternity concierge to those of considerable means – have in common?

Their daughters, both born in 2014, share a middle: Monroe.  Bridget Monroe for Rosie, Isabella Monroe for Tila.

Ever since Mariah Carey – a huge fan of the Hollywood icon – named her daughter Monroe in 2011, the name has been on the rise.

In Rosie’s case, the middle name probably doesn’t refer to Marilyn.  She’s mentioned that her older kids all have middles drawn from places she and her husband have lived.

Tila almost certainly was channeling the silver screen star when she chose her daughter’s middle.  Tila had a tumultuous romance with the late Casey Johnson, and Johnson was widely known as an admirer of Marilyn. 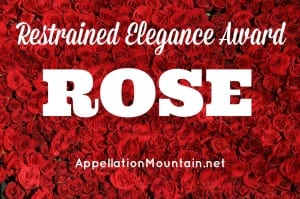 For years, Rose was always a bridesmaid, a favorite in the middle spot.  But only rarely did we meet a Rose, even after Kate Winslet’s lovely, courageous character in Titanic.

Then came the stylish Scarlett Johansson.  Her first name inspired parents to consider the colorful Scarlett for their girls.  And now Scarlett and husband Romain Dauriac are new parents to daughter Rose Dorothy.

It’s an elegant name, and a clever nod to both mom’s name – Scarlett and Rose are both colors – and dad’s name – both Rose and Romain share the first syllable.

As for that retro, storybook middle, Dorothy honors Scarlett’s grandmother.  But it also makes for an unexpected cadence – short first, long middle – that has quite a bit of style. 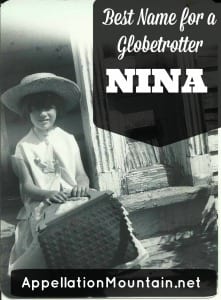 Nina has roots in at least a dozen languages, and works in many more.  Short, sweet, and complete – and yet this name is surprisingly long on style, too.

The combination chosen by musician Isaac Hanson and wife Natalie is a really appealing one: Nina Odette.

It brings to mind a little bit of everything: the cool jazz of Nina Simone, the grace of Swan Lake.  And the name seems poised to cover the globe, whether the language spoken is Spanish or Russian or Arabic. 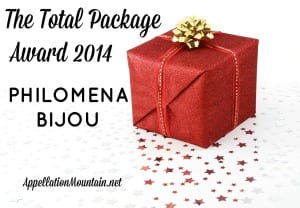 Sometimes a first name is just great, but the middle is … less exciting.  And sometimes a sparky middle boosts a relatively unexciting first.

And then sometimes the combination is exactly right – the total package.

Philomena, an underused Greek name, could mean loved – or maybe “friend of strength” – both great options.  Bijou is a French word for bauble, and one of those names that has just enough history to lend it vintage status.  The sound is elaborate and dramatic, but still just short of fictional.

The parents refer to their girl as Philo, but nicknames abound – Mena, Minnie, Pippa, maybe even Polly or Lola. 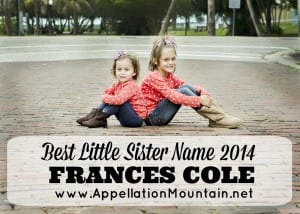 Up until a few days ago, I’d managed to narrow this list to fourteen superlatives.  But then, wouldn’t you know it? Jimmy Fallon and Nancy Juvonen – the parents of Winnie Rose, one of my favorite 2013 celebrity baby names – welcomed daughter #2.

Daughter Frances Cole – they’re calling her Franny! – fits perfectly with Winnie.  The couple shared that Winnie’s name was inspired by a lake where they vacation, and where Jimmy proposed.

No word yet on the inspiration behind Franny’s name, but it has the same sassy, retro style.  And that makes not one, but two, Francis-inspired names on this list!  The Frans are going places.

What were your favorite celebrity baby names 2014?