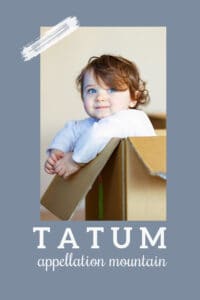 The baby name Tatum took off in the 1970s, thanks to a high-profile birth announcement and the youngest-ever Oscar winner.

Thanks to Abbie for suggesting our Baby Name of the Day.

The baby name Tatum started out as a surname.

Also spelled Tatham, it comes from an Old English given name – Tata – plus the common ending -ham, meaning homestead.

Tata is shrouded in uncertainty. It also led to the surname Tate, but that offers no clues as to the name’s meaning.

It might relate to the Old Norse Teitr or Teit, which means cheerful. Meanings like “bringer of joy” are sometimes  associated with the baby name Tatum.

Old Norse and Old English mixed and mingled, especially from the 800s to the 1000s when Viking raiders became settlers. Bleak and blunder, cake and creek, glitter to gust all come from Old Norse during this period, so it tracks.

Ethelburga of Kent, wife of King Edwin of Northumbria, answered to the nickname Tate, presumably because she was cheerful. Their sixth century marriage helped convert northern England to Christianity, and she’s considered a saint.

It makes for more history than you might expect from such a modern name.

Despite Tatum’s surname status, this was virtually unused as a given name until the year 1973.

Credit for the name’s rise is down to one factor: a celebrity kid. But not just any celebrity kid – she quickly became a star in her own right.

Born in 1963, Tatum Beatrice O’Neal was the daughter of actors Ryan O’Neal and Joanna Moore. Her dad had not quite hit it big when she was born. But a year later, he joined the cast of smash hit drama Peyton Place and became a household name. Movie roles followed, like 1970’s Love Story.

That’s the year O’Neal and his young daughter co-starred in the Depression-era dramedy Paper Moon. The movie earned Miss O’Neal an Academy Award for her performance, making the 10 year old the youngest Oscar winner ever.

Tatum O’Neal stayed in the headlines, as much for her personal life as her professional one. She dated Michael Jackson, and later married tennis champ John McEnroe.

For years, many assumed that Tatum’s unusual name must come from the O’Neal family tree. Not so. While Ryan is of Irish and English descent – as well as Ashkenazi Jewish on his mother’s side – the name claims a different source.

Miss O’Neal explained that she was named for jazz pianist Art Tatum.

Born in 1909, the musician is considered one of the greatest jazz pianists of his generation. He died in 1956, but his recordings remained widely available, so the timing makes sense.

Speaking of timing, let’s take a look at the numbers.

In 1966, the girl’s name Tatum debuted in the US Social Security data. Five girls received the name.

But it took Paper Moon to make a real impact.

Through the 1980s and 90s, the name chugged along, kept in the spotlight by the actress, but not rising dramatically in use – and never cracking the Top 1000.

Actress Tatum O’Neal had faded from the spotlight by the time Scream hit theaters. But during the late 1990s, of course, names like Taylor and Madison were all the rage. Tatum fit right in.

In 2006, model Channing Tatum starred in dance movie Step Up, and launched a major movie career. That year, 947 girls and 108 boys received the name; a year later, those numbers stood at 990 girls and 147 boys.

The handsome actor has helped push this surname back towards Team Blue.

And in 2021? Those numbers reached 1125 girls and 834 boys. It’s almost as common to meet a boy Tatum as it is to meet a girl Tatum, making this an increasingly gender-neutral name.

In terms of rank, that translates to #385 for boys, about as common as Marshall or Clark. And for girls, it ranks #279, around the same as Annabelle or Trinity.

One more boost for Tatum for baby boys comes from basketball. The Boston Celtics’ Jayson Tatum is a three-time NBA All-Star and helped take his team to the NBA Finals in 2022.

There’s an uptick in the name’s use for boys and girls alike in recent years that might correspond to the athlete’s career. After all, Jordan rose for similar reasons in an earlier generation.

Fresh and modern, but with just enough history, the baby name Tatum has long been a familiar, but not too common choice.

That remains true today. Nothing looks quite like Tatum. And while there are just enough famous people to make the name familiar – besides actress Tatum O’Neal and actor Channing Tatum, there’s a former Miss South Africa named Tatum Keshwar, as well as author and educator Beverly Tatum.

It’s become quietly familiar, as a first name and a last. And lately, it’s been increasing in frequency.

Still, the baby name Tatum remains relatively uncommon. It reads like a cool, modern unisex choice, without feeling invented or forced. Tate is trimmer, and Rowan is more tied to the natural world.

But there are plenty of good reasons to consider this rising favorite, for a daughter or a son. With an upbeat sound and meaning, Tatum could wear well.

What do you think of the baby name Tatum? Do you like it better for a boy or a girl? 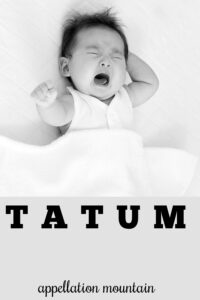 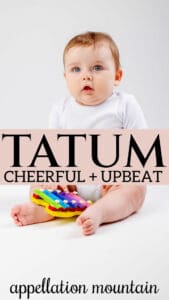