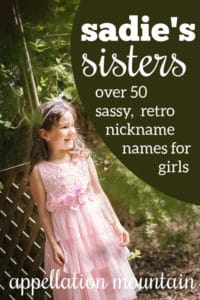 I’m a nickname fanatic, and old fashioned nickname names for girls are some of the best.

I prefer putting a big mouthful of a formal name on my child’s birth certificate, then adopting a short form for everyday use.  If I had a Sadie, she’d be Sarah.

But that’s me. There are plenty of good reasons to skip the formal name and go right to the nickname, and plenty of parents who prefer it.

In fact, these old fashioned nickname names for girls have risen in use over the last decade.

So for your consideration, I’ve pulled together a list of old fashioned nickname names for girls that stand on their own.

If old fashioned nickname names for girls like Sadie and her sisters are your style, read on …

Borrowed from the Boys

Bobbie – Once a fresh favorite for girls, Bobbie isn’t miles away from Abby.

Billie – Willa and Willow seem more fashionable, but Billie offers a retro cool that makes it wearable – and rare.

Charlie –  Remember those 1970s commercials for the fragrance Charlie? It sparked the idea of Charlie as a girl’s name, one that’s accelerated in our era, making this a true unisex pick.

Frankie – Amanda Peet used it for a girl; so did Drew Barrymore. A former Top 1000 staple, lately Frankie is rising in use again.

Freddie – Frederick and Frederica are underused classics, worthy of a comeback. Should that happen, Freddie might be the next Charlie.

Johnnie – Musician Melissa Ethridge named daughter Johnnie Rose after her father, John. Sure, there’s Jane and Joanna, but maybe Johnnie is worth considering to honor a John, too.

Maxie – I might never have put Maxie on this list – it seems too ready-made for teasing. Except isn’t Maxie kind of swingy and cool?

Carrie – From Theodore Dreiser to Stephen King, fictional Carries are plentiful. So are real-life ones, like country star Carrie Underwood and the late, great Carrie Fisher.

Ellie – Ellie might serve as a short form of many a name, but today it’s wildly popular on its own.

Elsie – Reality star-turned-designer Lauren Conrad embraced this as a nickname through her initials – L.C. – but Elise works, too. Zooey Deschanel chose it for daughter Elsie Otter in 2015.

Hallie – Once a nickname for Harriet, today Hallie bridges those old-school names and favorites like Hailey.

Maggie – Many a Maggie is a Margaret, including Dame Maggie Smith. But the English actor makes the case for using just Maggie, as many parents have already done.

Rosie – Another name in the key of Janie and Gracie, Rosie feels casual and cozy.

Birdie – Busy Phillips bestowed this avian appellation on her daughter in 2008; Jessica Simpson did the same in 2019. While there are more subtle ways to evoke the finely feathered, Birdie feels more wearable than ever before.

Edie – Keira Knightley gave the name to her daughter, a sweet nickname name with style to spare.

Hattie – You might put Harriet or Henrietta on the birth certificate, but Hattie is far more popular than either.

Josie – We love Josephine, and this is the go-to short form.

Maisie – Once short for Margaret, Maisie now feels like a stand-alone choice.  I’m a big fan of the Maisie Dobbs series of mystery novels, set in twentieth century England between the wars.

Posie – Rumored to be the baby name of Kylie Jenner, this sweet botanical name has a lot of vintage style.

Sylvie – The French form of Sylvia is an Appellation Mountain reader favorite.

Bessie – There’s something about Bessie that screams antique. And yet, Tess names are having a good moment, so maybe it’s time for Bess + company, too?

Bonnie – The little girl who inherited all of Andy’s beloved friends in the Toy Story series might encourage parents to consider this pretty name.

Dottie – If Dorothy is on the comeback trail, will some of her retro nicknames revive, too?  Dolly is another possibility, but Dottie seems like Sadie’s sister.

Dovie – It appeared in the US Top 1000 a century ago. If Birdie works, maybe Dovie does, too.

Florrie, Flossie – The Italian city of Florence has a long history as a given name, and these throwback diminutives fit right in with Sadie and company.

Lottie – Top Ten Charlotte can shorten to this sweet name.

Nellie – An older generation thinks of Little House on the Prairie’s mean girl extraordinaire, Nellie Olsen. But Nellie can be short for lots of gorgeous names, and might work independently, too. Nella is another option in the Ella-Stella-Bella line.

Sallie – Often spelled Sally, the -ie ending has just as much history. I was sure Kieran Shipka’s Mad Men would boost the name, but it didn’t happen.

Susie – Also spelled Suzy and lots of other ways, Susie takes midcentury Susan and makes it even more throwback.

Tessie – If you’re a huge Boston Red Sox fan, then you know the Dropkick Murphys “Tessie.” It’s the latest version of a 1902 song, long associated with the baseball team.

Tillie – Sometimes short for stylish Matilda, Tillie sounds awfully sweet. But if Molly and Millie work, Tillie can, too.

Trudie – If Sadie and other old fashioned nickname names for girls are back, why not Trudie? It’s spunky, retro and strong.

Arlie – Arline started out as a well-born child kidnapped by gypsies in a nineteenth century opera, but today Arlene sounds like a granny name. Arlie might be an Arlene nickname, or have origins of its own. Either way, it feels like a more modern spin on the once popular sound.

Dessie – In Ireland, Dessie might be a nickname for Desmond – and thus, exclusively masculine. In the US, it sounds more like a – very wearable – riff on Bessie.

Dixie – Too Southern, maybe? Dixie leans a little bit cutesy, but that middle ‘x’ can be quite stylish.

Dulcie – This name is sweet – literally, from the Latin dulcis. Longer form Dulcinea conjures up Toad the Wet Sprocket and Don Quixote – though the literary Dulcinea was actually named Aldonza.

Effie – The Hunger Games raised the profile of this name, traditionally short for Euphemia. Since Effie Trinket only leads our girl Katniss into danger, maybe parents are inclined to overlook it. In the UK, it’s connected to a traditional Scottish name, and much more common.

Hettie – Another possibility for Henrietta, as well as Hester or Hestia.

Icie – A name that once charted in the US Top 1000, a century or so ago.  Perfect for our Frozen era?

Lettie – Formal name options include the salad-esque Lettice, or the lacy Letitia. If Victorian valentine isn’t your style, Lettie might appeal.

Lindie – Lucky Lindy was aviator Charles Lindbergh’s nickname. Swing-era dance craze the Lindy Hop was named in his honor. Linda is a Baby Boomer, and elaborations like Melinda and Belinda don’t feel especially current, either. But Lindie might work as a nickname for nature name Linden, the elegant Rosalind – or on its own.

Mamie – Associated with classics like Mary and Margaret, as well as former First Lady Mamie Eisenhower – and yes, it was her birth name.  If Maisie is an option, maybe Mamie is, too? Meryl Streep’s daughter Mary Willa Gummer is known as Mamie, and she’s forging her own career as an actor, which might boost the name’s profile.

Zadie – If Sadie works, why not her zippy cousin? The z-to-s switch has worked out just fine for novelist Zadie Smith.

Zelie – There have definitely been women named Zelie. And while the exact origins are debated, the recent canonization of Saint Zelie Martin might raise the profile of this stylish name.

Would you consider a short, ends-in-ie name for a daughter? And if so, would you put it on her birth certificate or opt for a more formal version?  Which are your favorites?  Are there others that should be on this list? 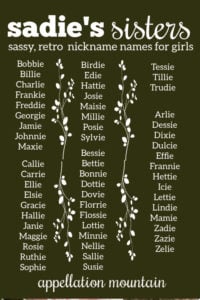 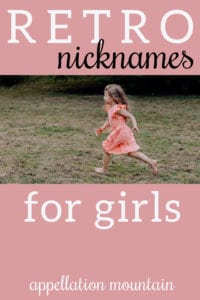