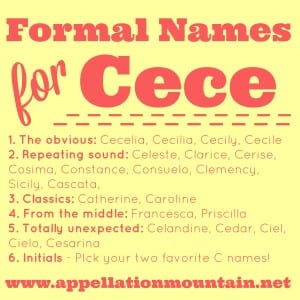 Then you’ve come across this short form in one spelling or another.

But which formal names logically lead to Cece – or CeCe or Ceci or Cici or C.C.?

Turns out that the possibilities are plentiful, from the predictable Cecilia and company, to some names you’ve probably never considered.

Read on for some interesting options – and please share your favorites in the comments!

Getting to Cece: Cecilia & Company

Cecelia, Cecilia – The most logical way to get to Cece.  The Office’s Jim and Pam named their daughter Cecilia.  It’s the real name of Miss Peniston, too, and on an even more famous musical note, the title of Simon and Garfunkel’s smash hit song.  The name has ranked steadily in the 200s and 300s for decades, and with her -ia ending, seems nicely on trend.  A note on use: Cecilia is currently much more popular, but Cecelia is gaining fast, possibly because parents prefer the Cece spelling for the nickname.

Cecily, Cecilie – Cecily is to Cecilia as Margery is to Margaret – a form favored in medieval England, and now considered a different name.  Cecilie looks French, but isn’t.  However, it is a valid variant spelling found in a handful of European languages.

Cecile – Cecile is the French form of the name.  In Dangerous Liaisons, Cecile is the innocent corrupted by Valmont.  And yet, there’s something elegant and worldly about Cecile – a restrained, sophisticated name that invites a nickname like Cece for a child.

Getting to Cece: Repeating C-sound Names

Cascata – Years ago, I read that Cascata was the Italian word for waterfall – as in a cascade.  It struck me as a great possibility as a given name taken from the natural world.  And yet, let me be honest – I’ve yet to meet a Cascata.  But it could work, and the repeating C sound is there if you’d like to use this nickname.

Cassandra – Cassandra starts with a C and has the second soft ‘c’ sound the nickname requires.  So despite the spelling hurdle, I can easily imagine a Cassandra answered to Cece instead of Cassie.

Celeste – The ethereal Celeste also fits this category, and just like Cecile, might feel especially in need of a nickname.

Clarice, Clarissa – Don’t love the sound of Clari?  Cece is an easy substitute.

Clemency – As virtue names go, Clemency is less popular than Grace or Hope.  And yet, it’s a compelling virtue.  I suppose you could get Cece from Clementine, too, but Clemency’s second ‘c’ puts her on this list.

Cerise – The French word for cherry is obscure as a given name in the US, but now that there’s a doll in the Ever After High collection known as Cerise, maybe there’s some life to this imported word name.

Constance, Consuelo – Both elegant names with long histories and lovely meanings.  Constance means steadfast; Consuelo means consolation.  Consuelo Vanderbilt was a Gilded Age beauty who married into the Churchill family and became a Duchess.  Constance was at her most stylish in the 1950s and has since faded.  Connie might be a default nickname for either choice, but wouldn’t Cece be more sprightly and modern? Sicily – If you like the sound of Cecily, but prefer a more modern moniker, how ’bout place name Sicily?  The Mediterranean island is part of Italy, but was once its own kingdom, and has a fascinating history of its own.  The name comes from the Sicels, an ancient tribe mentioned in Homer’s Odyssey.

Getting to Cece: Less Expected

Celia, Celine – There’s no second ‘c’ in Celia or Celine, but they still seem like possibilities.  Does that open the door for Celina, and maybe even Selena, too?

Francesca – The sounds aren’t quite there, but if Frannie and Chesca don’t suit, Cece might be one to consider.

Getting to Cece: Unexpected Choices

Celandine – Celandine is a flower, but not one often bestowed as a given name.  Celadon is a color – a light jade green – and also the name of a shepherd in a seventeenth century French poem.  (I mention this because I was sure Celandine was a color when I went Googling – maybe it’s just me.)  It’s a rarity, and Cece might be a welcome short form for a young Celandine.

Capucine – This French flower name has the requisite two Cs – but neither makes the right sound.  They’re nasturtiums in English, so let’s agree that challenging as Capucine might be to wear, it’s a better bet than Nasturtia.  It’s been a stylish name in France in recent years.

Cedar – With such a strong C sound, would Cece be a stretch?

Cesarina – A clunky obscurity, one that screams, “I was named after my Italian great-aunt!”  But isn’t Cece the obvious nickname in English?

Ciel, Cielle, Ciela, Ciella, Cielo – All names that bring to mind the blue sky and the heavens, and all enjoying a modest uptick in use in the twenty-first century.  Just like fellow nature name Cedar, the C sound is so strong that Cece follows naturally.

Getting to Cece: Initials

The great thing about Cece is that nearly any combination of C names can lead to the nicknames.

What’s your favorite formal name for Cece?  And how would you spell it?