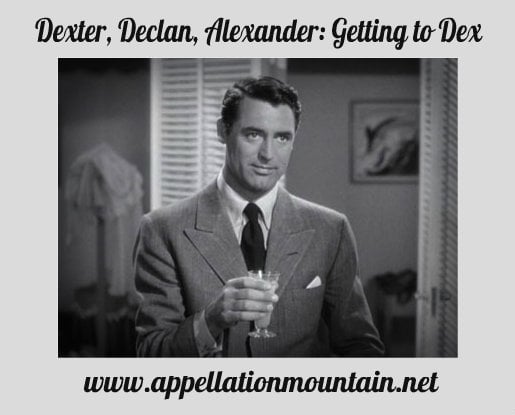 I have a new favorite nickname for boys: Dex.

The x makes him modern, a cousin for Jax.  But he fits with unpretentious retro choices, too, like Gus and Max.

If you came of age listening to the radio in the 1980s, you might also think of Dexy, as in Dexys Midnight Runners, and their smash hit “Come On Eileen.”  Heck, even you were born long after 1982, you’ve almost certainly heard the upbeat single.  As references go, I can hear myself singing “Too Ra Loo Ra” to a little one.

It is worth noting that Dex’s downside comes from the pop group, too.  Dex can be short for dextroamphetamine, a stimulant also known as Dexedrine – and sometimes abused.  Dexys Midnight Runners were club kids who could dance all night thanks to the drug.

Still, this name has plentiful history that it isn’t likely that anyone would find your child’s name a drug reference.    Dex also conjures up dexterity, originally a reference to the right hand, but now dexterous is a synonym for skillful, capable.

At first glance, the only logical way to get to Dex is Dexter.   But dig a little deeper and there are plenty of ways to get to this snappy nickname.

Getting to Dex: Classic Choices

Dex – Just as Max and Jax and Dax are all bestowed independently, it is perfectly possible to put just Dex on the birth certificate.

Dexter – He went from dashing – think of Cary Grant as C.K. Dexter Haven in The Philadelphia Story – to hopelessly out of step.  Now he’s famously worn by a fictional serial killer, a fact that could put this name on ice forevermore.  Instead, the show’s intriguing character seems to be part of the reason Dexter is attracting attention once more.  There’s also bestselling novel One Day, adapted for the big screen in 2011.  Factor in his -er ending, and there’s quite a lot to love about Dexter.  He’s the obvious, logical way to get to Dex as a nickname.

Declan – Just as Jackson invites Jax, Declan seems to lead naturally to Dex.  This name has a long history of use elsewhere in the English-speaking world, but was previously unknown in the US.  Since the late 90s, Declan has been on a straight path up.  He needs no nickname, but I suspect plenty of parents of new babies called Declan could land on Dex as an affectionate form.

Alexander – The letters and sounds are all there, but Dex isn’t an intuitive nickname for Alexander.  Still, with so many boys answering to Alex and Xander and even Zane, there’s room for a novel choice.

Getting to Dex: Novel Approaches

Decker – If Dexter’s too retro, Decker is similar, but totally different.  He’s a tough guy name, modern and capable.  It’s an occupational surname for a roofer, putting him in the company of Miller and other working names.

December – Are month names reserved for girls?  December feels like one that could work for either gender.  With no instantly obvious nickname, I’m tempted to suggest Dex.  December comes from the Latin decem – ten – because it was once the tenth month on the calendar.

Decimus – If Maximus is considered a powerful name for a son, how ’bout Decimus?  Despite his status as a legitimate ancient name, I have my doubts.  Decimate means destroy, and it feels like an inauspicious choice for a child.  But never say never … And if you should welcome a tenth child, it certainly is one of the options that fits.

Dexton, Dexten – It is possible to graft a popular ending onto Dex and create a surname-like option.  They’re far from common, but along with similar combinations, they’re heard more often in recent years.

Maddex – Maddox Jolie-Pitt’s name was as trendsetting as his Appaman tees a few years back.  Respell it and you’ll easily arrive at Dex.  I suppose you could stick with the most popular spelling and still refer to your kiddo as Dex.

Getting to Dex: Spell it Out

Daniel Edward Xavier – Choose any three names that spell out D.E.X. and there’s yet another possibility for getting to the nickname.   Options abound for the initials D and E.  Pickings are slimmer for the letter X.  Besides Xavier, Xan and Xander are obvious choices.

David Exton – Or pair the first initial D with a middle with a strong Ex sound.  Exton – the first name of Robert Downey, Jr.’s son, could be one to watch.  Exeter, Exley, and Essex spring to mind.

There you have it – from the obvious to the stretches, some great ways to get to Dex.  Which are your favorites?  Are there others that belong on this list?  And what’s your take on the initials approach – too wacky, or terribly clever?