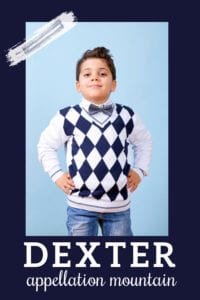 The baby name Dexter combines a preppy polish with a heck of an edge.

Thanks to Kayt and Natalie for suggesting today’s Name of the Day.

The baby name Dexter started out as a surname, from dyster – a medieval English occupational name for one who dyed wool. The wool industry was massive in the era; England exported sacks and sacks of it, both as raw material and finished cloth.

No surprise, then, that the surname Dexter caught on. And, like nearly any familiar surname, was sometimes given as a first, too.

But there’s a second meaning to the baby name Dexter.

In Latin dexter means skillful. Think of the word dexterous.

Over the years, it meant both nimble with one’s hands, and also clever and quick-witted. It’s an appealing image for a child’s name.

And yet, the baby name Dexter has always been on the fringes – more common as a last than a first.

But even those highs aren’t very.

One unforgettable Dexter: the dashing CK Dexter Haven in The Philadelphia Story.

Tracy calls CK Dexter Haven “Dex” most of the time.

It’s easy to fall in love with the name, especially after the couple lives happily ever after.

(And yes, the movie almost certainly gets credit for launching Tracy as a girl’s name. But that’s another post …)

Between the 1940s and the twenty-first century, a handful of notables wore Dexter as a first or last name.

Grammy-winning jazz saxophonist Dexter Gordon’s long career spanned from the 1940s into 1980s. He also established himself as an actor, earning an Oscar nomination for his portrayal of – what else? – a jazz musician in 1986 movie Round Midnight. (Fun fact: Gordon lived in Denmark for many years and served as godfather to Lars Ulrich of Metallica.)

Martin Luther King Jr.’s son, Dexter Scott King, was just seven when his father was assassinated. The civil rights leader’s tragic death put his entire family’s names in the headlines – and likely explains the 1968 peak for the baby name Dexter.

In 1995, we met boy genius Dexter on Cartoon Network. The star of Dexter’s Lab toiled in his secret laboratory while his sister Dee Dee and arch-rival Mandark foiled his plans. The series ran through 2003.

The animated series did nothing to revive the name. If anything, it cemented the sometimes-image of the baby name Dexter as a nerdy intellectual.

Where did the image originate? The French surname Poindexter literally means “right fist – it feels pretty tough guy. But the Felix the Cat cartoon gave us a super-genius kid by the name from 1959 to 1962. The image stuck, and almost certainly informed the naming of Dexter’s Lab. But it wasn’t the only one. Arnold Poindexter appeared in the original Revenge of the Nerds movie. (He’s the violinist.)

Lindsay’s Dexter earns his living as a Miami police expert, but moonlights as a serial killer. The twist? Dexter brings vigilante justice to those who escape the reaches of the law.

The series was wildly popular, and it tracks neatly with the name’s resurgence, too. In 2006, the baby name Dexter sat at a chilly #916. By the time the show’s final episode aired in 2013, Dexter ranked #382.

So we named our sons after a serial killer with a moral compass. That’s not such a surprise – villain names catch on all the time.

Or maybe parents were just drawn to the letter X and the -r ending. After all, the baby name Dexter combines some of the best elements of Jax and Carter, Alex and Ryder. But it also feels like more of a vintage choice, a brother for Theodore or Calvin.

After decades as a steadily obscure choice, the baby name Dexter feels slightly more familiar now. Though as of 2019, it stood at #464 – that’s not exactly Liam or Noah.

But with an on-trend sound and cool nickname Dex, it’s easy to imagine the baby name Dexter wearing well on a son born today.

What do you think of the baby name Dexter? 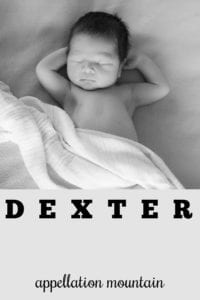