This post was originally published on September 21, 2008.  It was substantially revised and re-posted on January 26, 2015.

Today’s choice is originally a place name, but most famous bearer is best known for wandering far from home.

Thanks to Lola for suggesting our Baby Name of the Day: Xavier. 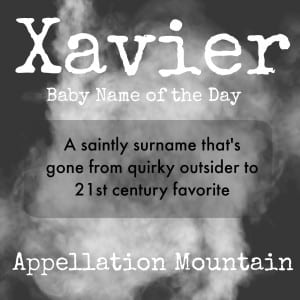 Francisco de Xavier was born in 1506, an aristocrat with an aristocratic moniker. de Xavier refers to his place of birth, the family castle in the Kingdom of Navarre.

The area was originally Basque, and Xavier comes from that language: exte berri – new house.

As a younger son, Francisco was destined for the priesthood. He met Ignatius Loyola at the University of Paris. The two are co-founders of the religious order commonly known as the Jesuits.

At a time when travel was rare, Francisco went globe trotting in service to his faith, converting new adherents as far away as India, China, and Japan.  He’s the patron saint of missionaries, and his final resting place in the Basilica of the Born Jesus in Goa, India.

Given his influence, it’s not surprising that plenty of children were named in his honor. The name is translated into virtually every European language – Saverio, Ksawery, Javier, and has a long history of use in Spanish and Portuguese-speaking countries.

Xavier: From the Fringes

Xavier may be popular internationally, but this name was rare in the US until the middle of the twentieth century.  The name did not consistently appear in the US Top 1000 until 1948.

Or maybe it was just tucked in the  middle spot, like Francis Xavier Atencio.  Known professionally as X Atencio, he’s known for writing the lyrics to Disney’s “Yo Ho (A Pirate’s Life for Me).” In 1963, Stan Leen and Jack Kirby gave the name to Professor X – Charles Xavier, powerful telepath, headmaster of a school for his fellow X-Men mutants, and a tireless advocate of mutant rights.  Thanks to a family fortune and a brilliant mind, Professor X is able to recruit and train others like him from across the world, and creates the group of superheroes.  The role was famously played by Patrick Stewart in all of the film adaptation to date.

Another association for the name comes fro the world of toys.  In the 1980s, folk artist turned entrepreneur Xavier Roberts introduced Cabbage Patch Kids to the world, complete with birth certificates and daffy, deliciously unusual given names.

Today, Xavier has fallen slightly, to #83 in 2013.  It’s a name so mainstream that plenty of families use the name without any sense of the religious associations.

And while the name is slightly less popular in the last few years, Xavier could have staying power. In a sea of invented names like Zayden and Axton, openly spiritual ones like Zion, and emerging possibilities like Cortez and Hendrix, Xavier feels solid.  Between the letter X and the ‘r’ ending, Xavier is a name that remains completely of the moment – and is popular enough to prove it, too.