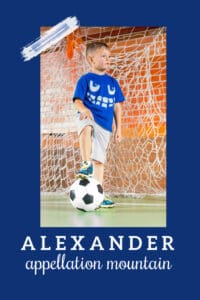 The baby name Alexander counts as a classic, worn from the ancient world into the present day.

In honor of my son, our Baby Name of the Day is Alexander.

There are two contenders for the earliest use of Alexander.

It comes from the Greek name Alexandros. The first element, alexo, means to defend. Andros refers to men.

There’s also Alaksandu, King of Wilusa. That might sound sci fi, but it’s actually a Bronze Age city, located in modern day Turkey. Alaksandu ruled circa 1280 BC. It might be another version of the same name … or not.

The name appeared in the New Testament, connected with several minor figures.

But there’s no question about the Alexander who made the name legend.

Born in 356 BC, Alexander III of Macedon conquered most of the known world, and became an almost mythological hero in his own time.

Alexander the Great is the kind of historical figure everyone recognizes, immortalized in songs and movies. Known as the “Alexander Romance,” an account of his life mixing fact and legend, circulated as early as the fourth century and was well-known in medieval Europe. Geoffrey Chaucer refers to it in the Canterbury Tales.

Separating fact from fiction is tricky, but what’s certain is that he’s inspired countless parents to choose the name for their sons.

ALEXANDER THROUGH THE AGES

While the name reached dizzying heights of popularity in the 21st century, it’s been in steady use across the ages.

Eight popes, between the years 97 and 1681, answered to the name. At least ten Christian saints, along with plenty of ancient writers, artists, and scientists were Alexander, too.

Alexander the Great ruled as a king, of course.

Centuries later, kings of kings of Scotland, Poland, Greece, and the former Yugoslavia all wore the name. Three Russian tsars answered to Alexander.

In England, Prince George Alexander Louis is the eldest son of Prince William, and second-in-line to the throne.

Between the royals and the saints, the name is widely used throughout Europe and the English-speaking world.

International variations abound. It’s Aleksandr or Aleksander in Russian and many Slavic languages; Alejandro in Spanish; Alessandro in Italian; Alexandre in French; and Alasdair or Alistair in Scottish, to name just a few.

​Given the name’s long history of use, it’s not surprising that a Founding Father was born Alexander.

Or maybe it is, because if you know his story, Alexander Hamilton was a surprising Founding Father.

Born out-of-wedlock in the British West Indies, he was orphaned at a young age and left penniless. But Hamilton cobbled together an education, went to work as a clerk, and eventually found his way to New York City. Before long, he was wrapped up in the burgeoning Revolution.

He’d serve with distinction in the war, and become an architect of the new nation, particularly the financial system.

Hamilton wasn’t the last notable by the name.

So does inventor Alexander Graham Bell, best known as the inventor of the telephone. Scottish physician Alexander Fleming is known for discovering penicillin. Just as the ancient world was shaped by a famous figure by the name, so too is the modern one.

Then there’s Irving Berlin’s hit Alexander’s Ragtime Band. Released in 1911, it became a hit, decade after decade, as new singers recorded it. Bessie Smith, the Boswell Sisters, Louis Armstrong, and Bing Crosby were just a few to find success with the song. It inspired a 1938 movie. And it’s on the soundtrack of 1997 blockbuster The Titanic, because, naturally, it really was in the songbook issued to

Broadway legend Ethel Merman recorded a disco version in 1978. This is a song that just won’t quit.

Chances are you’ve heard some version of it, even if you’re not aware.

Incidentally, there was a real band leader with the name. Only it was Jack Alexander, a friend of Irving Berlin. Known for his cornet-playing, Berlin made him immortal – even though he’s mostly lost to history.

The surname has been in use for generations. And while forms like Macallister and Alexandrowicz are heard, it’s fairly common as a surname without alteration.

Judith Viorst’s award-winning children’s book Alexander and the Terrible, Horrible, No Good, Very Bad Day and the Alex the Lion from Madagascar and the sequels are kid-friendly.

In the 1980s, a young Michael J. Fox rose to fame as Alex P. Keaton on sitcom Family Ties.

Baseball great Alex Rodriguez and ice hockey’s Alex Ovechkin are two of many successful athletes by the name.

Swedish actor Alexander Skarsgard rose to stardom in True Blood, and most recently starred in The Northman.

Speaking of Alex and Lex, there’s more than one way to shorten Alexander.

Alexei, Alexey, and Alexis are all related names.

Xander, sometimes spelled Zander, was boosted by Buffy the Vampire Slayer in the late 1990s. Just like Liam from William, it’s now given as an independent name.

Most Als are something else – think Alfredo (Pacino), Alphonse (Capone), Albert (Gore), Alan (Al). But they could be Alexander.

There’s the Slavic Sasha, the re-arranged sounds Dex, and the Scottish Alec, as well as Andy, Xan and more.

All of this makes it sound like Alexander is a boy name that’s been topping the charts since the beginning of time.

Actually, that’s not true at all.

That’s not obscure, but it does mean that names like Gordon, Norman, Bernard, Clarence, Guy, Reginald, and Edwin – names we think of as traditional, but not popular today – all outranked Alexander.

In recent years, it’s also been a Top 100 choice in Poland, Switzerland, Norway, the Czech Republic, and throughout much of Europe.

At the same time, the world met quite a few girls named Alex.

Many of them were Alexandra, of course, a name nearly as popular as the masculine form. Add up Alexa and Alexis and other Alex- names girl Alexes are quite common.

That can make the name feel more common than the numbers already suggest.

Overall, Alexander is a time-tested favorite, an enduring classic with history aplenty.

While it’s among the most popular baby boy names for recent generations, it feels traditional rather than trendy.

Like many current favorites, it’s a longer name, fitting right in with Sebastian and Oliver and Theodore. But it’s also a verastile choice, one that reduces to many a nickname.

While there will always be another Alex, that doesn’t diminish the appeal of this celebrated name.

What do you think of the baby name Alexander? 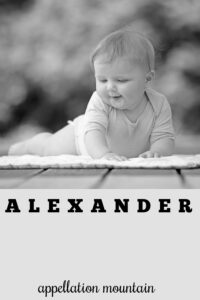 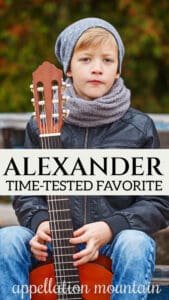