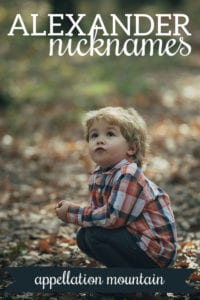 The name is a classic, used from the ancient world of millennia past to the playgrounds of today.

Most Alexanders seem to answer to Alex. So do plenty of Alexandras.

But let’s say you’re an Alexander after something a little less expected. Or maybe you’re planning to name your son Alexander, but he’s going to be a junior or even a third, and another Alex just won’t work. It could be both – you love Alexander, but you’re not content to use the default nickname.

Like any classic, there are options galore. Read on for some great, unexpected nicknames for Alexander – and maybe for Alexandra, too!

Al instantly transforms Alexander from a grand and ancient name to a friendly guy-next-door pick. It’s short for all sorts of names, including Albert, Alfred – as in Alfred Delvecchio, owner of Al’s Place on iconic sitcom Happy Days – and Alfredo, the given name of Al Pacino. In our age of Jack and Hank, why not Al?

The difference between Alex and Alec is subtle. And it might be an invitation to correcting everyone forever. “No, not Alex. Alec, with a c. Like Alec Baldwin. A-L-E-C …” But if you can overlook the occasional hassle, Alec has a cool, unexpected vibe. It’s slightly Scottish, and far more rare than the ends-in-x version of the name.

Strictly speaking, these don’t count as nicknames for Alexander. Alexei is the Russian form of Alexis, a name with similar roots, but very much a separate name. And yet, it’s so easy to get to Alexei – or Alexi, or maybe Alexy? – from Alexander. It’s also spelled with a k – think Aleksey – when transcribed from Russian, but they spell Aleksandr differently, too.

I’ve known a girl named Alexandra who answered to Allie. So why not a boy Alexander called Ally? It was my son’s nickname for the first seven years of his life, and we still use it at home. While he prefers Alex now, there’s something about Ally that feels quite fresh and spirited on a boy, along the lines of surname names like Riley and Brady.

When I mentioned this as a possibility to my son Alexander, he scoffed. “That’s short for Andrew!” Agreed. Andy naturally belongs to Andrew, or maybe Anderson. And yet, there’s no reason it couldn’t work for Alexander, or Evander or any other ends-in-ander name. As a reader pointed out, that goes for Anders, too.

Dex brings to mind Dexter, which could be a murderous television character, an animated boy genius, or – my favorite – Cary Grant’s handsome character in The Philadelphia Story, C.K. Dexter Haven. Grant is paired with Katharine Hepburn in the romantic comedy, and she calls him Dex. It’s enough to make you want to use the nickname, if you weren’t already sold by the on-trend sound. But the letters are all there to make Dex short for Alexander, too. It’s my personal favorite.

It works for Lex Luthor, right? Okay, so maybe the Man of Steel’s arch-nemesis isn’t obvious inspiration for your child’s name, but there are reasons to think that Lex would wear well. We’re big on ends in x names for boys right now, and Lex fits with those bold boys’ names we love, like Ace and Jett.

Sasha sounds like a girls’ name in American English, but it’s a traditional Russian diminutive for – you guessed it! – Alexander. Some high profile parents have embraced Sasha as a boys’ name. In 2007, Liev Schreiber and Naomi Watts welcomed Alexander Pete, called Sasha. Chris Hemsworth and Elsa Pataky named one of their twin sons Sasha in 2014. (His twin brother is Tristan.) And singer Shakira and her footballer husband, Gerard Piqué, are the parents of sons Milan and Sasha. I’ve heard it here in the Washington DC ‘burbs, too. That’s a solid case for naming your son Alexander but calling him Sasha.

The sound is right there – Alex ZAN der. And so Xan is as logical a nickname for Alexander as Liz from Elizabeth. And yet, Xans seem to be rarer than rare. The Wonder Twins – 1970s-era additions to DC Comics Super Friends – were Jayna and Zan. The extended British royal family includes teenaged Xan Windsor, Lord Culloden, currently 29th in line to the throne, and son of Alexander Windsor, Earl of Ulster.

Americans and most English speakers tend to nickname by keeping the first syllable – William becomes Will, Robert becomes Rob. But those names could easily become Liam or Bert, too, and so it is with Alexander. Drop the first three letters, and there’s a whole other name waiting. It was boosted by Joss Whedon’s likable character on Buffy the Vampire Slayer, whose full name was Alexander Harris. Xander and Zander are now bestowed as independent given names, too.

We knew an Alexander called Zane, so maybe that’s why this seems straightforward and obvious to me. Though truly, Zane is a surname of uncertain derivation. It could be related to Zahn (teeth in German) or perhaps a form of John. (Xan, too, is sometimes considered yet another form of the evergreen John.) It became popular thanks to bestselling author Zane Grey, known for his fictional accounts of the Wild West – he was not born Alexander. He started out as Pearl Zane Grey. (Yup, Pearl!) But the sound isn’t a big stretch from Alexander. Singer Zayn Malik points to yet another origin for the name – it means beauty in Arabic.

Are there any nicknames for Alexander that I’ve missed?

First published on February 5, 2016, this post was substantially revised and re-published on April 21, 2020. 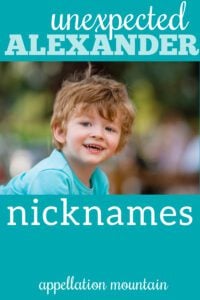