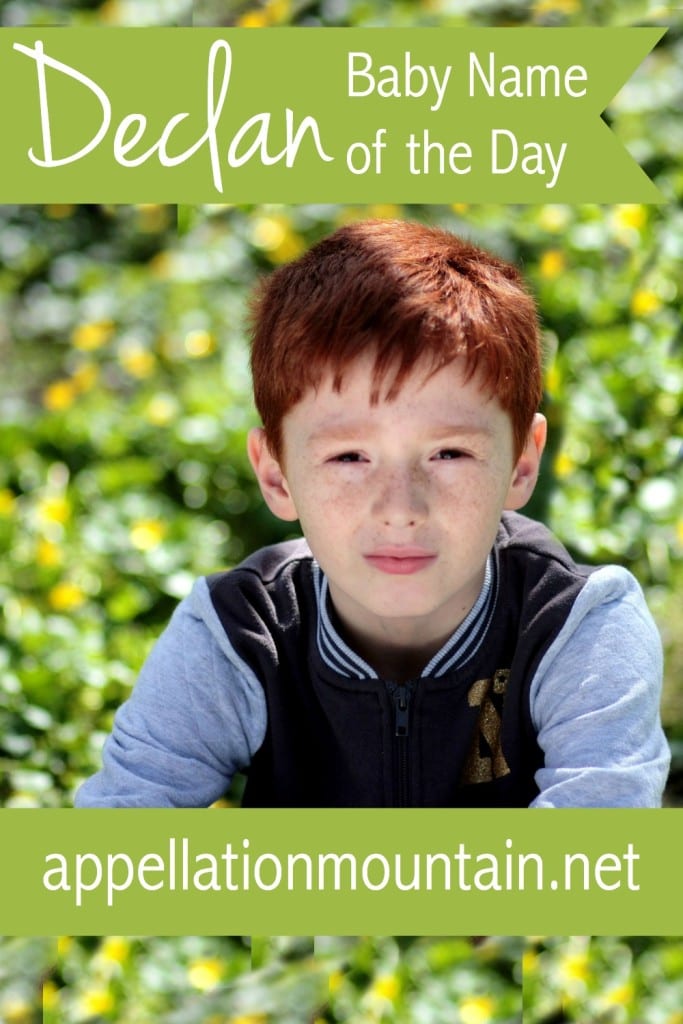 Declan is an Irish heritage choice leaping up the popularity charts throughout the English-speaking world.

Before Saint Patrick arrived in Ireland, the future saint Declan established a monastery at Ardmore. The ruins are still a destination for pilgrims, all these centuries later.

Unlike the Roman-born Patrick, Declan was Irish by birth, born in Munster. Some reports make him a prince of the Déisi, an ancient Gaelic people who ruled the area. Like several of his countrymen, he traveled to Rome for an education, and was also ordained there. If it’s true, he’s one of several religious leaders who brought Christianity to Ireland before Saint Patrick.

The name’s meaning is lost, though it’s often given as “man of prayer.” Other accounts link it to the word dag – good – and lan – full, which gives the meaning “full of goodness.” The latter is reported by Baby Names of Ireland.

Head to the UK, and Declan has always been reasonably familiar. As recently as 2004, the name still ranked in the British Top 100.

In the US, the name debuted in the Top 1000 in 1998, just as Brian, Ryan, and even Brendan were entering dad name territory, and a few years before we reached peak Aiden.

The likely reason 1998 was Declan’s year? In 1997, Richard Gere played a former Irish Republican Army sniper by the name in The Jackal. Gere’s character reluctantly agreed to help the FBI and Russian intelligence hunt down an assassin.

It’s not just that Declan is Irish, though American parents have been embracing those names for decades. It also helps that the name is two syllables, ending in n, just like Mason, Logan, Ethan, Dylan, and a long list of other favorites with all sorts of origins.

The Jackal might have introduced Declan to an American audience, but it wasn’t the first use of the name.

It’s the given name of London-born musician Elvis Costello, already well known in the US by the late 1990s.

It’s also the full name of BBC television presenter Dec Donnelly, best known as half of Ant and Dec. The duo has hosted everything from children’s television to reality competitions like Britain’s Got Talent.

Television has given us characters by the name on Kyle XY, Degrassi, Mysterious Ways, and, most notably, Revenge. The Revenge character is the teenaged half-brother of bar owner Jack, so the name is actually a plausible choice.

Cyndi Lauper used the spelling Declyn for her son, born in 1997. In 2014, Fall Out Boy lead singer Patrick Stump gave the name to his firstborn with wife Elisa Yao.

When I first published this post in March 2009, I wrote, “be aware that this name could follow other Irish favorites up the charts and easily land in the Top 200 – or higher.”

That’s not necessarily a dealbreaker. It’s still far less common than many an Irish heritage option. If you’re looking for a familiar, but not very common name for a son, Declan remains one to consider.

What do you think of Declan? Is this name headed for the US Top 100?