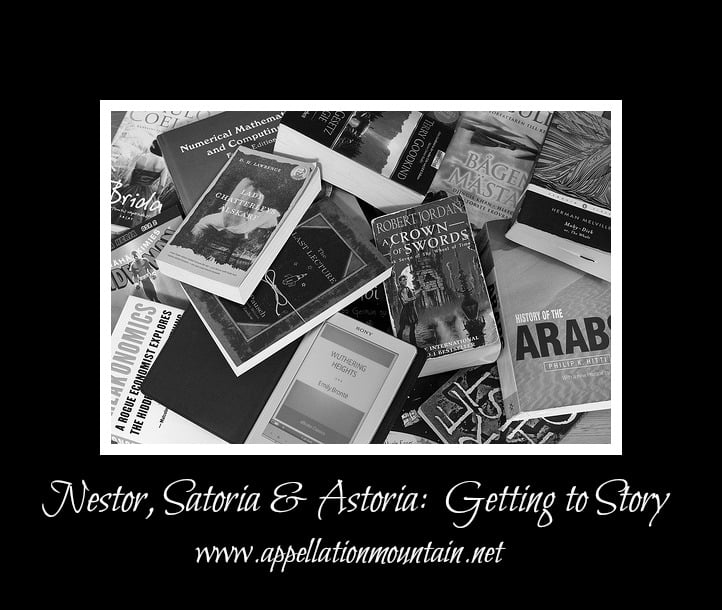 Story is a literally literary name, an appealing option for both genders.  It’s fresher than Corey, and a little bit less traditional than Rory, both of which have been worn by boys and girls.

But what if you’re not quite ready to put Story on your child’s birth certificate?  Are there names that could serve as formal versions of Story?

There are some options.  None of the names are plain vanilla possibilities, and some of them might feel like a stretch.

Honestly, I’d never considered it, until Alexandra made the suggestion.  But there are options, and those options are a rich and varied bunch, with choices for boys and girls to ponder.

If you’re mad about the name Story, but want a formal option for your child’s birth certificate, read on!

Getting to Story: Options for Girls

Astoria – She’s a place name and an interesting possibilities for so many reasons.  Story is an obvious nickname, but there’s Tori and Rory, too.

Satoria – There have been a handful of girls named Satoria, from the early 1980s into recent years.  But what are her origins?  My first thought was Jack Kerouac’s Satori in Paris.  It’s the story of Kerouac’s search for his family’s roots in France, but satori is a Japanese word, its meaning something like “awakening” or “enlightenment.”  It’s used in Buddhism, too, adding yet another reason to consider Satoria – or maybe just Satori – as a given name.

Victoria – She’s an undeniable classic, and I’d love to suggest her as a way to get to Story.  The only trouble?  There’s no s.  Not even a hint of the sound.  This would be more of a stretch than the first two, but on a positive note, Victoria is probably more of a classic fallback kind of name than the others.

Getting to Story: Options for Boys

Astor – If we can consider Astoria for girls, why not Astor for boys?  It refers to a hawk, specifically a goshawk, and comes from Occitan, an old romance language still spoken in parts of France, Spain, and Italy.  Thanks to the richer-than-Midas Astor family, this surname is familiar, and could be wearable.

Castor – Astor got me thinking about all of those other ends-with-stor names for boys – all two of them.  Castor and Pollux were twin brothers in Greek and Roman myth, one mortal and one divine.  They’re the twins represented by the constellation Gemini.  If we can name boys Orion, why not Castor?  I’m tempted by his sound, but castor oil gives me pause.

Christopher – He’s the masculine equivalent of Victoria on this list, but Christopher does have all of the required sounds to get to Story.

Nestor – Another ends with -stor possibility, Nestor was a member of the Argonauts in Greek myth, and he fought in the Trojan War.

Salvador, Salvator, Salvatore – They’re Spanish and Italian forms of a Latin name meaning savior.  Today, it rings Italian, thanks to countless Italian men called Sal, and also artistic – think Salvador Dali.  If you’re a Salvatore after something a little different, Story could be the short form to consider.

Stafford, Stanford – There are a handful of surname names that could lend themselves to Story, but somehow I cannot imagine the same parents who like Stafford choosing to use a nickname like Story – it feels like a mismatch.

Stesichorus – Worn by an ancient poet, some six hundred years BC, little of Stesichorus’ work survives.  This makes it an unlikely pick for a child’s name – okay, that’s just one of the reasons why it is hard to imagine a child called Stesichorus.  And yet, this list was so short, I thought I ought to include it!

Would you consider Story as a name for your child?  If so, would you use a formal version for the birth certificate?  Which ones?  And are there other names that should be on this list?