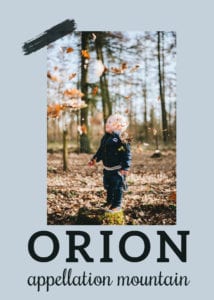 The baby name Orion belongs to a legendary hunter, immortalized in the night skies.

In Greek myth, Orion was a heroic figure, both in life and beyond. Odysseus met him in the underworld.

Written accounts of his feats are lost, but we know a few things about the legendary hunter: he could walk on the water, because his father was Poseidon, god of the oceans. He wasn’t always virtuous or even-tempered. In fact, he met his death at the hands of an oversized scorpion, dispatched by Gaia. Why, you ask? While hunting, Orion boasted that he could kill every animal on earth. Gaia – the personification of the Earth – took revenge.

After his death, the gods took pity and allowed to spend the hereafter as a constellation.

Many cultures recognize the pattern of stars, giving it different names and attaching other stories.

There are references to the constellation dating back more than 30,000 years, and many cultures recognize the pattern and have their own names and stories associated with the stars.

The Orion Nebula is also located within the constellation, bright enough to be visible to the naked eye in some places. Records date to the early 1600s.

SHIPS AND SONGS AND REAL BOYS, TOO

The Royal Navy gave the name to ships. Ford sold an Orion sedan in Europe. Various space-going vessels have used the name, too. Jethro Tull and Metallica both wrote songs about the hunter. A 1977 novel titled Orion supposed what would happen if a rock star faked his own death, and then a real singer took the stage name Orion in 1980, fueling the stories that Elvis Presley was alive.

Orion Pictures released dozens of successful movies in the 1970s, 80s, and early 90s, from Amadeus to Silence of the Lambs.

Despite all of those fantastic uses, there have been real men who answered to the name – a handful in the nineteenth century, and even more throughout the twentieth. Writer Mark Twain had an older brother, journalist and Nevada pioneer Orion Clemens.

One of the youngest ever Medal of Honor recipients was a drummer boy in the Union Army, a child with the grand name Orion Perseus Howe. Just twelve years old when we he set out to join the Illinois volunteers, Howe would distinguish himself on the battlefield two years later. He remained on the field until he’d reported the need for additional ammunition. Howe was seriously injured in the line of duty, but after recovering, returned and continued his service. He lived to the ripe old age of 81.

Until recent years, Orion was seen in the night sky, not the playground.

What’s behind the rise of the baby name Orion?

It’s similar to long-time favorite Ryan, as well as traditional boy names like Julian and Adrian. Many of those choices currently feature in the US Top 100.

Plus, we love vowel-forward names, like Oliver and Owen.

Science fiction uses are plentiful, from a computer game series to a race of aliens in Star Trek, and a series of novels by Ben Bova. And, yes, there’s a minor Harry Potter character by the name, Sirius Black’s dad.

Overall, the baby name Orion offers a stylish, on-trend sound at a moment parents are looking to mythology for inspiration. Most of us can look in the night sky and pick out the constellation, even if we know little of the hunter’s story.

It combines to make a name that feels mainstream and just a little bit daring, all at once.

What do you think of the baby name Orion? Have you met any boys with the name? 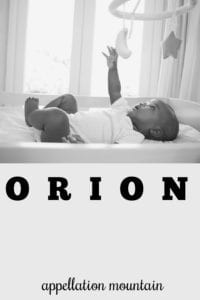