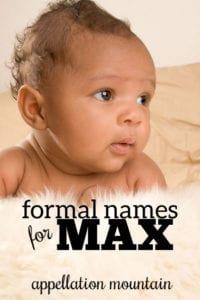 Maurice Sendak’s legendary 1963 children’s book gave a grandpa name to a young boy, and the parents who grew up hearing it as a beloved bedtime story have done the same. Only now, Max feels exactly right for a child.

But let’s say you find Max too brief to complete your son’s birth certificate. Formal names for Max abound. Let’s look at the options.

Keeping it simple works, of course. Even at a mere three letters, Max offers a satisfying, complete sound. At #136 in 2018, it stands on its own – not too common, not too unusual.

We’ve sometimes seen the spelling Maxx, too. It feels a little extreme, more in the key of epic boy names and a little less on the classic side. Just 112 boys received the double-X spelling in 2018.

Maxwell, he of the silver hammer, adds a Beatles song component to the children’s literary vibe.  At #135 in 2018, it’s actually slightly more popular than just Max. Originally a surname related to Magnus, it fits right in with Carter and Landon and Hayes.

Maxfield offers a similar style, but is far less common. American artist and illustrator Maxfield Parrish makes the name familiar – he’s best known for his illustrations of children’s books.  Incidentally, Parrish was born Frederick, and adopted his grandmother’s maiden name as his professional name. It’s never appeared in the US rankings.

Maxim could be a great name, the go-to for parents seeking something slightly more formal for a son. It feels vaguely European, maybe because it’s Russian and Czech, and also the name of a famous Paris restaurant. But then there’s the racy men’s magazine.  Which is too bad, because it really is such a clever choice. Still, it makes the current US Top 1000 at #901.

Maxton belongs with the modern inventions, a riff on Axton and Jaxton and company. At #836, it’s heard occasionally in the US.

Maxen might be another novelty, or it could be a simplified spelling of Macsen. Macsen, in turn, comes from the Welsh form of Maximus. So it counts as a Max name, too. Neither spelling has ever made the US Top 1000.

TAKING IT TO THE MAX

Massimo feels stylish. It’s the Italian version, and feels vaguely familiar in the US. But it doesn’t make the current Top 1000, and seems like a harder way to arrive at the nickname Max.

Maximilian fits right in with Alexander and other long boy names. They’re elaborate choices, tied to saints and kings. At #448 in 2018, it’s pretty mainstream.

Maximiliano actually ranks higher than Maximilian, at #267.  It’s the Spanish form of the name, a romance language choice that adds even more sound.

Maximinus comes via ancient Rome, and while it’s rare, it’s wearable. It doesn’t rank in the current Top 1000.

Maximino comes from the Spanish form of Maximinus, and might make a great romance language choices that’s slightly shorter on syllables, but still has the great ‘o’ ending. It also fails to make the current US popularity charts.

Maximo also appears is Spanish, and currently stands at #800 in the US.

Maximus is a big, bold name. That’s not because of syllables – it’s really just three! But it came into general use following Russell Crowe Oscar-winning turn as an ancient warrior in 2000’s Gladiator.  It means “the greatest” and could inspire some serious achievements. At #212 in 2018, it’s one of the more popular formal names for Max.

Maximum might be another epic boy name, one that makes even Maximus feel understated. Five boys were given the name in 2018.

Do you love Max?  Would you use a longer form, or just stick with Max?  Are there any possibilities I’ve missed? 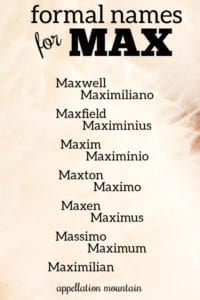