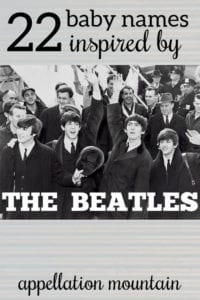 The Beatles may have played their last show long ago, but Beatles baby names still top the popularity charts.

Their music occupies a special place in popular culture. In their heyday, the band was so famous that everyone knew their songs. More than fifty years after the release of Abbey Road, we all recognize the album’s cover art, recreated countless times. And their songs are part of the backdrop of our lives, from bittersweet “Yesterday” to the upbeat “Saw Her Standing There.”

Legendary album Abbey Road was named for a real place, home to Abbey Road Studios. (And yes, that’s the street they’re crossing in the famous picture.) There’s no song with Abigail or Abbey in the lyrics, but there’s a Beatles link that might still appeal.

You might not recognize “Clarabella.” Originally written for and recorded by another pop group in the 1960s, the Fab Four performed this one live on the BBC in 1963. Decades later, the band released a recording, but it remains seldom heard.

“Eleanor Rigby” might feel too bleak to inspire parents. But the haunting song is unforgettable, and adds a little something to this enduring, classic girl’s name. Fans have been trying to find the real Eleanor Rigby for years, but Paul McCartney has often said that she’s pure fiction.

File Julia with Clarabella – a rarity, though this is a meaningful one. A solo composition by John Lennon, it was written in memory of his mother, Julia. She died in an accident when he was just seventeen.

“Maxwell’s Silver Hammer” might be a darkly comic spree of mayhem, but it’s also chock full of great names. Tailored and strong, Joan belongs to another age – but could be ready for revival.

Loretta faded in the years after the Beatles chose it for a name in “Get Back.” It’s been out of the US Top 1000 entirely since the 1990s, but Sarah Jessica Parker did name one of her daughters Marion Loretta in 2009.

Despite assumptions that “Lucy in the Sky with Diamonds” was a not-too-veiled drug reference, the official story is that John’s son Julian drew a picture at school with the title, inspired by classmate Lucy O’Donnell. Lucy offers the best of both worlds – a traditional, on-trend girl’s name, but also an unmistakable tie to one of the most enduring Beatles’ songs.

A gentle love song dominated by the piano track, the explanations for “Martha, My Dear” are several. One indisputable fact: Paul McCartney had a sheepdog called Martha.

So many songs mention Mary, from Jimi Hendrix to Tom Petty to Lady Gaga. But Beatles’ masterpiece “Let it Be” refers to “mother” Mary, earning the name a spot on this list. Despite sounding religious, Paul McCartney explained that it refers to his mother, whose name was Mary.

Already popular when the band released their 1965 ballad, “Michelle” probably gets some credit for later-born Michelles. Today, the lyric “Michelle, ma belle …” would probably inspire parents to name their daughters Belle instead.

The wife in “Ob-La-Di, Ob-La-Da” answers to friendly name Molly. Unlike Desmond, no obvious inspiration exists for the name. But it sounds exactly right in the lyrics.

The poetic Pamela became “Polythene Pam” in a 1969 single, inspired by two things: an early fan, and some less-than-G rated exploits John Lennon remembered. Still, “she’s killer diller when she’s dressed to the hilt” is just plain fun to say. The name is also mentioned in “Mean Mr. Mustard” on the same album.

The Beatles borrowed Penny Lane from a street in Liverpool, and a bus route, too. While we think of Penny as short for the Greek Penelope, this name claims a different source. The surname Penny belonged to a Liverpool merchant, for whom the street is named.

A virtue name that feels at home on Plymouth Rock, the Beatles song transforms it completely. John Lennon wrote the song for a real-life Prudence – actor Mia Farrow’s sister – during their tumultuous time in India.

A parking ticket inspired Paul McCartney was inspired to pen “Lovely Rita.” She wrote him up in front of Abbey Road studios, or so the story goes. Hollywood icon Rita Hayworth lends the name some glam, but this name exited the Top 1000 back in the early 2000s.

Rose and Valerie are screaming from the gallery when Maxwell goes to trial in “Maxwell’s Silver Hammer.” Given the countless Rose references, this doesn’t scream Beatles baby names, but it counts.

Sadie belongs to a whole wave of retro nickname names for girls, like Millie and Maisie. No real life inspiration exists for this name’s use.

Little Richard scored a hit with “Long Tall Sally” back in the 1956. The Beatles covered it their early days. Both Sally and Sadie come from the Old Testament Sarah, a traditional name used steadily across the centuries.

Valerie is screaming in the gallery with Rose during the trial of Maxwell. While the mention is brief, it’s memorable.

File Harrison with so many surname names for boys parents love. It’s less clearly tied to the musician than Lennon or McCartney, but George’s surname still fits with Beatles baby names.

“Get Back” opens with this deliberately ambiguous name.

Used for boys and girls, Lennon has ranked in the US Top 1000 since 2008. Depending on the source, the surname means sweetheart, blackbird, or cape. It fits in with Landon and Logan, London and Lauren.

“Maxwell’s Silver Hammer” seems unlikely to inspire parents, what with all the murder and mayhem. But the name picked up in use in the years following the song’s release, and it rose to become the king of the Max names.

Have I overlooked any great names Beatles baby names? Would you use any of these – and if so, is it a tribute to the song or mere coincidence? 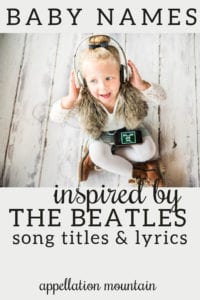 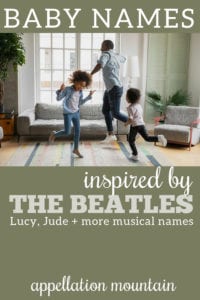