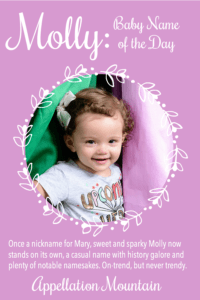 Molly started out as an affectionate form of the enduring Mary, a spunky nickname form that now stands on its own.

Thanks to Kristin for suggesting our Baby Name of the Day.

We can’t talk about this name without discussing Mary, that long-time #1 name for girls.

Long before the internet, parents chose from a smaller list of possible names. To distinguish your daughter Mary from your sister’s daughter Mary and your aunt Mary, a wealth of nicknames evolved.

The path zigs and zags, but Mary became Mare and Mal and Mally, which led to Molly – and eventually Polly, too. Plenty of names dropped an -r sound for an -l – think of Harold’s Hal or Dorothy’s Dolly.

This means we can’t say with confidence how many women have answered to Molly over the years, as many of them were recorded as Mary.

The numbers suggest it was more than a few. After all, Mary was the #1 given name for girls in the US from 1880 right though the 1950s. Molly appeared in the rankings, too, hovering around #400 for most of the same time period. Mollie – spelled with an -ie – was far more popular for much of that time.

Only as Mary started to fade did Molly rise.

That makes this name a quiet favorite, used steadily over many years.

One of the most famous bearers of the name was born Margaret – and known as Maggie in life.

Socialite Margaret Brown boarded the ill-fated maiden voyage of the Titanic, and later organized life boats as the ship sank. Afterwards, she argued that they should turn back and look for survivors. The nickname came courtesy of a semi-biographical 1960 Broadway musical, first performed well after Mrs. Brown’s 1932 death.

The “unsinkable” title lends the name a certain spirit and gumption.

One more to consider: Mrs. Mary Hays, known as Molly Pitcher. During the American Revolution, she served by her husband’s side in several battles. She started out as a nurse and general camp housekeeper, but when her husband was injured, she took his place at the cannon. Pitcher was immortalized on a US postage stamp in 1928. There’s a second similar story, with a Margaret “Captain Molly” Corbin. Corbin became the first woman in US history to earn a military pension.

There’s something slightly Irish about the name. Part of that comes down to use, but there’s also the Molly Maguires, an Irish secret society big in the Pennsylvania coal mining region in the 1870s. Part-fraternal organization, part-early union, stories about the origin of their name vary. In some cases, the group formed to help a widow by the name, whose plight inspires the organizers. In other tellings, she owns the tavern where the group first met.

It’s another reason this good girl picks up just a little bit of edge.

And one more: back in the day, “gun moll” referred to a gangster’s girlfriend.

If this names makes you think “Good Golly,” credit Little Richard. Legend says that he borrowed the phrase from a DJ named Jimmy Pennick. Either way, the 1958 classic remains an iconic rock and roll song all these years later.

Other songs include the name, too, like a 1995 homage to Ms. Ringwald. There’s also Flogging Molly, a Celtic punk band with a dedicated following.

With all of these positives, why is the name slipping?

Maybe that comes down to another slang use of the name. The drug MDMA – or something similar – is sometimes referred to by the name. If you’re high on the drug, you’re rolling on molly.

It’s just enough of a concern to give parents pause.

Overall, this name feels informal and sweet, but also energetic and even gutsy. It’s every bit as wearable as other casual favorites, like Sadie and Millie, but feels like more of mainstream favorite than a vintage revival.

As for the drug reference? Molly has endured other slang uses, and with figures like Ringwald, Weasley, and the unsinkable Mrs. Brown, it’s a safe bet that we’ll be hearing this name for girls for generations to come.

What do you think of Molly? Do you prefer it as a nickname for Mary, or does it stand on its own? And do you think the drug reference is a long-term problem?