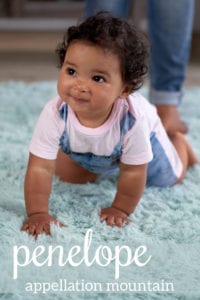 Our Baby Name of the Day was inspired by this movie.

We first heard this name in the ancient world. Faithful wife to Odysseus, she waits at home while he spends a decade adventuring following the Trojan War. He’s gone so long that many assume he must have perished, leaving Penelope a wealthy widow. Potential suitors gather, but she keeps them at arm’s length by weaving – and then, each night, carefully unraveling – a burial shroud.

All ends well – her tactics put off her would-be pursuers until Odysseus could return and prove his identity.

In Greek, penelops means duck, so that’s one possible origin for Penelope. Another is pene – threads, making this name mean weaver.

One possible reasons: a British ship in service during the first World War might’ve made just enough headlines to inspire parents. Other light cruisers from the era bore similar names from myth.

Joyce’s take on the ancient tale reinvents Ulysses and Penelope as Leopold and Molly Bloom. Modernist literature seems an unlikely inspiration for names, but it might have been just enough to raise Penelope’s stature more.

Heading into the middle of the twentieth century, the name must have been seen as quirky, literary, maybe a little bit British.

Almost Famous came out in 2000, giving us Kate Hudson as Penny Lane. Hudson earned an Academy Award nomination and won a Golden Globe for the role.

The next year, Penelope almost doubled in use.

But Hollywood probably gets credit for the name’s rise. After all, in 2001 Spanish actress Penelope Cruz gained fame stateside. appearing in Captain Corelli’s Mandolin, Blow, and Vanilla Sky. Her career continued to flourish, and by 2008, she’d added an Academy Award to her impressive resume.

Another silver screen boost came in 2006. Christina Ricci played the title role in Penelope, a film by Reese Witherspoon. It wasn’t exactly a smash, but the quirky tale – and twist of a happy ending – gained a following.

Back in 2010, I wrote: “If you’re looking for a name for your daughter, Penelope is a strong choice. But proceed with caution – it might also be an increasingly popular one.”

Along the way, Penelope has shed that quirky-cool, eccentric-British vibe that it carried through the twentieth century. Today, it’s a girl next door pick, bouncing and sparky, but with the steadfast original Penelope lending it some weight.

Factor in nicknames galore, and it’s no surprise this name appeals to a growing number of families.

If you don’t mind the possibility that your daughter’s name will repeat, it’s a fun and fascinating choice, as lengthy as Olivia, as vibrant as Zoe, and with so many stories to tell.

Would you consider this name for a daughter? With or without a nickname?

This post originally ran on March 9, 2008. A substantial revision was posted in August 2010 as part of rerun week. A special thanks to Fran for suggesting this one! Additional revisions followed on May 9, 2020.