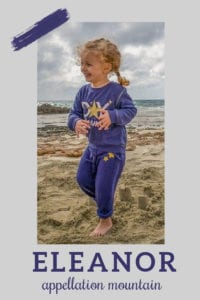 Regal, capable, and classic, the baby name Eleanor makes a great choice for a daughter.

Thanks to Nessa and JNE for suggesting our Baby Name of the Day.

Influential queen Eleanor of Aquitaine, born around 1122, sometimes gets credit as the first bearer of the name.

Her mother answered to Aénor. Legend tells that Aenor named her daughter Aliénor from the Latin phrase alia Aenor – the other Aenor. Whispered into French and English, it took its current form.

William the Conqueror’s aunt answered to the name Eleanor a solid century before these events.

Maybe her mother liked the play on words. Or maybe they came from a long line of bold namers. After all, Aenor’s mother is recorded in history as Dangereuse. (She was born Amauberge, or maybe Amalberge, a saint’s name, but history prefers her nickname.)

She may not be the first, but her legacy makes her unforgettable. The well-born heiress boasted good looks and book smarts. Educated in both traditionally feminine and masculine pursuits, she inherited her father’s holdings as a teenager, becoming one of the most eligible brides in all of Europe.

No wonder, then, that the accomplished aristocrat became Queen of France and later Queen of England. In Paris, they Latinized her name as Helienordis.

Powerful, intelligent, and capable, the Duchess and Queen served as patron to writers, schemed for her children’s political advancement, led an unsuccessful crusade, and determined her own fate to a degree unthinkable for most women in her era.

No surprise her name endured.

MIDDLE AGES TO THE MODERN WORLD

Plenty of other women wore the name, including many a queen and aristocrat. By the 1200s, the baby name Eleanor entered regular and steady use.

But perhaps the most enduring association in the US is former First Lady, Eleanor Roosevelt.

Born into a privileged family and highly educated, Miss Roosevelt – she and her future husband were fifth cousins – made waves as an activist and political campaigner in an era when women did not engage in public life. She proved an unconventional First Lady, too, publishing a newspaper column, holding press conferences, and speaking widely.

In 1940, Mrs. Roosevelt became the first First Lady to speak at a national party convention, and she served as a powerful advocate for the early civil rights movement.

It seems impossible to list all of the ways she changed the role. Controversial at the time, she continued in public life, becoming the first chairperson of the United Nations Commission on Human Rights.

Many consider her one of the most admired women of the twentieth century.

With admirable namesakes and nicknames galore, no surprise that the baby Eleanor counts as a classic today. The the name is enjoying new heights of popularity, too. It re-entered the US Top 100 in 2014, for the first time since the 1940s.

Today it makes a rock solid choice for a daughter.

What do you think of the baby name Eleanor? Would you use it in full, or with a nickname?