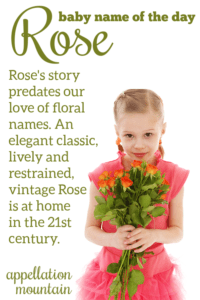 Rose feels like a timeless floral classic, an enduring choice that’s gaining in use once more. All true – and yet, there’s even more to this elegant name.

Thanks to Siva for suggesting our Baby Name of the Day.

One of the biggest surprises is that this name didn’t start out in the garden at all.

Instead, it come from the Germanic hrod – fame. Or possibly hros – horse. It depends on exactly which Ros- name you’re talking about. (And which source you’re reading.)

The Normans brought a whole cluster of the names to England – Rosamund and Rosalind, Rohese and so on. Some survive in nearly identical forms today; others have changed dramatically.

Born Isabel Flores de Olivia in 1586 Peru, the future Saint Rose of Lima took her name from a childhood nickname. Known for piety and good works, especially aid to the poor, she was declared a saint in 1671, making her the first person born in the Americas to be canonized. She wasn’t the first; a thirteenth century French saint bears the name. So do a handful of other saints, living from the 1700s onwards.

Canadian legend gives the name to Rose Latulipe, a young woman in The Legend of the Devil at the Dance. Miss Latulipe lived for the dance floor, and spent the night of Mardi Gras getting down with a handsome stranger. Only problem? The stranger is the devil himself. In some tellings, she’s never seen again after that night. Other authors send her to a convent.

When this name was revived in the nineteenth century, it became all about the flower. Victorians embraced names like Lily and Violet, so even if there was no history for this name, it surely would have caught on.

Women answered to the name in considerable numbers. It appeared in the US Top 1000 from 1880, straight through the 1950s. Along the way, fiction and history gave us:

As a surname, it can come from the first name, or sometimes from a house with a garden of roses. And, of course, it’s a color name, too – though precisely what color is difficult to say. The flowers come in dozens of shades, from pale peach to vivid red, buttery yellow to purest white.

Stuck in the Middle

The name left the US Top 100 in the mid-twentieth century.

But sometime around the late 90s, this became a go-to choice for girls, along with Grace – but in the middle spot. And why not? It balances out longer firsts, like Isabella and Olivia, anchors short modern choices, like Mia and Ava, and adds a feminine touch to twenty-first century favorites, like Mackenzie and Piper.

Plenty of girls probably had grandmothers – or maybe great-grandmothers – to honor with the middle. Other families likely chose it for elegance and simplicity.

In the Spotlight Again

At the same time all of those Olivia R.s and Lucy R.s were born, a generation of Rose names started to rise in use. Rosalie caught on; so did Rosemary.

But before long, the spare and lovely Rose also started to climb. In the year 2009, the name ranked a mere #350. It currently stands at #123, and could certainly climb higher still.

If timeless elegance combined with a certain feminine strength is your goal, Rose might belong on your list.

Would you consider this name for a daughter? Or do you prefer one of the longer forms of the name? 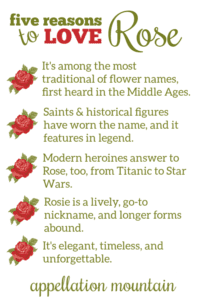