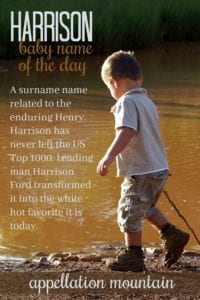 File Harrison with the boys’ names leaping up the popularity charts.

Our Baby Name of the Day was inspired by this post.

The Germanic Henry came to England with the Normans. In the Middle Ages, it became friendly, approachable Harry. And so Harrison simply means Harry’s son, just like Jackson and Jameson were given to the descendants of Jack and James.

That means the surname shares some of Henry’s meaning: home ruler. And the connection to such a traditional given name makes this one feel a little more rooted than some modern innovations.

Notable bearers of the surname abound, but let’s focus on just two families.

First there’s the 9th President of the United States, William Henry Harrison. We love a good White House surname, with names like Carter, Reagan, and Kennedy all very popular.

And his is a political family indeed. William Henry’s dad Benjamin is considered one of the Founding Fathers, a signer of the Declaration of Independence and a governor of Virginia. William Henry’s grandson, also named Benjamin, would become the 23rd President of the United States.

The 9th President is notable for sparking a constitutional crisis when he died of pneumonia barely a month into his term. His grandson occupies little space in history books, but perhaps that’s because he’s remembered most for a combination of personal integrity, early efforts to protect civil rights, and sound foreign policy. Or not – I’ve also read arguments that his presidency was just plain unremarkable, and he lost his re-election campaign to Grover Cleveland in a landslide.

Today most parents will probably think of a more current famous figure: musician George Harrison, one of the legendary Beatles. That makes this a rock and roll baby name, and, seen in that light, it’s significantly more popular than Lennon.

A handful of famous nineteenth century men answered to the surname as a first, including:

Factor in some politicians and other figures, and this name appears regularly in the historical record. In fact, it’s never left the US Top 1000.

As for Bergeron? He’s the title character in a Kurt Vonnegut short story, penned in 1961. At the time the name hovered in the 600s, familiar, but far from common.

And then came the man who would play so many iconic characters: Harrison Ford. Born in 1942, the name was relatively uncommon and doesn’t seem to connect to his family tree. Brother Terrence also has a lesser-used name, so I’m guessing it was just his parents’ style.

Ford’s career started small in the 1960s. Fun fact: Back in the 1910s and 20s, there was a Broadway star and silent film actor with the exact same name. By the 1980s, the second Ford would eclipse the first, thanks to star turns in the Star Wars and Indiana Jones franchises.

He’s also played Jack Ryan in adaptations of Tom Clancy’s novels; Rick Deckard in Blade Runner; and John book in Witness, for which he earned an Academy Award nomination.

It’s tough to hear the name and not think of one of the many iconic characters he’s played.

Harrison: By the Numbers

And yet, this isn’t Cher or Bono, a name synonymous with just one figure.

It hit a low point in the 1970s, almost leaving the rankings entirely. Ford deserves credit for much of the name’s revival. In 1977, the name stood at #971. By 1982, two years after Empire Strikes Back and one year after we met Indiana Jones in Raiders of the Lost Ark, the name had climbed to #603. It’s moved upwards nearly ever year since then.

While it still feels fresh, it’s also a name we hear more and more often. There are characters on The Flash and Scandal by the name; it’s appearing in more and more birth announcements.

Still, if you’re after a longer name for a son that feels contemporary without being invented, Harrison might hit exactly the right note.

Would you consider Harrison for a son? How popular do you think this name will become?