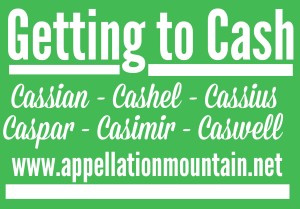 Cash is king, and he’s also on the rise as a given name, boosted by Johnny Cash and our affection for bold, brisk boy names.

But what if you have your doubts?

What if Cash might seem too cool, too maverick?  Your kiddo could turn out to be a bookworm, or possibly the student body president.  And is that lawless, man-in-black image really the easiest to wear for a grown-up?

But let’s say you want to play it safe.  No worries – formal name options abound.

And this works the other way, too – Cash can be the edgy, on-trend nickname that makes a more obscure name very wearable in 2014.

Read on for all of the possibilities …

Cashel – Cashel is an Irish place name, rarely heard as a given name.  But in our age of Dashiell and Gabriel and other ends-in-el names for boys, Cashel fits with current sounds.  Plus, Cashel is the Anglicized version of caiseal – castle, and the Rock of Cashel is the traditional seat of the Kings of Munster, and still home to some fantastic medieval buildings.

Casimir, Kasimir – Four kings of Poland have answered to this name, derived from the Slavic elements meaning “destroyer” and “great.”  It’s little heard in English, but could wear well, especially if you have Polish roots to honor.

Caspar, Casper, Kasper – Another name with a certain pan-European appeal, Caspar – or some version of the name – is in use in nearly every Western language.  In English, Jasper is the rising star, while Casper is the friendliest ghost you know.  Still, the Cas- lends himself to Cash as a short form, and Caspar is plenty familiar as a given name.

Caspian – He’s rather stylish these days, with his ties to the sea and the fictional character.  But if Caspian turns out to be too romantic for your son, Cash could be a wearable nickname with a totally different feel.

Cassian – The name of a third century saint, a fourth century saint, and then Saint John Cassian, who came a long just a tiny bit later and was known for introducing an Egyptian-style monasticism and mysticism to early medieval Europe.  But no one is using the name nowadays, which makes him a really interesting possibility in 2014.

Cassius – As in Clay, the birth name of the boxer who later became known as Muhammed Ali.  The original Cassius Clay was a nineteenth century Kentucky planter who became an abolitionist.  Cassius is on an upswing these days, one of several ancient names being rediscovered by parents.

Caswell – I went looking for surnames that might lend themselves to Cash, and there are fewer than I guessed.  It’s originally a place name from Old English, referring to water.

Charles – Charles is such a tremendous classic.  I’ve heard dozens of possible nicknames for him: Huck, Chase, Arlo.  Would Cash be a reasonable short form to spark up this venerable appellation?  It’s a stretch, but maybe not a crazy one.

Nicasio – Another rarity, this one borrowed from a California place name, but also the given name of an Argentine politician.

Another possibility?  A smoosh of any C name with any Ash- name:

What are your favorite ways to get to Cash?  Is it a name you would consider, as a stand-alone or as a nickname?  Have I overlooked any possible formal names for Cash?