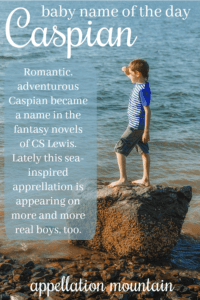 Our Baby Name of the Day could be the next big thing.

Located between Russia and Iran, the Caspian is an inland sea, or maybe the world’s largest lake.  You’ve probably never heard of the major cities surrounding it: Sumqayit, Azerbaijan, anyone? Babolsar, Iran? Only the most intrepid of travelers has visited the region.

Once part of the Paratethys – an ocean that predates the current alignment of our continents – it makes for some curiosities. There’s a species of seal found only in this sea, and Sabayil Castle, submerged for five centuries following an earthquake in 1306, until the water receded.  Beluga sturgeon swim in its waters, the source of the world’s priciest caviar.

The name comes from an ancient tribe living on the neighboring shores. The Greek historian Herodotus mentioned them by name in the fifth century BC. Some sources suggest it means white, but that’s far from certain. The Iranian city of Qazvin may come from the same root.

The place name took on a different kind of meaning when C.S. Lewis borrowed it for a character in his series, The Chronicles of Narnia.

Published in 1951, it tells of the further adventures of the Pevensie children. Peter, Susan, Edmund, and Lucy must return to Narnia to help Caspian save his throne from his evil uncle Miraz.

Lewis chose other names from the atlas, including Narnia. It came from Narni, an Italian city.

As for the prince, he’s handsome and noble. The rightful heir to the throne, he wages war against his corrupt uncle, with the help of the Pevensies. He becomes King Caspian X.

The new king’s adventure continue in three more books in the series.

Caspian: By the Numbers

As names go, this one is quite new.

1998 marks the first year enough children received the name for it to register in the US Social Security Administration data, with nine boys born.

That might be down to a character in Highlander: The Series, a 1990s Canadian-French fantasy adventure series, inspired by a 1986 movie.

By 2008, that number reached just 33 – still very small. That’s the year Ben Barnes played the prince in the Chronicles of Narnia movie based on the book Prince Caspian. It might have been enough to push the name into wider use. Barnes reprised the role in 2010’s The Voyage of the Dawn Treader, but by 2011, there were still just 39 boys given the name.

There’s also Jessica Verday’s bestselling young adult series The Hollow. It re-tells the Sleepy Hollow story, and gives us a mysterious character by the name.

Child actor Caspian Diament has made an appearance on This is Us.

I suspect credit for Caspian’s rise goes to the name itself, more than any other factor. Consider:

While this name is attracting more attention, it remains just under the radar, a great fits-in/stands-out choice for a son.

What do you think of Caspian? Can you imagine it catching on?