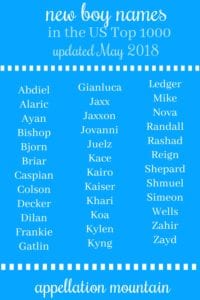 New boy names 2018 tend towards the masculine this year. Plenty of these turn it up to eleven! Others feel inventive, imported, or just plain new. And a few might be future classics.

In May 2018, the US Social Security Administration released the new popularity data for all children born between January 1st and December 31st of 2017. 37 boys’ names ranked in the US Top 1000 that did not appear in the prior year.

How does this compare to prior years?

It took 202 recorded births for a name to make the boys’ Top 1000 list, though Howard and Jaxx both squeaked on with just 201 births.

Kaiser might make some parents thing roll, but it’s another form of caesar. Like czar, it became a title, in this case used in German-speaking countries. Teen Mom alum Jenelle Evans chose the regal name for her son in 2014. Along the same lines, Kyng – with a ‘y’ – also debuted in the rankings.

Reign, the name of Kourtney Kardashian’s youngest son, also made the boys’ list this year. It previously charted in the US Top 1000 for girls.

Speaking of Reign, more and more names seem to appeal across traditional gender lines. While that’s not entirely novel, it does seem like younger parents choose names they love – regardless of whether they’re expecting a boy or a girl.

Other names that fit this mold include Nova, rising fast for girls but also gaining for boys; Briar, which is doing well for both; and Khari, which looks like a creative twist on Carrie, but seems slightly more favored by the boys.

Speaking of Khari, a number of names feel like inventions or just plain re-spellings.

Jaxx and Jaxxon both take Jackson – and Jaxon and Jaxson – and double the ‘x’ factor for a name that’s as extreme as a Vin Diesel action movie.

Kylen mashes up Kyle and Dylan; Kace makes a spin on Case and Chase. And while we’re talking about Ks, there’s also not-quite-place name Kairo. Juelz, a re-spelling of Jules, probably owes something to a rapper by the same name.

And then there’s Dilan, a Spanish and Portuguese spin on Dylan; and Jovanni, an Italian-ish boys’ name based on Giovanni, the Italian form of John.

At long last, the Hawaiian nature name Koa – it’s the name of a tree – also debuted.

There’s also the Arabic Rashad, Zahir, and Zayd, and the Sanskrit Ayan. Bjorn, a traditional Scandinavian name meaning bear, also made the Top 1000 this year.

Abdiel means “servant of God.” He’s a minor character in the Old Testament, but Milton gave him a bigger role in Paradise Lost.

At the other end of the alphabet, there’s Yadiel. It’s the Spanish version of another name with Hebrew roots, Jehudiel.

Lastly, there’s Shmuel, the Hebrew form of Samuel. While Yadiel and Abdiel seem accessible for a wider audience, my guess is that Shmuel is almost always a choice informed by religion.

A few old names always feel fresh and new again. But are we ready for babies named Randall? The 1950s favorite had just barely left the US rankings, and now it’s back again. Maybe that’s less of a signal that Randall is ready for a comeback, and more a reality of ranking just on the edge of the Top 1000.

Once surname names were reserved for family members, a way to honor a grandparent or hand down a mother’s maiden name. Now it’s all about style, an ideal way to find a familiar name that your child won’t share with many others his age.

Decker and Wells fit this pattern. So does Shepard, which follows alternate spelling Shepherd on to the list. And Colson joins lots of other Cole names, like Colton and Colby. Gatlin also started out in the surname spot, though perhaps it’s most akin to another recent arrival on the list, Remington, since a gatling gun was an early machine gun.

Bishop feels like a title, but might have been worn by a servant in the bishop’s household, or earned as a nickname other ways. And Ledger seems most likely a nod to the late actor Heath Ledger.

Even within this category there are differences. Decker feels like a tough guy name – even though it’s just an occupational surname, once given to roofers. Shepard strikes me as gentler, more of a spiritual choice, though again, it’s simply a last name once given to those who tended a flock.

One of my favorites names to make the new list is Caspian, part-place name, part-literary choice. There’s also Simeon, which owes something to Simon, and maybe a little more to Julian. Both fit right in with current favorites for boys, like the long, romantic Sebastian and Adrian.

Alaric owes its rise to a character in the popular CW series The Vampire Diaries, but also fits nicely with parents’ growing preference for longer names.

That’s it for the new boy names 2018. Are any of your favorites on this list?