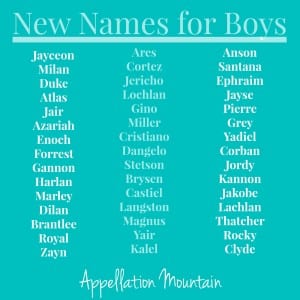 Some were novel spins on traditional names, or brand new names making their debuts. Others returned after a long absence.

New Names for Boys: 45 Names Debuting or Returning in 2013

Retro Revival – Welcome back, Clyde! Nice to see ya, Harlan! Names constantly cycle in and out of favor. After a long hibernation, Clyde and Harlan are ready for a comeback.

Surnames – Once most kids with a surname name were probably named after a family member or someone the parents admired. Now, surnames are mainstream, and there’s no need to say “We named him after my grandmother’s maiden name/our favorite poet/a dear friend.” Still, some of the surname names on this list feel literary (Langston) or musical (Santana) or even just plain Western (Stetson). Something that strikes me as particularly interesting: gone are the days when every surname name was English. Sure, there’s Miller and Thatcher. But there’s also Cortez.

Tough Guys – Speaking of Stetsons, there are some tough guy names on this list, like Rocky and Kannon.

Pop Culture – Another surname name on the rise is the musical Marley, as in Bob. Jayceon, too, comes from a famous musician. Castiel may seem like another Biblical borrowing, but this name gets its boost from the CW’s smash hit series Supernatural. And can Kalel really be inspired by the Man of Steel?

Alt Spellings – Popular names tend to inspire alternative spellings. Brantley charted at #139, and Brantlee debuted at #884. Bryson came in at #102, and Brysen at #952. Corban, Jayse, Dangelo, and Jakobe are four more.

Imports – Gone are the days when parents worked to find “American” names for their kiddos. In 2013, Cristiano, Lachlan and Lochlan, Magnus, Yadiel, Pierre, and Gino all charted in 2013. Zayn is, of course, a pop culture name thanks to One Direction’s Zayn Malik. And it might feel like an alt spelling of Zane. But it’s also an Arabic name meaning grace.

Biblical – Biblical names are well-represented in the most popular names of all time, but there’s a heightened awareness of their style factor in recent years. Enoch and Ephraim re-entered the US Top 1000 as parents continued to look for wearable choices that aren’t in the current Top 100. Other returns include Jair and Yair, though they’ve both ranked recently. Azariah is another Old Testament choice in the key of Elijah and Isaiah, debuting in the US Top 1000 for the first time in 2013.

From the Map – Place names have been very much in vogue in recent years. Place name Jericho fits this trend, but it’s also an Old Testament place name. Shakira welcomed son Milan in January 2013, so that might explain some of his popularity, but it’s also a storied Italian city.

From Myth – Remember when Anne Heche named her son Atlas in 2009, and everyone raised an eyebrow? Now Atlas is a fast-rising favorite. Another mythological moniker on the upswing? Ares

Nature Names – Is Forrest the new River? It’s a got a preppy surname vibe, too, so Forrest feels like it could go far.

Visions of Grandeur – What to do with this trend? In some ways, it isn’t new. Royal ranked #896 in 2013, but Royal had also charted from the nineteenth century into the 1970s. Duke wasn’t ever quite as popular, but the #718 name from 2013 also has a history of use long before anyone ever heard of the Kardashians.