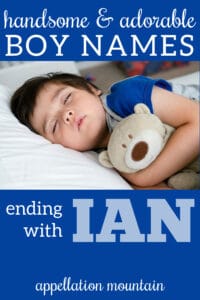 Boy names ending in IAN once were rare. Today? They’re near the very top of the popularity charts, and a whole new group of ends-with-IAN choices are on the rise..

In the 1990s, things started to change. By 2012, six boy names ending in IAN ranked in the US Top 100, including Ian. Besides that vowel-intensive Scottish form of John, the other five were Christian, Adrian, Julian, Sebastian, and Damian.

The sound fits with our growing preference for boys’ names that are longer (or shorter) than two syllables. Choices like Sebastian manage to be less expected than Aiden or Mason but not too out there, either.

Of course, not all boy names ending in INA share the same spelling or sound.

Christian and Sebastian take a shan or chan ending, while many others sound like Ian – two syllables.

The French ien spelling is another variation, seen in Julien and Lucien. There’s also eon, as in Gideon. Spellings like ean, yon, and even yan can all result in the same sound.

Regardless of the spelling, the ian names offer an interesting sound – rooted, with a long history of use, but very current and twenty-first century vibe, too.

Read on for some of the best boy names ending in IAN.

Saints and popes have answered to Adrian. It briefly charted for girls, too, after Talia Shire starred as Mrs. Balboa in the Rocky film franchise. But Adrian has ranked among the 100 Top Names for boys since 1990, making this one of the first -IAN names to really catch on.

With multiple origins and meanings, Arian could be borrowed from Greek myth or the Latin zodiac sign Aries. It might be Persian. And possible meanings range from holy to noble to warrior – to list just a few. While Aryan ranks in the US Top 1000, it’s worth noting that this spelling is also used to refer to racist theories embraced and espoused by Hitler, making it potentially problematic. Other spellings, like Arion, are also seen.

From a Sanskrit word meaning path.

Another possible spelling of Brian, used primarily by Spanish-speaking families.

Irish king Brian Boru reigned in the late 900s and early 1000s, fending off Viking invasions and unifying control in fragmented Ireland. Rediscovered in early twentieth century America, Brian went on to become a Top Ten favorite during the 1970s. Spelling Bryan – often the surname version of the name – followed.

C.S. Lewis‘ Prince Caspian shares his name with a sea in The Chronicles of Narnia. It’s slowly risen in use, entering the US Top 1000 in 2017.

Cassian Andor is a character in the Star Wars universe, with a new television series debuting on Disney+ in late 2022. Accordingly, this once rare name, borrowed from ancient Rome, debuted in the US Top 1000 in 2021.

To some, Christian might be an expression of faith. But with a long history of use, it’s seen as a classic name for a son – briefer than Christopher, and perhaps slightly more current, too.

Another name belonging to an early saint, Damian also brings to mind the terrifying child at the heart of horror movie classic The Omen. The character’s name is spelled Damien. As recently as 2016, the character featured in an A&E television series titled Damien. Despite the dark pop culture tie-in, Damian has been a Top 200 choice in the US for all of the twenty-first century.

First appearing in the US Top 1000 back in the 1960s, the age of Darren, Darien is likely a spin on that once-trendy name. There’s also Darien, as in the town in Connecticut. In a bid to find a distinctive name, locals took the suggestion of a sailor and named it for the Isthmus of Darien. It separate the Pacific from the Caribbean, and is better known today as the Isthmus of Panama.

Probably a mix of David and Darian, this name has been rising in use since the 1970s.

Oscar Wilde gave the name Dorian Gray to a superficial young man who sold his soul for eternal youth. The Dorians were an ethnic group in ancient Greece. While the name clearly has a Greek origin, the meaning is uncertain. Chances are it comes from doron – gift, just like Theodore and Dorothy.

At the beginning of the twenty-first century, six-year-old Elian Gonzalez was rescued along with other Cuban refugees headed for Miami. His mother perished in the escape attempt. Left behind in Cuba, his father demanded Elian’s return. The legal proceedings dominated headlines for months, and the baby name Elian rocketed in the US Top 1000 in the year 2000. Elian might be a variant of Elias and Elijah, but in the child’s case, it was a combination of his parents’ names – Elizabeth and Juan.

Roman general Fabius and Pope Fabian appear in the ancient world. Their name comes from faba – bean. In the late 1950s, Fabiano Forte dropped most of his name to become teen idol Fabian, transitioning from pop songs to movies in the early 1960s. It’s been a Top 500 choice for boys born in the US since the 1970s, never really catching on, but consistently in use.

A smooth, slimmed down compromise between the English John and the Italian Gianni, Gian is a newcomer to the US Top 1000.

An Old Testament name, Gideon fits right in with popular favorites like Noah and Isaac. Relatively few boys’ names from the Bible end with IAN, but the sound surely makes Gideon even more appealing.

Chances are most parents see this as a gussied-up spelling of two-syllable Jason. But it’s tempting to read it jay-see-ahn, isn’t it?

A strong classic of a name, Julian is straight out of the ancient world, but perfectly at-home in the twenty-first century.

A borrowing from Irish myth, it sounds like Ian with a K sound in front. If you’re disappointed that everyone else is using Aiden, Cian makes for a distinctive alternative. Spellings like Keon and Kyon are seen, too. There’s also the Hindi Kiaan, which sounds just the same, but carries the powerful meaning “grace of God.”

A Leo name that’s been popular in Europe in recent years, and is gaining in the US, too.

Lian looks like Liam-with-an-N, or maybe the last two syllables of Julian or Adrian. But it’s also an international name in its own right, with possible roots in Chinese and Hebrew, to name just two.

Luke is among the most popular of Biblical boy names. Lucian and Lucien transform the name, trading a hard K for a soft C. It’s sophisticated and storied, a Luke name that’s just a little different.

One of many Max names, elaborate and commanding Maximilian has been heard on commanders and kings. But it also shortens to friendly Max, so this IAN-ender is a real shapeshifter of a name.

A night sky name that everybody recognizes, Orion is the hunter of Greek myth.

Also spelled Rayyan, this Arabic name is associated with paradise.

Ryan followed Brian and Kevin in popularity and preceded Aiden, an Irish name that dominated the 1980s.

When The Little Mermaid introduced a red crab called Sebastian back in 1989, the name was fairly uncommon. But those days are long gone. Sebastian has been a Top 100 pick since the year 2000.

A Biblical place name, Zion is a synonym for Jerusalem, or even all of Israeli.. The name’s exact origins are debated, but it’s broadly meaningful across several belief systems. While there is a Mount Zion in modern-day Israel, it’s not the same location as the ​original.

Golden Aurelia is trending for girls, so why not Aurelius and Aurelian? Fun fact: an Aurelian Society was an old-school term for a group of butterfly enthusiasts, a reference to golden hue of the chrysalis right before a butterfly emerges.

If Alexander leads to Xander and William to Liam, then Sebastian’s Bastian should wear every bit as well. The Neverending Story gave us the unforgettably named Bastian Balthazar Bux.

Campion means champion, but it’s probably in sparing use thanks to Saint Edmund Campion, a priest who died for his faith during Queen Elizabeth I’s reign.

Like Cleo, Cleon means glory. And just like Cleo – and Leon – this name could wear well today.

Crispin is very rare indeed. This Crispin variant is even less common.

A Roman family name, Cyprian first referred to someone from the island of Cyprus.

Another name borrowed from the map, Dacia once referred to a region now found in modern-day Moldova and Romania.

Dash and Dashiell meet all of the boy names ending in IAN.

Originally from the ancient god Dionysus, he of wine, women, and song, these shorter names feel quite modern. Grandparents might think of 1950s pop sensation Dion. (You’ve probably heard “The Wanderer” or “Runaround Sue” at some point, too.) NFL Hall of Famer Deion Sanders is a more recent notable.

A rare cousin to Emil and Emiliano.

With one ‘n’ or two, Finnian has great potential. An Irish saint’s name, it’s made even more accessible by friendly nickname Finn.

We love Grace for our daughters. Gratian is the rare masculine equivalent.

An uncommon ancient name, Florian comes from the Latin flos – flower. Like Flora and Florence, it’s a name that suggests a garden in full flourish.

Justin had a good run, but add the -IAN, and this name transforms into an IAN-ending name. During the sixth century, Byzantine emperor Justinian did his best to bring back the Roman Empire.

Yet another ancient name, this time related to the number eight. It’s a name with serious historical oomph. The first-ever emperor of Rome is known as Augustus, but he was born Gaius Octavius.

Eighteenth century Scottish writer James Macpherson claimed he translated older works; chances are that the Ossian cycle of epic poems was actually Macpherson’s creation. Either way, he put this name on parents’ list of options.

Legendary dancer Savion Glover put his distinctive name in the spotlight. In fact, Savion the name peaked in 2002 when his Tony Award-nominated Bring in ‘Da Noise, Bring in ‘Da Funk musical was on national tour.

A more elaborate form of Simon, always less popular than the two-syllable alternative.

It’s possible Torian was invented, based on Torrance and Terrence and Dorian. But it’s also possible that this is one of several uncommon IAN surnames. Torian could easily come from the Italian Toriano.

A modern take on tragic Tristan.

Another ancient name, worn by an emperor and a handful of saints, with a powerful meaning: to be strong.

What are your favorite boy names ending in IAN? 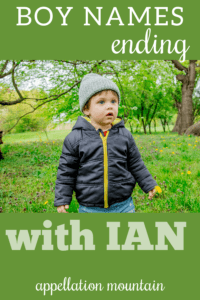