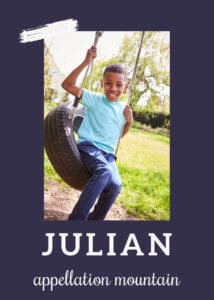 The baby name Julian spent years under the radar, but today it belongs with the the established Top 100 for boys.

The truly old school Julius traces its roots all the way back to ancient Rome.

Gaius Julius Caesar conquered Gaul, crossed the Rubicon, and convinced the Roman Republic to vote him “dictator for life.” He met his death at the hands of rebellious senators, but ultimately, Caesar brought about the Roman Empire.

His patrician family claimed descent from Julus, son of Trojan war hero Aeneas, who was the son of the goddess Venus. They’d been powerful for generations, and other family members answered to Julius and Julia in the ancient world.

It could also connect to the god Jupiter, via the term Jovilios.

More famous Romans followed. Along the way, the name morphed from Julius to Julian.

By 361, the emperor of the Roman Empire answered to Julian. We often refer to him as “the Apostate” because he was the last non-Christian ruler, and pursued attempts to reinstate traditional Roman religious practices.

The early Julians we remember best, though, are considered saints.

Among the most famous – and perhaps only legendary – is Saint Julian the Hospitaller. It was wildly popular in the Middle Ages, and re-told by others, including Flaubert.

It’s said that witches cursed the newborn Julian, foretelling that he would one day murder his parents. Julian’s dad suggested that get rid of the infant, but his mother refused. Years later, he met a stag in the forest, and the stag revealed Julian’s dreadful fate. Rather than give in, Julian left home, settling in Galicia where he married a wealthy widow.

Years later, Julian’s parents come after him. Sure enough, they find his wife while Julian is out hunting. Their daughter-in-law encourages them to rest, giving up the master bedroom for her newly discovered in-laws’ comfort.

And this is where the story gets really dark.

Another hunter sees a couple in Julian’s bed, and reports to Julian that his wife has been unfaithful. In a rage, Julian rushes home and kills both sleeping figures … only to discover his wife, alive and well, sitting in the village, eager to share her good news about his parents’ arrival.

To atone for his sins, Julian used his wealth to build hospitals. He’s also considered the patron saint of travels seeking safe lodging.

True or not, it’s helped the name endure across centuries.

A popular saint tends to make for a classic name, and the baby name Julian is one.

Jolyan and Jolyon developed in medieval English. John Galsworthy used the latter spelling for four characters in The Forsyte Saga, set from the 1870s into 1920. They use nicknames, Jo, Jolly, and Jon.

But beyond fiction, plenty of real life men have answered to the name.

Civil rights activist Julian Bond served as chairman of the NAACP for a dozen years.

And, of course, The Beatles’ song “Hey Jude” was written for John Lennon’s eldest son, Julian. The lyrics were changed from “Hey Jules” to “Jude” during the songwriting process.

There are dozens more – actors and athletes, the celebrated and the infamous. But that’s the strength of a classic name.

Despite all of this history, the baby name Julian remained relatively uncommon in the US. It mostly ranked in the 200s and 300s, briefly dipping into the Top 200 in the 1920s.

But then it started to gain, rising in use from the 1980s onward.

Maybe our affection for J names like Jason, bolstered the baby name Julian, too.

Or maybe feminine form Julia entering the Top 100 in the 80s encouraged the use of Julian for boys.

It fits with longer names for boys, like Oliver and Sebastian.

There’s something charming about Julian. It’s a handsome name with ancient roots, very much at home in the twenty-first century.

Would you consider the baby name Julian for a son?