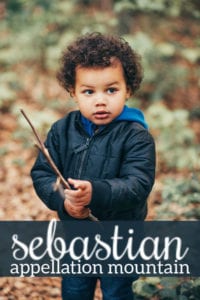 Sebastian brings to mind a king, a composer, an indie pop darling, a favorite saint, and an animated crab.

Sebaste means venerable in Greek. It equates to the Latin Augustus – as in the title of Roman emperors turned given name.

In the ancient world, it served as a place name. The most prominent Sebaste stood on the Black Sea, in Asia Minor.

The name Sebastianus evolved to mean someone from Sebaste. It grew from there.

The name owes much of its popularity to a third century martyr.

It’s said he was a Roman soldier, known for his bravery – and his faith. Christianity was illegal by order of Emperor Dicoletian. Sebastian was discovered, and ordered to face a firing squad of archers. Try as they might, the archers failed to pierce him with their arrows. Legend tells us that Saint Irene nursed him back to health following his ordeal. Once recovered, Sebastian appeared in public to confront the Emperor. This time, he was beaten to death with cudgels.

The gory story appealed to the artists over the centuries. Sebastian is patron saint of soldiers, as well as athletes. His extraordinary physical and spiritual endurance have inspired generations.

There’s a fifth century ruler of Gaul by the name.

A sixteenth century king of Portugal answered to the name, too. While it was unusual for royalty, the future king was born on the saint’s feast day. He became king at the age of three and died in battle at just 24.

There’s a long-standing legend that he’ll return to save Portugal at its hour of need. Donizetti even wrote an 1843 opera about the ill-fated young ruler.

The name continues to appear in literature and music across the centuries.

Besides the opera, there was:

The name continues to appear in small ways, and the numbers reflect it in the US. It skittered on the edges of the US Top 1000 in the nineteenth century. During the early 1900s, it appeared around the 500 mark, but slowly fell. By 1950, it left the rankings again.

UNDER THE SEA AND INTO THE MAINSTREAM

And then everything changed.

First came one of the most famous bearers of the name: Horatio Thelonius Ignatius Crustaceous Sebastian, known mostly by his final name. We met him in 1989’s The Little Mermaid. The movie was a smash hit, ushering in the Disney Renaissance. “Under the Sea,” the song where Sebastian details the appeal of their oceanic life, even won an Academy Award for Best Original Song.

The name surged nearly 100 places on the popularity charts between 1989 and 1990, suggesting that an animated crab could make us take a fresh look at a traditional boy name.

But pop culture embraced the name.

Also in 1989, the world met Skid Row, a glam metal band fronted by Sebastian Bach – born Bierk. The hair metal rockers enjoyed wild success over the next few years. Bach went solo in the 90s, and eventually took up acting. He appeared on Broadway and Gilmore Girls, among other projects.

Indie band Belle and Sebastian formed in Glasgow in 1994. Their name was inspired by a French children’s book from the 1960s.

And in 1999, teen drama Cruel Intentions became a surprise hit. Inspired by Dangerous Liaisons, it borrowed many names from the characters, including Sebastian – played by Ryan Phillippe.

Once rare, by the 1990s, Sebastian was quickly becoming a name you couldn’t avoid.

It wasn’t just in the US, either. While it was long more popular in other languages, Sebastian would reach the Top 100 in Italy and Poland, Chile and Denmark, and a dozen other countries.

Characters from television hit Glee, royal drama Reign, and YA series The Mortal Instruments answered to the name. Plenty of celebrities used it for their sons, including Lin-Manuel Miranda. Actor Sebastian Stan joined the Avengers as Captain America’s sometimes-BFF and sometimes-mortal enemy, Bucky Barnes.

As of 2018, the name reached #18 – an all-time high in the US. It’s especially popular with parents seeking an English-Spanish crossover possibility.

But this classic works for families for lots of reasons. While it’s often used in full, no nickname required, possibilities range from Bastian to Seb to Bash to Ian.

The only question now is how high will this traditional choice climb?

Do you think Sebastian will rank in the US Top Ten in the next few years? 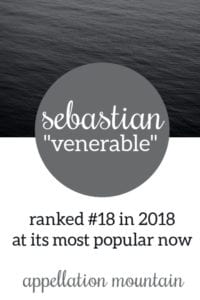