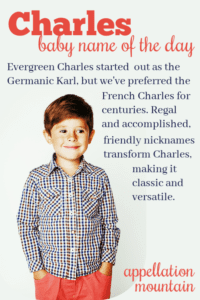 Count Charles among the most evergreen of classics.

Thanks to Alicia and Melissa for suggesting our Baby Name of the Day.

Tally up the ten kings of France, four kings of Spain, two kings of England, one king of Portugal and Hungary each, as well as a host of powerful aristocrats, Holy Roman Emperors, and Charlemagne himself, and it’s easy to see this name as blue-blooded through and through.

Add in a half-dozen saints or more, and this name appears in nearly any history book.

But we’re just getting started …

Famous men by the name abound, including:

In fact, if I added in Carlo, Carlos, Karol, and all of the name’s international variations, this post would easily quadruple in length.

While there are a few competing theories, most agree that the name comes from the Germanic Karl, meaning man, or free man.

Way back in the early 700s, Charles Martel led the Franks, fending off a Muslim invasion. His grandson shared his  name, along with the epithet Magnus – Charlemagne, or Charles the Great. While Martel wasn’t the first Carl by any means, he and his grandson put Charles on our radar. Charlemagne was wildly famous, known throughout Europe, and almost certainly the reason the name entered into wider use.

It arrived in England when Mary, Queen of Scots – raised at the French court – gave it to her son James as a middle name in 1566. It’s been in use among English royals ever since, including the current Prince of Wales.

All of this makes the name feel quite elevated and grand. But nickname Charlie? It’s as friendly and accessible as you can get, a go-to name for storybook boys, including:

Of course, other possible nicknames abound for this traditional name, from Chuck to Chaz to maybe even Chase, and more.

And Charlie isn’t just a diminutive, either. It’s the most popular form of the name in much of the English-speaking world.

Charles: By the Numbers

Even classics rise and fall. From 1880 through the 1950s, this name appeared in the US Top Ten, falling behind only names like John and James. In fact, it’s never left the US Top 100. That puts Charles squarely among the most traditional of boy names.

Still, it did decline in use, leaving the Top 50 at the beginning of the twenty-first century, and hitting a low of #63 by 2010.

That’s the strength of this name: a rock-solid traditional choice with upbeat, appealing short forms. If you’re looking for a classic name for a son that will endure over time and adapt from childhood well into adulthood, you can’t go wrong with Charles.

Would you consider this name for a son? What’s your favorite short form?

First published on March 17, 2010, this post was revised substantially and re-posted on