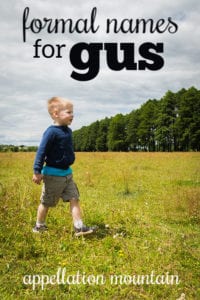 Looking for formal names for Gus?

Over a dozen options lead to this short, friendly name.

Of course, you might just name your son Gus and skip the formal version. It ranked in the US Top 200 as an independent name in the nineteenth century; it’s climbing in use again, currently ranked #994 out of 1000.

That’s just common enough that you might find a just-Gus on your family tree, hanging out with Great Aunt Esther and your third-cousin-twice-removed, Mabel.

But if you’re more of a formal name fan? Possibilities abound. Most of these lean traditional, but they range from the names you’d hear in any kindergarten to the truly rare.

Here are the best formal names for Gus.

Just like the month, and playwright August Wilson. A trio of Polish kings were also August.

Saintly, scholarly, and elaborate. It’s easy to imagine wanting something a little cuddlier for a baby Augustine, and Gus is a great go-to.

All forms of the name used in various romance languages. Writer Augusten Burroughs gives the first spelling some literary flair. The last is the Spanish spelling, but it doesn’t make the US Top 1000.

Imperial Augustus sounds quite grand. As with Augustine, there’s no surprise parents mind find themselves dropping a few syllables from this majestic name.

GUS AT THE END

It’s tough to come up with a boy’s name that is simple, straightforward and not in the US Top 1000. Angus fits the bill – and leads to the nickname Gus.

It’s a bit more daring than Angus, but might work for an adventurous parenting pair.

Actor Will Ferrell named a son Magnus, probably thanks to his wife’s Swedish heritage. It comes from a Latin name meaning “great.” While g-u-s isn’t exactly present in the name, it fits with formal names for Gus.

If you’re a jazz fan, naming your child after jazz musician and activist Charles Mingus might appeal.

It sounds like a stretch, but Gus has served as a traditional nickname for Constantine. That’s because Constantine is Greek, and the sounds are different. In English, K and G are distinct; that’s less true in Greek. And so immigrants heard Gus as a natural shortening for Constantine … and it stuck. (No guarantee that it’s considered especially current among Greek-Americans or in Greece right now.)

With names like Cameron, Harrison, and Sullivan so stylish, you might expect Ferguson to have a place on the formal names for Gus list. Except the 2014 Ferguson Unrest (or Uprising) seems very current. (It wasn’t a consideration when this list was drafted in 2008.) On the one hand, it’s a familiar surname and fits with plenty of favorites. On the other hand, the reference feels charged. Still, the sound is great and naturally leads to Gus.

Everyone recognizes Gustav, but few people consider it for their sons. There’s something theatrical about this choice, and it might be tougher to wear than Augustus or Angus. But it’s tough to overlook a name that goes all the way back to Old Norse and has been worn by six kings of Sweden.

Sometimes listed as a short form of Augustin – or possibly a nickname for Gustav, too – it’s easy to imagine parents inventing Gustin (or Guston?) to add to the list of formal names for Gus.

Okay, not really. But pioneering astronaut Gus Grissom was born Virgil Ivan. A nickname from his surname – Griss – became Gus. That’s not an option for your average kid necessarily. And yet, Gus feels a little bit like Buddy, Sonny, or Mack – the kind of name that can be short for almost anything.

What are your favorite formal names for getting to Gus? 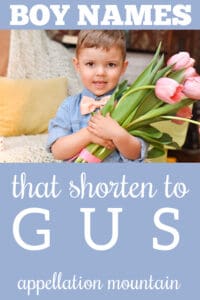 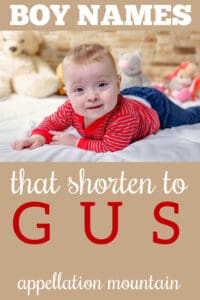