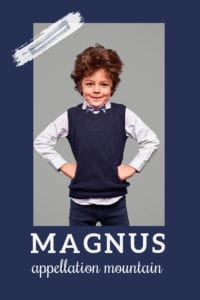 The baby name Magnus combines a grand meaning with a cool, current sound.

Thanks to Natalie for suggesting our Baby Name of the Day, and to Sarah for requesting the update.

The Latin magnus means great. We know the meaning through words like magnate and magnificent. When we magnify something, we make it bigger.

It may have become a personal name, in part, through a misunderstanding.

There are two versions of the story. In the first, the future king of Norway was born weak, sometime around the year 1024. Few expected him to survive. The name Magnus was borrowed from Carolus Magnus – Charlemagne.

Many years later, that boy – born the illegitimate son of King Olaf, succeeded to the crown against the odds.

The other version of the tale says that the eleven year-old boy king sought an appropriate name to take as king. He settled on Magnus, again, inspired by Charlemagne.

Either way, the misunderstood Latin phrase filtered into use as a given name amongst European – and especially Scandinavian – royals and nobles. The current crown prince of Norway is Haakon Magnus; Haakon’s youngest child is Sverre Magnus.

And yet, long before that unlikely eleventh century king ascended his throne, several saints Magnus were recorded. There’s a Saint Magnus of Anagni all the way back in the second century. A second Italian Saint Magnus comes along a century later. More follow, including in what we today call France, Germany, and Scotland.

So it seems like the baby name Magnus started out as Late Latin, become a title in the era of Charles the Great, and eventually made its way back to given name status.

It’s worth noting that the Scandinavian Magni also predates Magnus. It means strength or might. In Norse mythology, Magni was Thor’s son. And yes, he shows up in Marvel Comics – though not the movies. (At least not yet.)

Thor’s son and all those royals help explain why the baby name Magnus feels distinctively Scandinavian.

Surnames Magnusson and Magnussen are heard through Sweden, Norway, and much of northern European. Magnus, too.

In physics, the Magnus Effect describes the spin on a ball in a sporting event – think golf balls and tennis balls. It’s named after German scientist Heinrich Magnus.

The baby name Magnus ranks in the current Norwegian and Danish Top 20s, too.

A few high profile figures have given the name to their children, like actor Will Ferrell and his Swedish wife, Viveca Paulin. Their boys are Magnus, Mattias, and Axel.

If the baby name Magnus feels like a staple in much of Scandinavia, how has it fared in the US?

For much of the twentieth century, the baby name Magnus remained rare – if not quite unknown. As of 1999, just 48 boys received the name – an all-time high.

But it has climbed slowly in recent years. A male Magnus – nicknamed Maggie – appeared in 2005 Will Smith flick Hitch. YA series The Mortal Instruments gives us a warlock named Magnus Bane. And Rick Riordan, known as the creator of the long-running Percy Jackson series, is also the author of a series about the son of a Norse god. His name? Magnus Chase.

It makes sense. Magnus sits the intersection of so many trends: ancient names for our sons like Orion, big and bold ones like Maverick, and s-enders like Atticus and Wells. It’s also a potential formal name for Gus, just like current favorite August.

With history to spare and a strong meaning, the baby name Magnus feels like the best of several categories of name. It’s historic, heroic, and yet perfectly wearable, too.

What do you think of the baby name Magnus?

First published August 26, 2008, this post was revised substantially and re-published on February 18, 2021. 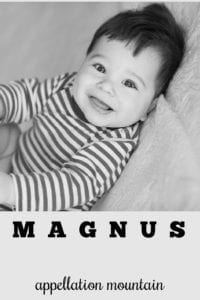