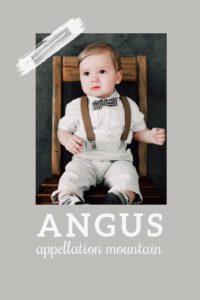 Thanks to Nessa and Emmeline for suggesting our Baby Name of the Day.

The Irish god of love and youth, Angus is sometimes referred to as the Celtic Cupid.

But this god was more man than cherub, free of wings or arrows.

He was the son of the Dagda, a powerful father-figure king in Irish myth, and Boand, a goddess associated with rivers.

Depending on the source, Aengus is associated with youth, music, poetry and yes, love.

He was also said to be quite handsome – something of a mash-up between Cupid and Apollo.

The Irish god’s name is often spelled Aengus. Óenghus, Aenghus and Aonghus all appear in the historical record, too.

A handful of ancient – and, in some cases, probably legendary – kings answered to the name. So did the ninth century Saint Angus the Culdee. He tried to live as a hermit, but when the faithful kept seeking him out, he retired to a monastery where he co-wrote one of the earliest accounts of the Irish martyrs.

The baby name Angus remains in use across the centuries, given to children generation after generation.

There’s a minor character by the name in Shakespeare’s MacBeth.

With all those famous men answering to Angus, it’s no surprise that we find the name on the map.

The cattle associated with County Angus is now known as Angus cattle, and so you can probably find certified Angus beef in your grocery store.

Despite the association, we continue to recognize the baby name Angus as a long-standing choice for a child.

So what does this name mean?

Scholars disagree, but most sources list it as “one strength.”

One of the reasons the baby name Angus seems so appealing today? It’s not just the history or the meaning.

The baby name Angus shortens naturally to Gus, putting it in the company of favorites like August.

Pop culture has been kind to the baby name Angus in recent years.

AC/DC guitarist and co-founder Angus Young is known for his schoolboy uniform. But the Rock and Roll Hall of Famer is equally famous for his legendary performances. He lends the baby name Angus some serious edge.

Angus MacGyver has solved problems under pressure across the decades. The original MacGyver ran seven seasons, beginning in 1985. A reboot launched in 2016 and ended in 2021. While he’s often called Mac on the show, his first name matches his Scottish surname nicely.

There’s also child actor Angus T. Jones, of Two and a Half Men fame; BBC television presenter Angus Purden; and a handful of other uses.

1995’s Angus was a classic underdog story. It’s notable mostly because James Van Der Beek made his big screen debut as the bully who ends badly.

All of that sums up the baby name Angus nicely – it’s a little edgy and adventurous, but still quirky and surprising. No one expects to meet a baby boy called Angus.

Well, at least not in the US.

Until the middle of the twentieth century, the baby name Angus appeared on the fringes of the US Top 1000. But it left after 1948, and remains rare. Just 69 boys received the name in the year 2020 – not exactly zero, but very uncommon.

Elsewhere in the English-speaking world, the story is different. The baby name Angus ranks in the Scottish Top 100. It’s familiar elsewhere in the UK. And Australia and New Zealand seem to boast more Anguses than North America.

That makes the baby name Angus a Celtic cool possibility that’s just a little offbeat, too. It’s traditional and unexpected, easy to spell and pronounce without being even a little bit common.

What do you think of the baby name Angus?

Originally published on February 14, 2009, this post was revised substantially and re-posted on October 23, 2021. 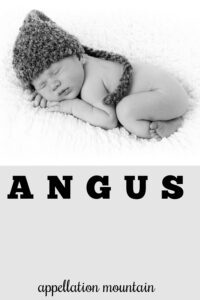