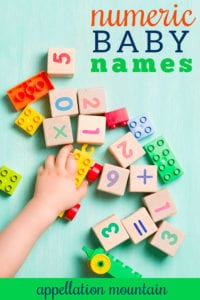 They work for so many reasons. Numeric baby names might commemorate a significant date (like your anniversary), symbolize good fortune, carry spiritual meaning, or even remember a favorite athlete’s jersey number.

These are some of the best number names, from the familiar to the unexpected.

INSPIRED BY NUMBER ONE

Multiple meanings and origins compete, but Hana means one in Korean.

In Italian, Primo means first, putting on the list of numeric baby names. It can also mean excellent. Something described as primo is the best. Italian author Primo Levi comes to mind.

Primrose means “first rose,” because the flower blooms early in the spring. (At least in some climates.) It’s also a name straight out of The Hunger Games novels, worn by the younger sister of heroine Katniss. Primrose Everdeen answers to the nickname Prim.

Una comes from the Latin word meaning one. It’s also an Irish name meaning lamb, sometimes spelled Oona instead. With Ava and Mia in the Top Ten, why not Una?

At first glance, this name fits with Felicity and Charity. It refers to a state of being one, and feels like a subtle virtue name. But what’s the statute of limitations on problematic bearers? Because Unity Mitford, of the aristocratic English family, is best remembered as a member of Hitler’s inner circle.

We think of brace as a verb that means something along the lines of hold on. (Think of “brace for impact.”) But it can also mean to hold things together, and because that can mean two things, brace has also referred to a pair, since at least the 1400s. Brace sounds like a strong, bright name for a son, too, and since it started out as a hunting term – and is now used in soccer – it feels outdoorsy and sporting.

The Latin name Secundus became Seachnall in Ireland. Mail Sechnaill meant “disciple of Saint Seachnall.” The latter became Malachy over the years, influenced by the Old Testament Malachi. So while it’s not obvious, Malachy ultimately comes from the Latin word for second.

Author Mark Twain took his pen name from an archaic term meaning two. On riverboats, “mark twain” meant that the water was two fathoms deep – the level required for a ship’s safe passage.

Along with Tre and Trey, Trace is traditionally used as a nickname for a III. If you know your Spanish numbers, tres is three.

On a similar note, Tripp comes from triple. It’s another nickname for a third.

It sounds like Tessa with an added ‘r’, but Tressa comes from a Cornish word meaning third.

Trinity refers to a Christian concept to describe God, but it comes from the Latin trinus – threefold.

This might be a stretch, but the sound is right there in quaDRUple.

In Roman numerals, IV means four. That makes Iver a possible subtle nod to the number.

Ives is cousin to Ives, and not numeric in meaning. But it looks like IV.

One more IV option: Ivy, literally the pronunciation of the Roman numeral IV.

Quade might come from the prefix quad, though it’s actually a form of MacQuaid, an Irish surname ultimately related to … Walter. Really!

Singer-songwriter Usher is really Usher Raymond IV. He passed the name down to his son, who is nicknamed Cinco – Spanish for five.

Does Five sound more like a name than Two, Three, or Four? Maybe. Or maybe it’s just our affection for middle ‘v’ names, from Ava to Oliver to Everett, that makes Five seem like it has potential.

A five-dollar bill was once called a fin. Amazing Race alums Ernie Halvorsen and wife Cindy drew on this story to nickname their son Ernest V “Finn.”

A nickel is worth five cents, so Nick- names seem like a natural nod to the number.

In Greek, penta- means fifth. (Think of the five-sided Pentagon.)

The sixth month of the year suggests the early days of summer, but also the number.

Juno gave her name to the month of June, so it might also suggest six.

It might not have made the list, but fans of 1990s series Blossom will think of Six Dorothy Lemeure, BFF to Blossom.

Sixtine sounds like sixteen, but it likely comes from a Latin word meaning polished. Or maybe it comes from sextus, meaning six.

Sixto comes from the same roots as Sixtine, and shares the same potentially numeric meaning.

In 2019, Seven debuted in the boys’ Top 1000 … along with Sevyn for girls. As numeric baby names go, Seven symbolizes good fortune. But it also suggests the seventh day in the Old Testament, when God rested. On a less spiritual note, the jersey number has inspired some parents – think of David Beckham’s Harper Seven.

Soraya is another name for the Pleiades, a star cluster in the constellation Taurus. By either name, they’re the seven sisters – daughters of Pleione. In Greek myth, their names are Maia, Electra, Taygete, Alcyone, Celaeno, Sterope, and Merope.

August means venerable, but it’s strongly associated with the eighth month. Augustus, Augustine, and Augusta are all August names that might also fit with numeric baby names.

An elaborate ancient name, Octavia comes from the Latin octo- meaning eighth. It was boosted, appropriately enough, by a sci fi television series called The 100. For boys, Octavian and Octavius could be choices, too.

It means eight in Malagasy, a language spoken in Madagascar.

A century ago, Nina was pronounced like nine-with-an-a. That’s not the name’s origin, but it feels appropriate.

Nova comes from the Latin word for new, and it points to the stars. But Nova also brings to mind the Latin novem – nine.

The Greek deka means ten, so names that include the sound – like Decker – could be obvious picks.

Dex refers to a factor of ten. We tend to think of it meaning right – as in Dexter – or skilled, as in dexterous, but it’s a number choice, too. If Jax works, why not Dex?

Dixie comes from the Latin dix, meaning ten. But associations with the Civil War might make this name problematic.

Tennyson comes from Dennis, but it includes the word “ten.” That makes it an easy fit.

INSPIRED BY NUMBER ELEVEN and UP

Netflix series Stranger Things introduced us to a mysterious girl known as Eleven. She trades Eleven for Elle, and then her birth name – Jane. But it sounds very much like traditional favorite Evelyn, as well as so many El- names we love for our daughters.

Could this be the perfect middle name to memorialize the year 2020? Children’s author Roald Dahl named his firstborn Olivia Twenty Dahl. Olivia came from Shakespeare; Twenty, from the fact that he had a twenty dollar bill in his pocket when he arrived at the hospital for her birth – or maybe for her date of birth, April 20, 1955.

What are your favorite numeric baby names? Would you consider any of these for a first or a middle name? 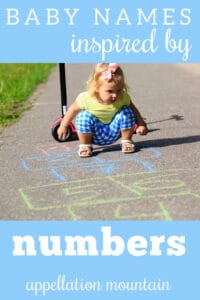 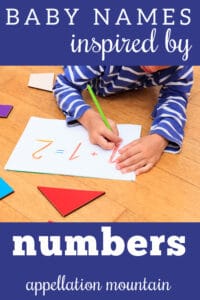